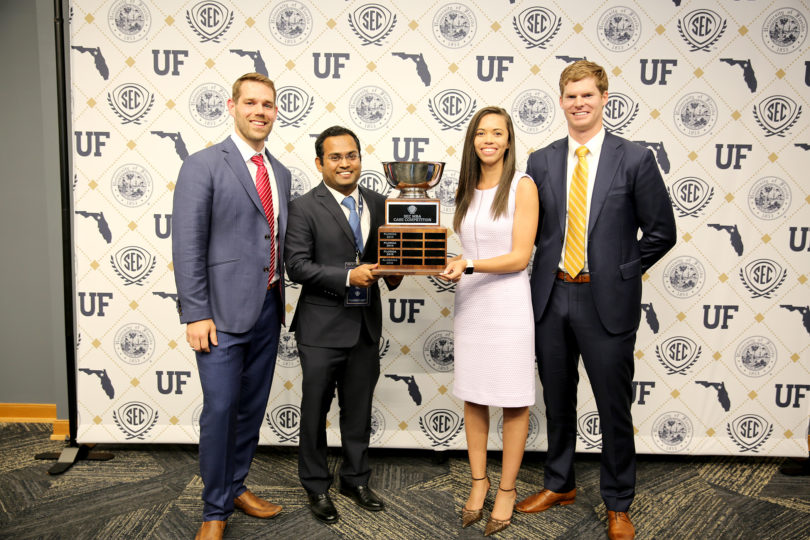 Teams were divided into four divisions and had 24 hours to develop a solution to a business issue facing Nationwide Insurance. Each team analyzed the company’s case, developed a strategy and presented their solutions to a panel of judges, including Nationwide executives.

“We had a really well-rounded team with different backgrounds and skill sets. That allowed us to create a comprehensive and convincing recommendation,” said Winterer, who was named Best Presenter in the competition’s opening round. “It also helped us during the Q&A. Instead of just one person answering a question, we’d build off of each other to drive our points home.”

UGA reached the finals by defeating Arkansas, Kentucky and Mississippi State in its divisional bracket. In the finals, UGA beat host school Florida, which finished in second, while Auburn finished third and South Carolina placed fourth.

“Our team was well prepared because we knew we would be facing tough competition,” said Anne Cooper, director of MBA student experience and case team advisor at UGA. “But I felt confident because they did their research on Nationwide with their faculty advisor, Jim Carson, ahead of time, and when it was time for them to present they knocked it out of the park.”

The Georgia team won $10,000 and got to bring the SEC’s traveling trophy to the Full-Time MBA Program’s new home in Correll Hall.

“It’s one of the best experiences I’ve had while at Terry,” Winterer said. “Creating a recommendation and presenting it in 24 hours is such an intense experience. It’s not easy to find a group of people you can work with from 7 a.m. one morning to 3 a.m. the next morning and be ready to present at 11 a.m. But we had a great team, and that made it a lot of fun.”

The SEC contest, in its fifth year, also promotes networking among graduate business students. MBA teams from each school have a chance to get to know team members from other MBA programs across the conference.

“Give Florida credit for being such great hosts,” Winterer said. “Everything was really well organized and that elevated this whole experience. Having said that, it’s always a good feeling to go down to Gainesville and leave with a win!”

The 2018 SEC MBA Case Competition will be held at Louisiana State University in Baton Rouge. It is one of several events overseen by SECU, the academic initiative of the Southeastern Conference.