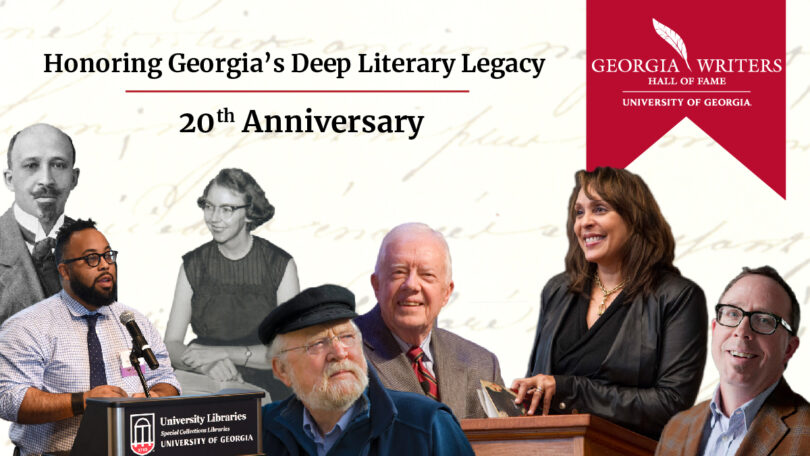 Terry Kay has had a lot of ideas in his life, and most of those developed into page-turning novels. But in the summer of 1999, one of his ideas wasn’t about creating books — it was about honoring the authors that came before him.

“I thought Georgia needed to be doing more to honor its writers, to honor its rich literary heritage,” said Kay, whose seventh novel was published that year. “Around the same time, I began to be aware that Georgia literature wasn’t being taught in the schools anymore and I thought that establishing an award that focused not just on a particular work by a writer but their whole lifetime of work was a good way to honor the remarkable writers who hail from Georgia or who have made Georgia their home and might encourage teachers of English to see what incredible writers we have right here in Georgia.”

Kay, a native of Royston who lives near Athens, brought up the idea in a conversation with leaders from the University of Georgia Libraries, including Mary Ellen Brooks, then-director of the Hargrett Rare Book and Manuscript Library. That conversation led to the creation of the Georgia Writers Hall of Fame to recognize Georgia writers – past and present – whose work reflects the character of the state, its land and people.

“As the library for the state’s flagship university, we felt that spotlighting Georgia writers would advance our teaching and public service mission. The university holds a number of collections of authors’ papers in our special collections library, including some of those who have been inducted into the Hall of Fame, along with extensive holdings of published works by Georgia writers.  So, it feels like a natural partnership for us,” said Toby Graham, university librarian and associate provost.

Twenty years later, the Libraries will celebrate the legacies of 69 Georgia Writers Hall of Fame authors with a special virtual event on Nov. 8 during UGA’s Spotlight on the Arts festival.

“I am enormously proud of being included among the honorees of the Georgia Writers Hall of Fame,” said Alfred Uhry, an Atlanta native who received two Tony Awards, an Academy Award and a Pulitzer Prize for “Driving Miss Daisy.” “The Hall of Fame is much more than name. It is a testimony to the rich literary inheritance of our state.”

Considering Georgia’s prolific literary history, choosing the inaugural class was a daunting task. To create the process, William Gray Potter, who was the university librarian and associate provost at the time, invited 12 individuals – academics, community leaders and “people of letters” – to serve on a Board of Judges for a period of three years. According to the setup, inducted authors would also serve a period of three years to ensure a changing perspective for each judging cycle.

The Board of Judges met on March 28, 2000, to select charter members of the Hall of Fame from a list of posthumous authors who were either from Georgia or who had produced a significant work or works while living in Georgia.

“We had originally planned to induct 10 posthumous authors for the charter class,” Brooks said, “but as is the case in most of the judging sessions, each judge had their favorites, and it was difficult to come to a consensus for only 10, so we changed the number of charter inductees to 12.”

The initial 12 authors ranged from humorist Augustus Baldwin Longstreet to activist W.E.B. DuBois and from Sidney Lanier to James Dickey. Some names, like Flannery O’Connor and Margaret Mitchell, were more well-known than others but that was part of the reason behind creating the Hall of Fame — to bring attention to writers whose names might have fallen out of the spotlight but whose literary contributions remain important.

That fall, the Board of Judges gathered once again to vote for the first annual class of inductees and selected Alice Walker and Byron Herbert Reece.

Since the induction of Walker and Reece, the Board of Judges has inducted 55 authors. The list includes Pulitzer Prize winners, as well as writers who have garnered some of the most prestigious creative awards in the United States, including the Academy Awards, Tony Awards, and Grammy Awards, a MacArthur “Genius” Grant, the Pulitzer Prize and numerous other national and international awards. The list even includes two Nobel Peace Prize recipients: civil rights leader Martin Luther King Jr. and former President Jimmy Carter.

“In 20 years, we’ve inducted poets, songwriters, journalists, humorists, essayists, novelists, playwrights, historians and activists. Our judges make an effort to recognize the depth and breadth of excellence in writing in the state of Georgia,” said Graham, who serves as an ex-officio member of the Board of Judges.

“Have we inducted everyone who should be in the Hall of Fame? Not yet,” Graham added, “but anyone can nominate an author, and once they’ve done so, the nomination carries over from year to year. So, if someone has been nominated and is eligible, there’s always a chance that they may be inducted. Our Board of Judges meetings always generate spirited discussion, and the judges’ decisions aren’t made lightly.”

In 2010, businessman and novelist George Montgomery and his wife, Nancy, established an endowment that supports the Georgia Writers Hall of Fame, and their donation also helped support the development of the Special Collections Libraries Building, where the collections involving Georgia authors are housed.

While there were no official inductees that year, the Libraries introduced a new logo for the Hall of Fame and created a new website at GeorgiaWritersHallofFame.org, featuring biographical and bibliographical material about each inductee, information about how to nominate an author for consideration, and video links to previous years’ induction ceremonies, the annual discussion series and one-on-one interviews with a number of the authors.

The Board of Judges chose not to induct new honorees in 2020 as well, planning a 20th anniversary celebration that would bring together many of the most acclaimed writers in Georgia. However, the COVID-19 pandemic forced the Libraries to pivot to a virtual event for its 20th anniversary program.

“I had really been looking forward to coming back to Athens for the celebration,” said Uhry, who now makes his home in New York City. “I haven’t been back to Athens since my induction in 2014.”

However, writers and enthusiasts throughout the United States can now join in on the celebration from their homes.

Part of UGA’s Signature Lectures Series, the Nov. 8 event features W. Ralph Eubanks, visiting professor of English and Southern Studies at the University of Mississippi. In a lecture titled “Georgia’s Literary Past and the Future of Southern Letters,” Eubanks plans to discuss the work of Georgia writers from the past to illustrate how the work of those writers fits on a continuum with contemporary writing and connects with the South’s now global culture. For more information on the livestreamed event, see the Events section of the Georgia Writers Hall of Fame website (www.georgiawritershalloffame.org).

Plans are underway for continuing the 20-year tradition into the future.

“Our judges will meet virtually sometime this fall to select the 2021 inductee class,” said Kat Stein, director of the Hargrett Library and ex-officio member of the Board of Judges, “and hopefully we will be able to welcome everyone to campus next fall for a big celebration.”