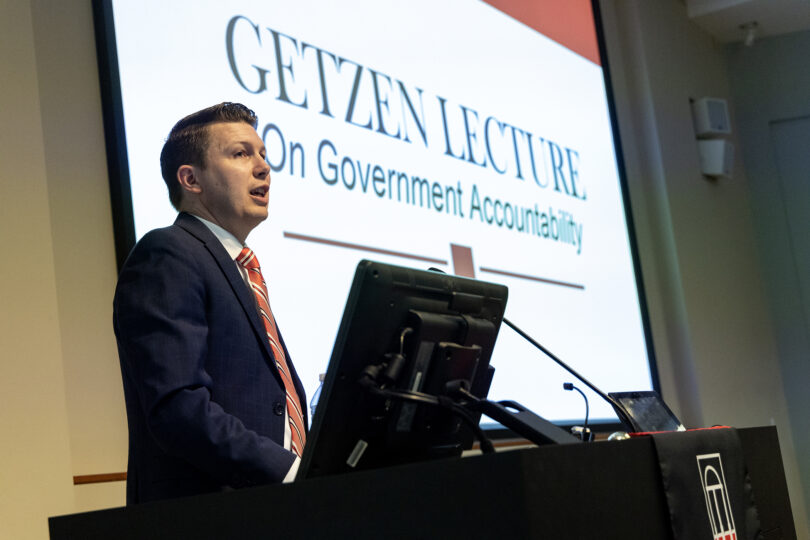 Tristan L. Leavitt, who is an attorney and a member of the Merit Systems Protection Board, delivered the 2022 Getzen Lecture on Government Accountability on Nov. 9. (Photo by Dorothy Kozlowski/UGA)

The Founding Fathers built a system of checks and balances between the executive, legislative and judicial branches of the United States government.

Tristan L. Leavitt discussed how that intra- and inter-branch accountability works in practice during the Getzen Lecture on Government Accountability, held Nov. 9 as part of the University System of Georgia’s 2022 Ethics Awareness Week.

“The ideal is to understand the significance of our Constitutional structure—why it’s built the way that it is and how it was designed to provide enduring government accountability through the centuries,” said Leavitt, who is an attorney and a member of the Merit Systems Protection Board.

Leavitt started with the framers, whom he said were acutely interested in government accountability, arguably founding the country because they could find no other way to hold King George III accountable.

Leavitt defined professional accountability as the obligation every employee everywhere has to serve and represent their employer well. The Merit Systems Protection Board oversees that accountability in the federal government. According to Leavitt, the removal of poor performers is the other side of the merit coin.

Intra-branch professional accountability is achieved through inspectors general. And inter-branch accountability, Leavitt pointed out, comes from a blending of powers and responsibilities between the branches. For example, a president can nominate government officials, Congress must consent to that nomination. Congress cannot manage those officials but can remove them, if necessary.

Additionally, Congress has a right to investigate operations from other branches to aid in future decisions about appropriations of money and new laws they may want to enact. Leavitt cited the example of Operation Fast and Furious, the gunwalking probe by the Bureau of Alcohol, Tobacco, Firearms and Explosives that led to arms reaching a Mexican drug cartel and the death of a U.S. border patrol agent. Eventually, the inspector general report concurred with what was found in the Congressional investigation, and most of the officials involved were replaced.

Leavitt also spoke on personal accountability—the idea that people can’t expect public officials to be completely honest if they’re not willing to be as honest as they can be in their own lives.

“Yes, public officials should be held to a higher standard in some ways, but, at the most basic level, those who serve in government don’t just represent the population they’re drawn, they’re representative of us. Thus, taking responsibility for one’s actions isn’t a matter of they or them. It’s a matter of me and you,” Leavitt said.

The event also was named one of the university’s fall 2022 Signature Lectures and was sponsored by the School of Public and International Affairs’ public administration and policy department.