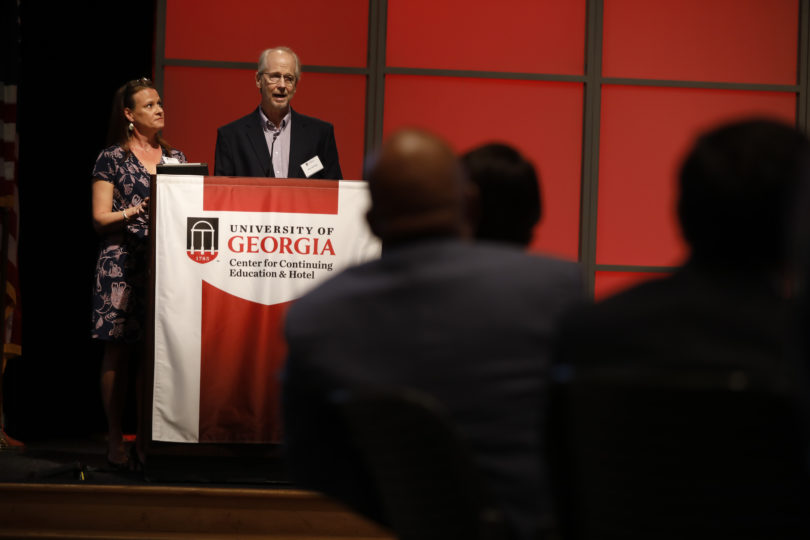 This year’s kickoff breakfast highlighted the Athens Community Council on Aging, a nonprofit organization that focuses on enriching the lives of older residents in the 27 counties of northeast and eastern Georgia. (Photo by Andrew Davis Tucker)

Starting and ending about a month sooner this year, the annual Campaign for Charities is now open for University of Georgia faculty and staff to donate to their favorite nonprofits in Athens-Clarke County, across the state and around the nation and world.

The campaign runs until Nov. 26 this year, ending about three weeks earlier than usual. Faculty and staff should keep this in mind and consider donating before the Thanksgiving holidays as a way to “give back” to more than 1,100 organizations before the end of 2019.

“When I moved to Athens several years ago, I found it extraordinary how many residents in the Athens community were involved and dedicated to the greater success of this community,” said Karri Hobson-Pape, vice president for marketing and communications and this year’s honorary campaign chair.

“It may sound obvious, but it’s not. When meeting people for the first time in other cities, they typically ask you about your family, your children and your work,” Hobson-Pape said during the annual kickoff breakfast at the Georgia Center for Continuing Education & Hotel on Sept. 26. “But here in Athens, when I first moved here, a remarkable number of people asked me about which nonprofits I planned to be in and what organizations I planned to dedicate my free time to.”

This year’s goal is to raise $400,000 and increase employee participation.

“This is a very important initiative for the University of Georgia each and every year,” said UGA President Jere W. Morehead, who highlighted the university’s top marks during the 19 years of the campaign as one of the five entities in the state with the highest dollar amounts raised.

“Obviously, though, we can do better, and we must do better for our community and the communities we serve all around the world,” he said. “Your gifts make a difference in the lives of so many individuals, and it’s important for each and every one of us to be a part of this campaign—at some level and in some way.”

This year’s kickoff breakfast highlighted the Athens Community Council on Aging, a nonprofit organization that focuses on enriching the lives of older residents in the 27 counties of northeast and eastern Georgia. Last year, the group provided services to 16,000 adults, served 82,000 meals through the Meals on Wheels program and gave 20,000 rides to grocery stores and medical appointments.

“Over 50 years ago, the Athens Community Council on Aging was founded by a group of concerned citizens who recognized that there wasn’t an organization serving the needs of older adults, and many of our founding members were faculty from UGA,” said ACCA’s CEO Eve Anthony. “Our partnership with the university has grown since then, and we are so appreciative.”

All UGA employees will receive information about this year’s campaign from their department representatives. Faculty and staff are encouraged to return pledge cards via campus mail or the campaign website (https://busfin.uga.edu/budget/campaign_charities/). The forms are confidential. Beginning in October, weekly drawings will give away prizes such as parking passes, athletic event tickets and bookstore gifts to early pledges.