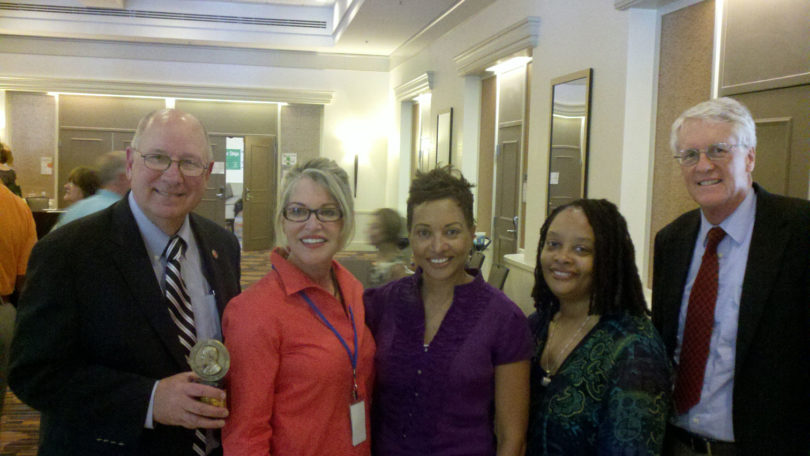 Glen Finland receives the Dean's Medal for Leadership Excellence in Communication from faculty members in the UGA Grady College of Journalism and Mass Communication. Standing left to right are E. Culpepper "Cully" Clark

Athens, Ga. – Glen Finland, author of the memoir Next Stop, was presented the Dean’s Medal for Leadership Excellence in Communication from the University of Georgia Grady College of Journalism and Mass Communication Sept. 2 at a reading from her work at the Decatur Book Festival in Atlanta.

Finland, a 1974 alumna of the Grady College, is the sixth recipient of the medal.

The college’s highest honor, the Dean’s Medal was established in 2007 to honor alumni who play a significant role in a communications event that rises to the status of a case study in one of the journalism and mass communication disciplines. The medal recognizes singular achievement and leadership.

Finland’s memoir, Next Stop, is based on her May 2009 Washington Post Magazine feature story that explores her relationship with her third son, David, who has autism. A memoir of her family, Finland’s story narrates her son’s upbringing, the uniquely individual dynamics of families with special needs children and insights she gained in learning to let go of her son. The book has been named as the Penguin Book Club Pick for National Disability Employment Awareness Month.

Finland’s recognition heralds Grady College’s “Year of the Story,” which was recently announced by Dean Cully Clark and is a celebration and homage to the tradition of storytelling as a unifying theme for the work of the college.

“Storytelling is central to human experience and communication across our disciplines, from advertising and public relations to journalism and media arts,” Clark said. “We are proud to honor the tradition in this academic year, and Glen’s story exemplifies the power and influence of the story to advance thought and understanding.”

Parker Middleton, assistant to the dean, added, “Glen’s story speaks to what we strive to teach and inspire at Grady. The book is a singular achievement in a demanding genre. It adds to our understanding of autism as a public health issue and family challenge through a moving story. As will other commemorations of storytelling at the college in the year ahead, recognition of Glen’s beautiful memoir highlights the story’s art, power and way of creating communities of experience, mind and heart.”

Formerly a TV news reporter, Finland shifted focus to her freelance work as an advocate for autism. Her articles have been featured in several publications, including the Washington Post, Family Circle, Autism Speaks, Babble.com and American Magazine, as well as NPR and CNN. She is the recipient of the Southeastern Writers Association Best Fiction award and a Noted Writer award from the 2005 and 2006 Boston Fiction Festivals. She holds a master’s degree in writing from American University and is married to Grady Fellow and alumnus Bruce Finland.

UGA Grady College
Established in 1915, the UGA Grady College of Journalism and Mass Communication offers undergraduate majors in journalism, advertising, public relations, digital and broadcast journalism and mass media arts. The college offers two graduate degrees and is home to the Knight Chair in Health and Medical Journalism and the Peabody Awards, internationally recognized as one of the most prestigious prizes for excellence in electronic media. For more information, see www.grady.uga.edu or follow @UGAGrady on Twitter.