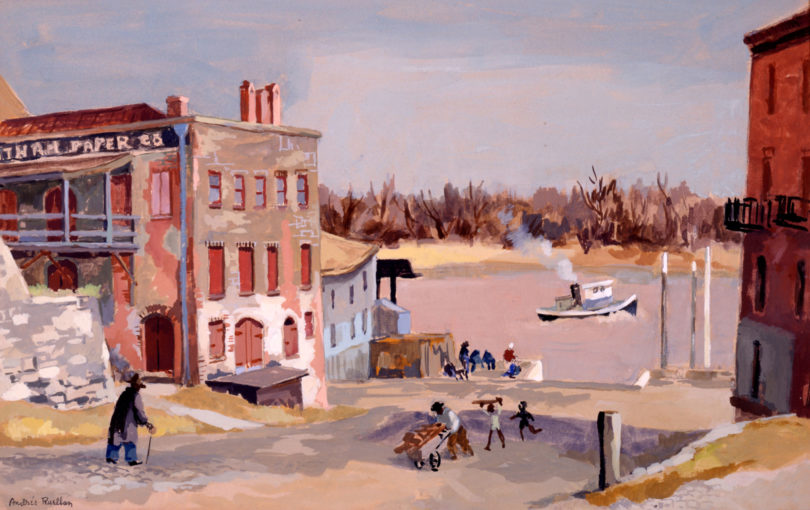 The Georgia Museum of Art is exhibiting a selection of American watercolors from its permanent collection until Aug. 7. The exhibition was organized by Paul A. Manoguerra, chief curator and curator of American art. Due to the fragile nature of these works, most of which were executed on paper, they are not often displayed in the museum.

“The permanent collection at the Georgia Museum of Art includes several stellar examples of watercolors by American artists,” said Manoguerra. “This special display presents our patrons with the opportunity to enjoy works by some American masters of the medium.”

While some of these images were exhibited occasionally before the expansion of the museum, this collection features two brand-new acquisitions. Acquired in 2010, Howard Thomas’ Third Ward (1943) and Raymond Peers Freemantle’s untitled watercolor (Horse and Cart in Town Scene, ca. 1930s or 1940s) have never been displayed in the museum.

Three of the watercolors were part of the original collection of 100 works donated by Alfred Heber Holbrook in 1945 to establish the museum. Holbrook was the founder and first director of the museum and a driving force behind its success, according to Manoguerra. The works are Frederic Remington’s “Ashtrakhan Cossacks” (ca. 1894), John Marin’s Mountain and Meadow, Hoosic Mountains, Massachusetts (1918) and William Zorach’s Maine Lake at Dawn (1926).

Many of the other works have not been up since the museum reopened in January, although five are featured in the museum’s recently published book One Hundred American Paintings, by Manoguerra, which coincided with the reopening. One of these paintings, Robert Bechtle’s Palm Spring Chairs (1975), will be displayed for the first time since its loan to the San Francisco Museum of Modern Art for its exhibition Robert Bechtle: A Retrospective in 2005.

Some of the painters used these watercolors as drawings or compositional studies. Other works, including Palm Spring Chairs, are the intended finished products.