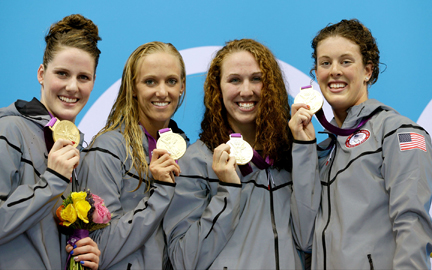 Swimmers dive back into classes after medal-winning performances at Olympics

After making a splash in London this summer, half of Team USA’s Olympic gold-medal winning 4×200-meter freestyle relay team returned to classes at UGA last month.

Allison Schmitt, a psychology major who won five total medals, and Shannon Vreeland, an economics and international studies major and first-time Olympian, returned to campus with their gold medals in tow right along with their school books.

“They’re in my backpack,” said Schmitt, of her Olympic hardware.

While the U.S. and UGA swim teammates share a common success, each has a distinct story to tell of her Olympic experience and return to Athens.

Schmitt headed into the Olympics with high expectations and certainly met those, winning three gold medals along with a silver and a bronze.

Given her Olympic success, Schmitt could have cashed in, left UGA and enjoyed some of the same professional opportunities afforded to other Olympic stars.

But she chose to put those on hold, returning to school to earn her degree and compete with the university swim team.

“I love swimming for whatever is on my cap,” she said. “I’m honored to come back to Georgia for my last year and swim with the ‘G’ on my cap. I’m excited to get back in the water with this team. I think we have great things ahead for us, and I’m proud to be a Bulldog.”

Head UGA swim coach Jack Bauerle said he knew all along that Schmitt would be returning.

“There was never even a doubt about it. She loves Georgia and she’s the kind of kid you always want to have on your team,” he said. “She’s great for everyone, not just herself.

“The opportunities will be there for her after she finishes and puts her hand on the wall at the last relay at Georgia, too,” said Bauerle.

Schmitt, who has a bubbly, offbeat personality, appears to be reveling in the spotlight.

“I always wanted to be famous,” she said, seemingly sincere and joking at once.

But she shrugs off the notion that she has reached A-list celebrity status yet.

Even with the attention, getting back to school has not been too difficult, she said, even after a year away from classes. During the 2011-2012 academic, Schmitt trained in Baltimore alongside Olympic superstar Michael Phelps.

As an experienced student-athlete, Schmitt has gotten used to mustering the focus needed for the classroom even after the excitement in London.

Time management, she said, is the key to staying ahead in her classes as she faces increased commitments to public events and media inquiries because of her success.

When describing Vreeland’s college success, Bauerle said, “Shannon came in here as a pretty good swimmer, but she came in on an academic scholarship, too.”

Even as late as May, Vreeland had doubts she would get the chance to compete for a medal.

“I’ve been waiting for kind of a breakout summer,” she said. “I guess I just really hit my (stride) at the right time.”

Weeks after winning, Vreeland is still absorbing that success.

“It’s obviously not an experience that I thought would have happened,” she said.

She even describes her performance in the gold-medal winning event almost as if she were an observer.

“Just being able to get to the Olympics, making it to the final relay and getting to watch Allison [who swam the final leg of the relay] break the Olympic record was really cool,” Vreeland said.

Schmitt reminded her, “But it was you, too.”

Both swimmers are aiming to compete in the 2016 Olympics in Rio de Janeiro, Brazil.

Vreeland plans to go to graduate school, but will be swimming along the way.