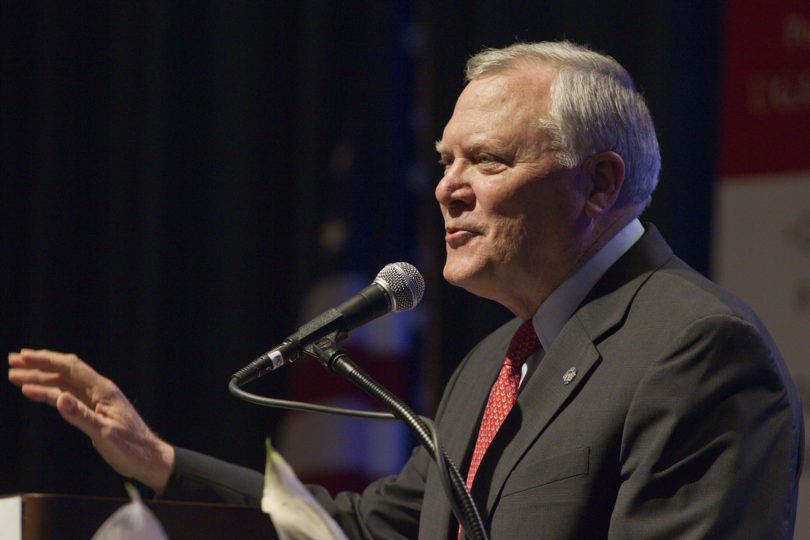 Athens, Ga. – Gov. Nathan Deal cited the strong partnership between the University of Georgia and state economic development agencies as a major component of Georgia’s job-creation program during a speech Monday afternoon in Athens.

“We could not have achieved what we have done in Georgia without our local partners working together with us,” Deal said in his address, titled “Georgia’s Economic Future and How UGA Can Help Make It Brighter.”

The governor spoke following a luncheon where Jennifer Frum, UGA vice president for public service and outreach, recognized faculty and staff for excellence in service to the university and to the state. The Public Service and Outreach Meeting and Awards Luncheon kicked off the university’s Honors Week celebration, April 7-12.

Deal was welcomed and introduced by UGA President Jere W. Morehead, who has made UGA’s economic development role a cornerstone of his administration.

In his address, the governor touted both the competitive initiatives undertaken through his office and the economic development efforts led by the eight UGA Public Service and Outreach units such as the UGA Small Business Development Center. The SBDC last year alone consulted with entrepreneurs managing 4,000 small businesses that employ 3,000 people in Georgia, he said.

Deal pointed out that another UGA Public Service and Outreach unit, the Carl Vinson Institute of Government, has worked closely with his office on economically beneficial projects such as a program to eliminate the state sales tax on electricity used in manufacturing and the Governor’s High-Demand Career Initiative. The career initiative offers business leaders the opportunity to inform college and university officials of what kinds of skills will best prepare graduates for success in the job market.

“I think it’s going to be one of the things that gives the State of Georgia a leg up when it comes to creating jobs,” Deal said.

Georgia remains America’s best state for businesses partly through its workforce preparation efforts, and that work requires the cooperation of universities and technical colleges, Deal said. State government encourages that cooperation in a number of ways, such as increasing HOPE scholarship funding and providing tuition grants for critical technical skills such as practical nursing, welding, health technology and early childhood education.

“We have asked the technical college system to put an emphasis on degrees where jobs are going to be available,” Deal said.