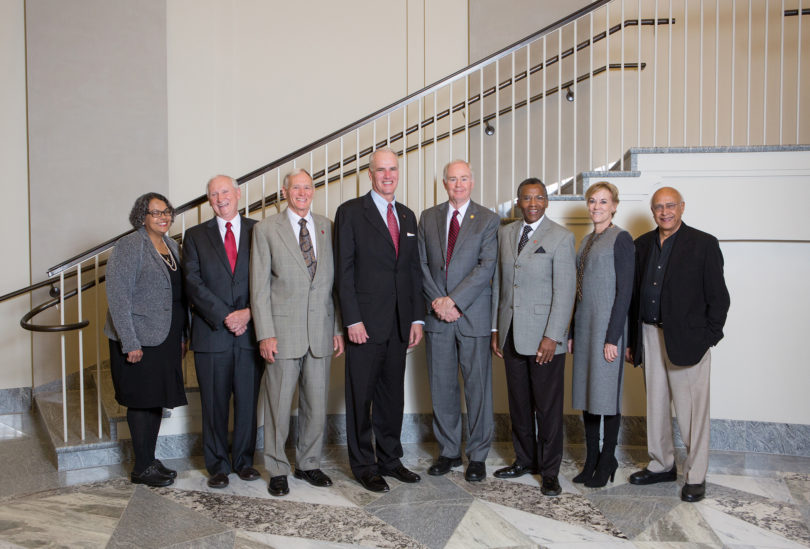 Athens, Ga. – The University of Georgia Graduate School has honored 12 graduates with the 2015 Alumni of Distinction Award for achieving exceptional success in their professional careers and in service to their community. The awards were presented on Oct. 22.

Recipients have been recognized in their professional fields at the regional, national and international levels as evidenced by publications and awards received, serving as mentors and roles models in their profession, and contributing to their local and global communities. Their achievements exemplify the UGA mission, “to teach, to serve, and to inquire into the nature of things.”

The recipients of the 2015 awards are:

Benjamin Brackett, of Athens, is a retired professor and department chair of physiology and pharmacology at UGA. He pioneered the first repeatable in vitro fertilization and influenced the first IVF production of animals and humans both nationally and globally. Brackett also initiated the first successful application of IVF to overcome human infertility in Georgia. He established Reproductive Biology Associates, an infertility clinic, in 1983, and celebrated the 30,000 babies conceived when the clinic celebrated its 30-year anniversary in 2013.

Leroy Evans Bynum, of Schenectady, New York, is the current dean of the School of Arts and Humanities at the College of Saint Rose in Albany, New York. Previously, Bynum was dean of the College of Arts and Humanities at Albany State College in Albany, Georgia. Bynum remains active as a teacher, researcher, director and performer in the field of music, including more than 20 recent vocal performances and directing opera productions. Bynum researches German songs (lieder) and has received a Fulbright Fellowship toward their study.

Ronald Lane Goode, of Dallas, Texas, is the president and CEO of The Goode Group, a pharmaceutical consulting firm. He has had leadership positions in a number of global pharmaceutical companies, including Pharma-Links, Unimed Pharmaceuticals, Searle Corporate and Pfizer Pharmaceuticals. Goode supervised clinical development programs at these companies that led to the approval and production of pharmaceuticals such as Zyrtec, Day-Pro, Arthotec, Zoloft and Ambien. Goode volunteers with Mercy Ships, an all-volunteer organization that brings health care to developing nations.

James Nels Ihle, of Memphis, Tennessee, is the department chair of biochemistry and is the Edward F. Barry Endowed Chair in Biochemistry at St. Jude’s Children’s Research Hospital Inc. He also teaches biochemistry at the University of Tennessee in Memphis. Ihle is responsible for the first-time purification of the cytokine interleukin 3, which are proteins that enhance the natural response of the body to disease. He also discovered the essential role of Janus kinase in the actions of all cytokine receptors.

Randy William Kamphaus, of Eugene, Oregon, is the dean of the College of Education and a professor at the University of Oregon. He is best known for his research in classification methods, differential diagnosis, and assessment of learning disabilities and attention-deficit/hyperactivity disorder. He co-authored the Behavior Assessment System for Children, which caused educators and psychologists to rethink how children’s academic, behavioral and emotional development is diagnosed. Kamphaus has also served as president of the American Psychological Association’s Division of School Psychology.

Robert McTeer, of Frisco, Texas, is the director of both Westwood Holdings Group and Beal Bank. He also serves as the economic adviser to Commerce Street Capital. He is the former chancellor of the Texas A&M University System. McTeer was the 11th president of the Federal Reserve Bank of Dallas, a member of the Federal Open Market Committee, and previously served with the Richmond Federal Reserve as head of its Baltimore branch. He was a distinguished fellow at the National Center for Policy Analysis.

Laura Jean Meadows, of Atlanta, is the director of the Carl Vinson Institute of Government, which provides technical assistance, applied research, technology solutions, and training and development services to governments in Georgia and internationally. Prior to her work with UGA, Meadows was appointed as the first executive director of the OneGeorgia Authority. She also served as the commissioner of the Georgia Department of Community Affairs, assistant secretary of state, and state director of the U.S. Department of Agriculture’s Rural Development program.

Hala Gaines Moddelmog, of Atlanta, is currently the president and CEO of the Metro Atlanta Chamber. Prior to her appointment at the Metro Atlanta Chamber, she led several other brands to “household name” status. She was named president of Church’s Chicken in 1995, where she grew the brand into the third largest chicken restaurant in the world. She then became the president and CEO of Susan G. Komen for the Cure, the world’s largest grassroots network, in 2006, and was named president of Arby’s Restaurant Group in 2010.

Marcia E. Mulkey, of Westchester, Pennsylvania, is a visiting scholar at the Temple University Beasley School of Law for the 2015-16 academic year. Previously, she served in several senior level legal and executive programs at the Environmental Protection Agency. She has also had assignments with the United Nations Food and Agriculture Organization, working with the Dutch government. Mulkey was awarded the EPA’s top career service award and has twice received Presidential Rank Awards, which serves as the top recognition system for career government executives.

Carl Weston Myers, of Los Alamos, New Mexico, worked at the Los Alamos National Laboratory, retiring in 2005, where he led the Earth and Environmental Sciences Division for 12 years. He also served as senior technical adviser with the International Programs Office, Office of Civilian Radioactive Waste Management, and U.S. Department of Energy with an emphasis on Russia. He advocates for the expanded use of underground space for underground nuclear parks to enhance the safety, security and economics for siting nuclear power reactors.

Antonio Enrique Puente, of Wilmington, North Carolina, teaches psychology at the University of North Carolina, Wilmington and is a visiting professor at the Universidad de Granada in Spain. He is the author or editor of eight books, 87 book chapters and 112 journal articles that focus on the interface between culture and neuropsychology. Puente is the founder and editor of the Neuropsychology Review, the Journal of Interprofessional Care and the Journal of Interprofessional Education & Practice. He also authors a book series in clinical neuropsychology.

Michael Tomasello, of Leipzig, Germany, is the director of the Max Planck Institute for Evolutionary Anthropology in Leipzig, Germany. He also teaches psychology at Duke University. Tomasello’s major research interests focus on the processes of social cognition, social learning, cooperation and communication in human children and great apes. In addition to numerous journal articles, Tomasello has written seven books related to his research interests and has also received multiple national and international awards in recognition of his work.

The Graduate School Alumni of Distinction Award was established in 2012 by the University of Georgia’s Graduate Education Advancement Board and the first recipients were named in 2013. All UGA graduate alumni are eligible to be considered for the annual award.