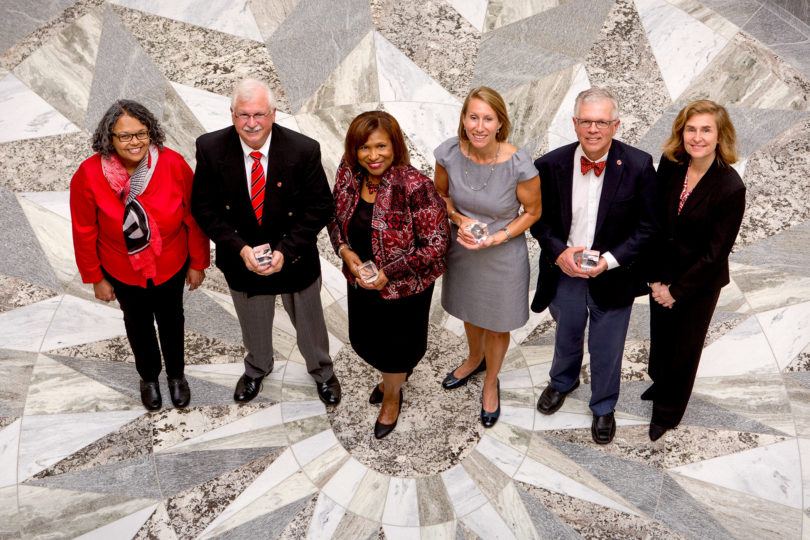 Athens, Ga. – The University of Georgia Graduate School has honored eight graduates with the 2016 Alumni of Distinction Award for achieving exceptional success in their professional careers and in service to their community. The awards were presented at a reception and dinner in their honor on Oct. 20.

Recipients have been recognized in their professional fields at the regional, national and international levels as evidenced by publications and awards received, served as mentors and roles models in their profession, and contributed to their local and global communities. Their achievements exemplify the UGA mission, “to teach, to serve, and to inquire into the nature of things.”

The recipients of the 2016 awards are:

James W. Andrews Jr., of Savannah, was one of the first four scientists at the Skidaway Institute of Oceanography, and founded Savannah Laboratories and Environmental Services in 1980, which became the largest environmental testing laboratory in the world. Andrews served as the director of research for the Cardiovascular Council and the Curtis Hames Evans Count Heart Study during the 1970s and 1980s, discovering breakthroughs in heart disease research among Southeasterners.

Martin D. Chitwood, of Atlanta, is a senior partner of Chitwood Harley Harnes LLP and is recognized as a leader in the fields of securities litigation and corporate governance reform. Chitwood served as a commanding officer of a Special Forces A-Team, and became one of the most decorated junior officers in the Vietnam War, receiving the Air Medal, Bronze Star Medal, Combat Infantryman’s Badge and Vietnam Jump Wings.

Ariel Deutch, of Nashville, Tennessee, is the James C. Blakemore Professor of Psychiatry and Behavioral Science and professor of pharmacology and program in neuroscience at Vanderbilt University School of Medicine. Deutch’s research focuses on central dopamine systems and their involvement in the pathophysiology of schizophrenia and Parkinson’s disease. He currently holds positions as chief scientific adviser and chair of the National Parkinson Foundation’s Clinical and Scientific Advisory Board.

James K. Farr, of Seattle, Washington, served as principal scientist in the Office of Response and Restoration, Environmental Response Division, National Ocean Service during his time at the National Oceanic and Atmospheric Administration. Farr provided scientific expertise in responding to hundreds of chemical and oil accidents, including the Deepwater Horizon oil spill and the aftermath of Hurricane Katrina, and aided the FBI in developing a database to track and prevent the use of chemical substances.

R. Steve McCallum, of Knoxville, Tennessee, is professor of school psychology in the department of educational psychology and counseling at the University of Tennessee, where he previously served as department head for 22 years. McCallum has served at the state and national level as an officer in school psychology organizations. He co-founded and is consulting editor of the Journal of Psychoeducational Assessment and was elected a Fellow of the American Psychological Association.

A. Allen Seals, of Ponte Vedra Beach, Florida, is a clinical and interventional cardiologist and the managing partner and director of clinical research at Baker and Gilmour Cardiovascular Institute. Seals focuses on coronary angioplasty and patients with acute coronary syndrome and acute myocardial infarction. He was elected chair of the American College of Cardiology Board of Governors and secretary of the board of trustees, the main governing body of the American College of Cardiology.

Alvetta P. Thomas, of Fayetteville, is the current president and former vice president of academic affairs of the Atlanta Technical College. She was an education specialist at the U.S. Department of Defense, teacher and curriculum specialist in the Savannah-Chatham County Public Schools and adjunct professor at Alabama State University. Thomas has received honors from the National Science Foundation and the U.S. House of Representatives and was named one of Atlanta’s 25 Most Influential Women.

Mary Salmon Walker, of Tucker, currently is an environmental consultant, and previously served as assistant director and COO for the Georgia Environmental Protection Division in the Georgia Department of Natural Resources. While there, Walker established a legally defensible buffer around coastal salt marsh, implemented groundwater withdrawal reductions in coastal Georgia, improved the state’s certification process for new reservoirs, and worked with South Carolina on a management strategy for the Savannah River.

The Graduate School Alumni of Distinction Award was established in 2012 by UGA’s Graduate Education Advancement Board; the first recipients were named in 2013. All graduate-level UGA alumni are eligible to be considered for the annual award.