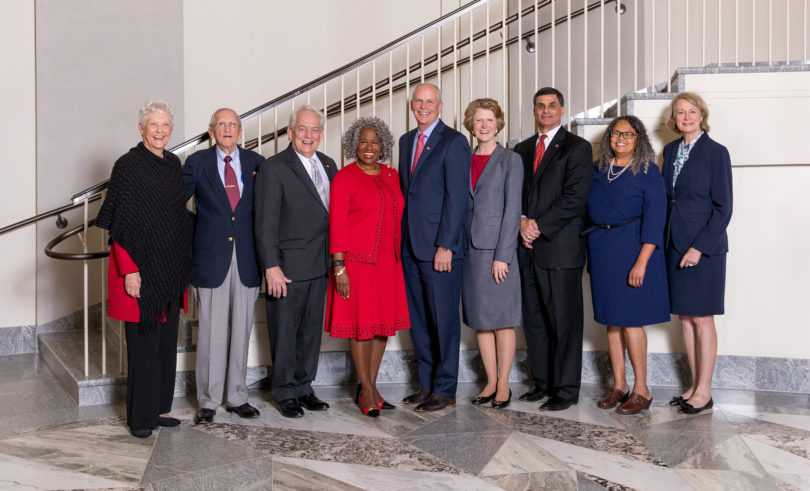 The University of Georgia Graduate School has honored eight graduates with the 2018 Alumni of Distinction Award for achieving exceptional success in their professional careers and in service to their community.

Award recipients have accomplished meritorious achievement and success in their professional field, exemplify themselves as a mentor and serve as a role model in their profession, and have made substantive contributions to their professional field at the regional and national levels as evidenced by honors earned in the profession. The professional achievements and contributions to society made by these graduate alumni exemplify the University of Georgia mission, “to teach, to serve, and to inquire into the nature of things.” All graduate-level UGA alumni are eligible to be considered for the annual award. The Graduate School Alumni of Distinction Award was established in 2012 by UGA’s Graduate Education Advancement Board; the first recipients were named in 2013. This year’s awardees are:

Alan Campbell, of Athens, merges art and science as he travels the globe, creating paintings that depict varied locations like the ice of Antarctica, the biodiversity of Peru’s tropical rainforests, and the barrier islands of coastal Georgia. His work has been sponsored and supported by Mobil Oil, the United States Embassy, Patagonia and the Turner Foundation. Campbell has lectured in the U.S., Chile and New Zealand and was elected as a fellow to the Explorers Club in New York. Campbell received a Master of Fine Arts in 1975.

Frank McGill, of Tifton, is a retired UGA Extension agronomist and peanut specialist. McGill helped develop a multidisciplinary “package approach” for peanut production in Georgia, increasing the state’s peanut yield by more than 2,000 pounds per acre in less than 20 years. McGill was a D.W. Brooks Distinguished Professor of Agronomy at UGA and named Man of the Year by Progressive Farmer Magazine. He was also inducted into the Georgia Peanut Hall of Fame and received the Lifetime Achievement Award from the American Peanut Council. McGill received of Master of Science in agronomy in 1962.

Allison Moran, of Atlanta, joined her family’s 80-plus-year-old business, RaceTrac Petroleum Inc., in 1994. Beginning in the company’s operations department, Moran was promoted to vice president of human resources and later senior vice president. In 2013, she succeeded her father as chief executive officer of the company, a position she held through 2017. She remains a member of the board of directors. Moran has been recognized as Shelby Report’s Woman Executive of the Year, Convenience Store News’ Retail Executive of the Year, and was inducted into the Convenience Hall of Fame in 2017. Moran received a Master of Education in early childhood education in 1991.

Monica Kaufman Pearson, of Atlanta, is the first woman and first minority to anchor the daily evening news in Atlanta. She worked for 37 years at the leading station, WSB-TV, winning more than 33 Southern Regional and local Emmy Awards. Upon her retirement, she was honored on the floor of the U.S. House of Representatives for her years of service, both on and off the air. Pearson currently hosts a weekly radio music and talk show, conducts Closeups Interviews for WSBTV.com, and hosts Georgia Public Broadcasting’s “A Seat at the Table.” She received a Master of Arts in journalism and mass communication in 2014.

Frank Ros, of Kennesaw, was the vice president of Hispanic strategies at the Coca-Cola Company, a role that included developing and implementing strategy to develop the company into a leading corporate citizen within the Latino community. Ross received the company’s Chairman’s Exemplary Award for transforming Coca-Cola Presents Art of Harmony, an urban community relations program, into a nationally recognized and award-winning program. He also served on the Coca-Cola Company Multicultural Leadership Council and was chosen as one of Hispanic Business’ 2011 “100 Influentials in the U.S.” Ros received a Master of Education in business education in 1984.

Jeffrey Shellebarger, of Houston, Texas, joined Chevron in 1980 as an exploration geologist in New Orleans, Louisiana. He assumed the role of president of Chevron’s North American Exploration and Production Co. in 2013 and is responsible for Chevron’s oil and gas exploration and production operations in the U.S. and Canada. He previously served as the managing director of Chevron’s IndoAsia business unit, executive director of Chevron Pacific Indonesia, general manager of asset development for Chevron’s Southern Africa strategic business unit, and general manager of asset development for Chevron North America’s San Joaquin Valley strategic business unit. Shellebarger received a Master of Science in geology in 1980.

Garnett Stokes, of Albuquerque, New Mexico, became the 23rd president of the University of New Mexico in 2018. She previously served as interim chancellor, provost and executive vice chancellor for academic affairs at the University of Missouri; provost and executive vice president for academic affairs and interim president at Florida State University; and as faculty, department chair, and dean of UGA’s Franklin College of Arts and Sciences. Stokes’ research incorporates biographical information in job selection and promotion decisions. She has helped businesses, government agencies and Fortune 500 companies develop hiring procedures using this information. Stokes received a Master of Science in psychology in 1980 and a doctorate in in industrial and organizational psychology in 1982.

Susan C. Waltman, of New York, New York, is the executive vice president for legal, regulatory and professional affairs for the Greater New York Hospital Association, which represents the interests of 150 hospitals and health care systems across the New York region. Walton serves on the boards of the UGA Foundation and the UGA Research Foundation and acts as a volunteer ambassador for UGA in the New York area. She has served on the advisory boards of the university’s Honors Program and College of Public Health and hosts interns from UGA at GNYHA each summer. Waltman received a Master of Social Work in 1975.