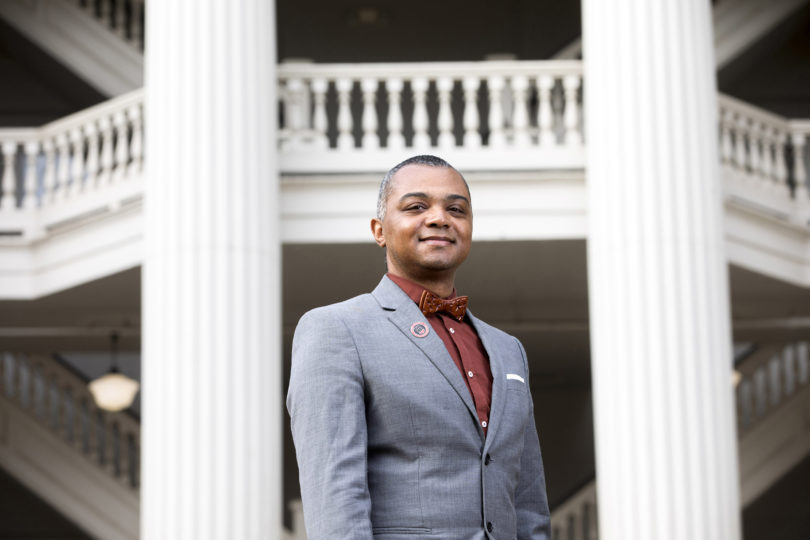 Marques Dexter was named a Fulfilling the Dream Award recipient for his efforts to help others and his work in diversity and inclusion. (Photo by Dorothy Kozlowski/UGA)

Marques Dexter has won multiple awards, but the one that means the most to him is the 2020 President’s Fulfilling the Dream Award he received on Jan. 17 at the Martin Luther King Jr. Freedom Breakfast.

Dexter is a fourth-year doctoral candidate in the College of Education’s kinesiology department with a specialization in sport management and policy. Last month’s Freedom Breakfast was the third one he has attended. When he saw the awardees at his first breakfast, he recalls saying to himself, “That’s the kind of impact I want to have. Before I graduate, I want to win this.

“I know what this award meant for others and the people who’ve come before me,” Dexter said. “It means I’ve helped to cultivate a loving community and made an impact on this community, and I’m honored to hear that what I’m doing has made this institution proud, as it shows others have respect for what I’ve done and appreciate me for being me.”

Dexter grew up in Philadelphia, where he competed in track and field, and his love for the sport made him interested in coaching. He graduated from Robert Morris University with a bachelor’s degree in business administration with an emphasis in sport management.

When he was looking at graduate programs, Dexter toured UGA and fell in love with the campus. His first class was with Billy Hawkins, a professor of kinesiology who is now a faculty member at the University of Houston.

“I realized you can study people involved in sports through their gender and race, and that really became my passion and interest,” Dexter said.

After graduating from UGA in 2009 with a master’s degree in kinesiology, Dexter got a coaching job at SUNY Cortland, where he also served as the team’s recruiting coordinator. Within this role, Dexter discovered many of the African American athletes were matriculating to college either unprepared or didn’t fully grasp what it would take to be successful.

“Their athletic talents were glorified more than making sure they would be successful academically or socially,” Dexter said. “I couldn’t help them as a coach. It was too late when they got to me. I realized I had to do something if I wanted to see change.”

Dexter wanted to pursue his doctorate, but with the economic downturn after graduation, his funding fell through. His mentors still referred to him as “Dr. Dexter,” and when one of them passed away, he decided it was time to pursue his dream. Dexter returned to UGA in 2016.

“I believe in the importance of being visible as a black [male] leader, as you don’t see a lot of them,” he said. “It’s important for me to be involved and to be visible, so others can see people who look like them be in these positions. I’ve fallen in love with UGA, and it’s given me so much. This is a way for me to give back and to effect change.”

Dexter, a member of Kappa Alpha Psi Fraternity, Incorporated, has been highly involved since his return to Athens. A 2019 initiate into UGA’s Blue Key Honor Society, he is part of Kappa Delta Pi educational honor society, former Graduate Student Association executive board member, leads the College of Education’s Black Men’s Group, is a graduate student member of the Black Male Leadership Society and former president of the Graduate and Professional Scholars student organization.

Additionally, he is an ambassador for the College of Education and a member of its Diversity, Equity and Inclusion Conference Planning Committee. Dexter also works as the social media manager and assistant to the store director for the UGA Bookstore. Within the Office of Institutional Diversity, he currently serves as the graduate assistant for academic success and program coordinator for the Georgia African American Male Experience, or GAAME, program.

“Helping others achieve helps fulfill my dream,” he said. “I had to do a lot of getting to college on my own, and I want to show others they can achieve what they want to do.”

His research focuses on the experiences and identities of academically and athletically high-achieving black male athletes. Using visual methods, he looks at the way academic, athletic and racial identities are affected by students’ experiences and the factors they contribute to their success.

Ultimately, he wants to use his research to continue shifting efforts of support away from deficit standpoints so that black males, particularly those who are athletes, can be seen as diverse individuals and supported holistically.

“Within collegiate athletics, we often care more about wins and money, but the academic prowess of the individuals and institutions is also important,” he said. “It’s not just about those who are not performing well, we can’t ignore those who are successful. I’m trying to alter these normalized narratives.”

As he looks ahead, he is applying for faculty positions, but also looking at administrative roles involving diversity and inclusion.

“The future is always unknown, but as long as I’m having fun and helping people achieve their dreams, I’ll be happy,” he said.