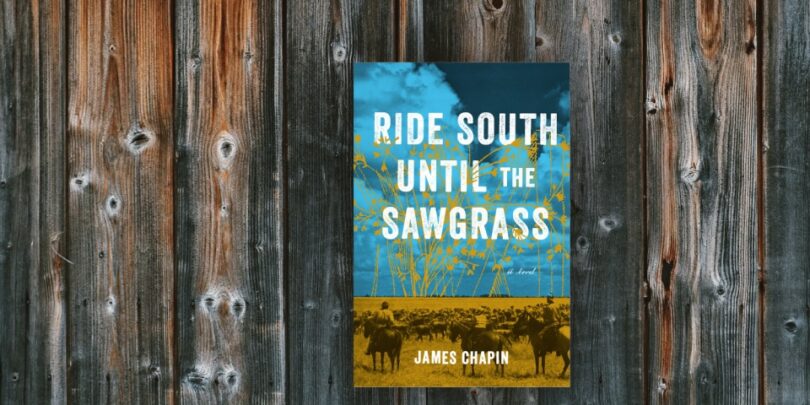 If all you know of Florida is beaches and theme parks, there’s a whole lot you don’t know about the state.

Its reputation as a vacation destination came about relatively recently in its history. For generations prior, Florida was a largely untamed wilderness. Its early inhabitants were members of the Seminole tribe and, as European settlers moved onto the land, cattle ranchers.

Given the harsh surroundings and two very different philosophies of living off the rugged landscape, you can imagine these two groups weren’t the best of friends. But these relationships can make for good stories, which is exactly what James Chapin aims to do with his debut novel, “Ride South Until the Sawgrass.”

Chapin is a master’s student at the University of Georgia Warnell School of Forestry and Natural Resources where he’s studying social-ecological resilience in forests. His book officially launched earlier this week with a virtual event hosted by Avid Bookshop in Athens.

While Chapin’s book was written before he became a student at Warnell, the subject matter is very much entwined in his studies.

“These might seem far apart, but they’re really not. I feel like the two efforts really feed into one another,” says Chapin, who plans to graduate this spring. “This book is very much a tribute to the landscape that I was a part of and worked to conserve and uphold. A lot of the book is about looking at this place that we have around us—which, in Florida, is very different now than it was in the 1800s.”

While the story is fictional, the surroundings it details are very real. “Ride South Until the Sawgrass” tells the story of two families struggling to survive in the relentlessly harsh but also beautiful Florida environment. The families take two different approaches to living on the land—one living with humility, the other at the expense of the land and fellow people. At the time, cattle ranching was increasing on Florida’s vast grasslands, intensifying the hostility between the original inhabitants and the new settlers.

“I feel like telling a story about the place itself can help to make us feel more connected to it,” Chapin adds. “We’re more apt to live on it in a way that is healthy and ecologically sensible.”

Before coming to Warnell, Chapin worked in land management and conservation in Florida, specifically using prescribed fire. The experience gave him a deep understanding of the state’s complex landscape and helped to inspire the book. Chapin imagined himself living in the 1800s—with all the basic challenges the era presented—and then inserted himself into Florida’s untamed landscape.

The book borrows from historical fiction and Florida’s wildness lends itself to the Western genre, but the book, just like Florida, is a bit of its own character.

These days, Florida has the longest history of cattle ranching of any state thanks to the vast prairies across its midsection. Humans have helped to sculpt that landscape over time, using fire to maintain forests, cattle to keep the grasslands maintained and canals to control flooding. But all of those attempts to turn nature into a well-oiled machine can be upended by one of Florida’s storms or other environmental surprises.

It is this dynamic between the natural occurrences and human attempts to control that Chapin explores in the book.

And in real life.

“Something I’ve gained more background in since I’ve been at Warnell is understanding the ecological process. And the complexity of it—it’s a very complex system,” he says. “It’s easy to mistreat a place if you don’t know its history. But as people who are trying to make use of natural resources, seeing it in its wholeness and its complexity is sometimes what we need to do.”