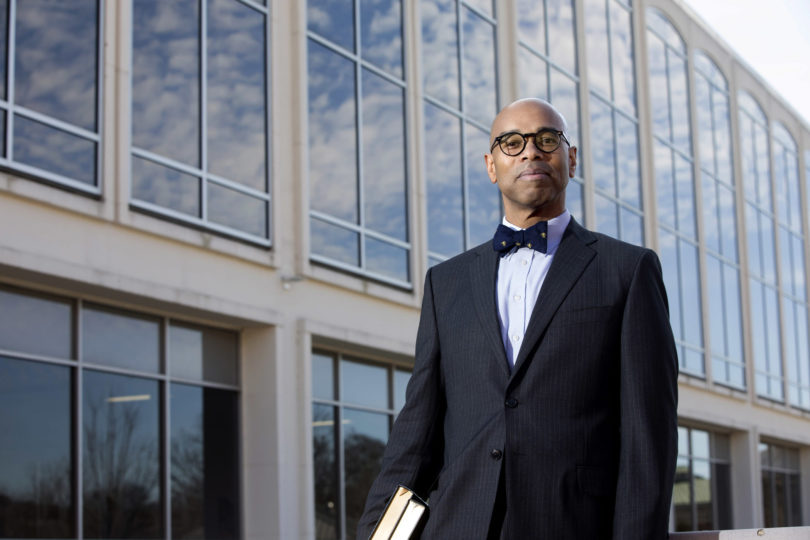 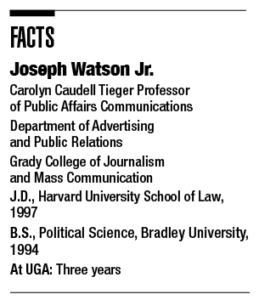 Watson, who spends his days teaching about public advocacy, issues management and shaping public opinion in political contexts, focuses on the ideals of individuals who have helped guide his professional path.

“Encouraging civility and civil discourse are my true motives,” Watson said, explaining not only what guides him but also what characterizes his heroes.

He is proud that his list of heroes is bipartisan and includes Mother Teresa, William F. Buckley Jr., Robert F. Kennedy and Martin Luther King Jr., among others. And then there are material nods to his other heroes, including his penchant for bow ties, a tribute to the late Democratic Sen. Pat Moynihan, and his black, horn-rimmed glasses modeled after those worn by Atticus Finch in the film To Kill a Mockingbird.

It was Watson’s father who planted the seed of a career related to politics at an early age.

Watson grew up in a household where his father, a union steelworker, followed Democratic politics and regularly watched shows like Meet the Press on television.

An ideology class in college led him to reexamine his political leanings, with a new fascination for conservatives like former British Prime Minister Margaret Thatcher and later, former Housing Secretary Jack Kemp.

It was also during this time that Watson started tutoring students in economics and realized the satisfaction that comes from teaching.

“I am most comfortable prepping others,” Watson said. “I like working behind the scenes, and I get a natural high from working with young people to help them achieve their goals.”

Two years out of law school, Watson began working on Capitol Hill where he served as the legislative director for Sen. Peter Fitzgerald, which led to an appointment working on internet policy in the George W. Bush administration. A move to the private sector in 2005 brought him to Exelon, a Fortune 100 energy company, where he ultimately served as the director of public advocacy.

Three years ago, the urge to teach returned to Watson, and he left Exelon to serve as the Carolyn Caudell Tieger Professor of Public Affairs Communications. The Public Affairs Professional Certificate program is offered in partnership with the School of Public and International Affairs and is the first of its kind in the country, offering an education that promotes a holistic combination of political science, journalism and public relations courses for undergraduates.

Watson also relishes the special topics courses he teaches, including one on civil rights and his current class on the women’s rights movement taught for the centennial of the 19th Amendment that gave women the right to vote.

“Martin Luther King Jr. and Susan B. Anthony used public affairs communications to achieve their objectives and create an environment where those laws were passed,” he said. “I teach my students to use those same tools.”

“One of the most important lessons I can teach is how to renormalize bipartisan relationships and friendships,” Watson said. “It’s important at an early age for students to get comfortable with people they may not see eye to eye with and have meaningful conversations.”