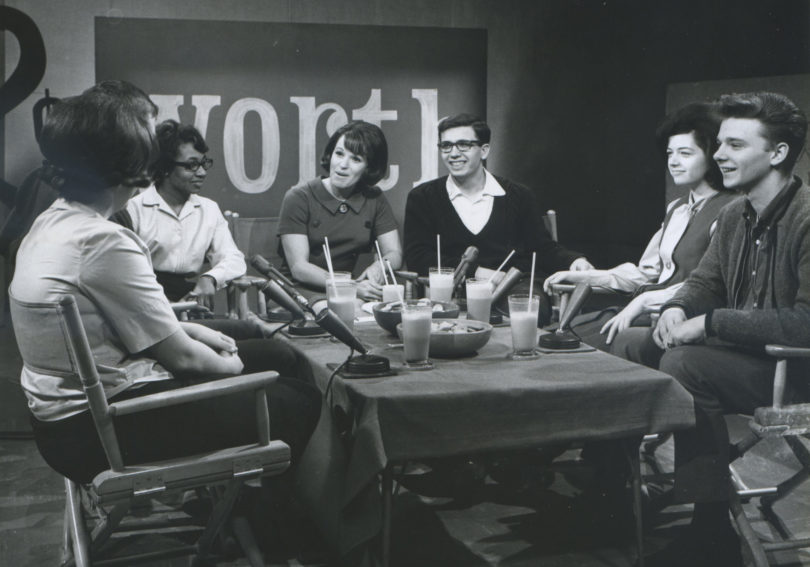 Teenagers discuss issues of the day on WTTW's "Your Two Cents Worth" from 1965.

Some 4,000 hours of programming produced by public radio and television stations between 1941 and 1999 will be digitized and made available to the public, thanks to a federal grant for the Brown Media Archives at the University of Georgia Libraries.

UGA’s archives and the WGBH Educational Foundation will partner with the American Archive of Public Broadcasting to administer the grant from the National Historical Publications and Records Commission to preserve and provide access to the programs, all of which were submitted to the George Foster Peabody Awards.

By adding the programs to the archive, this project will ensure that preservation copies are maintained at the Library of Congress for posterity. This will also expand access from only on-site at the Brown Media Archives to the American Archive of Public Broadcasting’s public website and on-site research locations.

“Each program was submitted to the Peabody Awards by its creators as an exemplar of their finest work. These materials were made for the benefit of the American public, but the American public has not had access to them,” said Ruta Abolins, Brown Media Archives director. “This project rectifies that situation. By preserving and providing access to these programs, we ensure that the original investment of public money in the creation of these programs pays off by extending the value of the work.”

Peabody online exhibits
In addition to the Special Collections Libraries, American Archive of Public Broadcasting staff will work with the Peabody Media Center to curate two online exhibits focused on topics or events of historical significance that showcase the Peabody Awards Collection alongside local and national news, public affairs, and cultural programming contributed by other AAPB participating organizations. When the project is complete, the Peabody Media Center will also present a series of public screenings of Peabody Awards Collection programs digitized through this project.

“This programming is unique, not only for its rarity, but because it derives from what local and public programming producers deemed their ‘best’ work,” said Jeffrey P. Jones, Peabody Awards executive director. “While the Peabody Award itself is well-known, the wealth of these programs considered for the award has largely been forgotten. Such materials hold the potential to reshape our understanding of television history and American culture. Most scholarship on broadcast history has focused on network programming, which is better known and easier to access.”

The collection
This collection contains programs created by over 230 different radio and television stations in 46 states plus Puerto Rico and the District of Columbia; 173 of the included programs are Peabody winners.

“As a collection, this group of titles presents an unparalleled archive of public broadcasting diversity and excellence, not accessible elsewhere. By expanding public access to this collection, we will broaden understanding of our collective past. The collection also will be an important source for the study of public media,” said Mary Miller, Peabody Awards archivist.

These were for the most part not broadcast nationally, so most readers will not have heard of most of them, Miller said.

A sampling of the titles includes:

Research opportunities
The breadth and depth of the materials selected for preservation under this project will create opportunities to explore diverse topics and also allow researchers to deeply examine given topics from a variety of perspectives. Even the oldest programs contain content of current relevance; even the regionally focused productions have national value. For example, Connecticut Public Radio’s “One on One” series (a 1986 winner) sought “to make science understandable to everyone, including science haters.”

“Today we see widespread conflict over interpretations of scientific data and questioning of fact; broadening an appreciation for science still matters,” Miller said, citing other examples of continuing relevance. “AAPB and the Peabody Awards Collection allow scholars to explore regional approaches to issues of national concern and to compare yesterday’s coverage to today’s headlines. Among the titles chosen for inclusion in this project are over 100 programs that look at issues of policing, crime and police-community relations.”

Many other UGA faculty members use archival materials for their courses, and having these programs digitized will greatly improve their chances of being used for student research and classroom instruction at UGA, said Miller.

The Brown Media Archives was established in 1995 at UGA with the Peabody Awards Collection as the foundation of its holdings. The BMA has grown to include regional news, film, home movies, interviews and folk music, among other audio and moving image genres. The collection has evolved to include cable content, international programming, web content and streaming programming. In addition to the recorded media itself, most submissions include documentation such as press releases, clippings, scripts, audience feedback and ephemera.