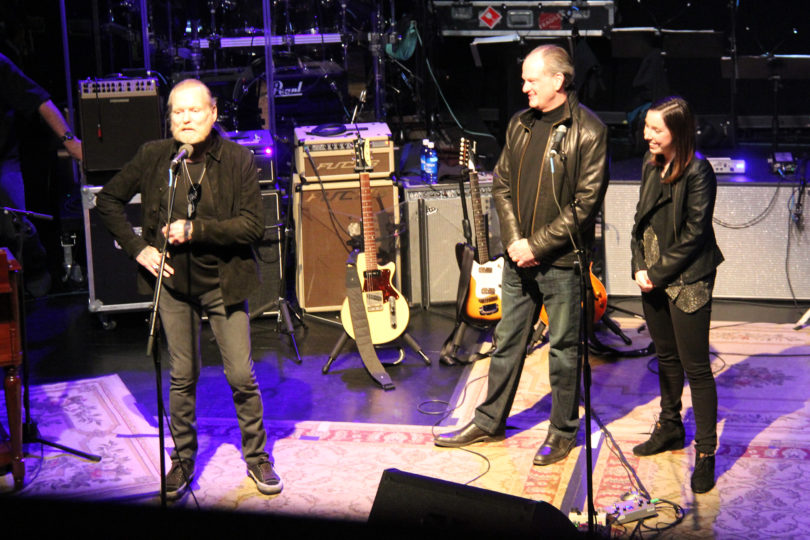 A sold-out house at the Georgia Theatre greeted UGA senior Katie Black in early January as she walked onstage with Gregg Allman. Her job was simple—introduce the legendary rock and blues musician prior to a performance in Athens and thank him for establishing a scholarship that will help fund the remainder of her time at UGA.

They were joined by Alan Dorsey, dean of the UGA Franklin College of Arts and Sciences, who announced the significant endowment in the Hugh Hodgson School of Music to establish the Gregg Allman Music Scholarship.

From the stage, Allman spoke a few words about the personal importance of his endeavor.

“But later on you realize that you can do things for other people while just doing what you love to do,” Allman also said. “And why not pay it forward? This was such a pleasure for me.”

Black, the scholarship’s inaugural recipient, is a music performance major. She works on her vocal talents in the Hodgson School and hones her knowledge of the music industry through the Music Business Program in the Terry College of Business.

“This scholarship will, of course, help fund the remainder of my college career. But the whole experience also has just been so encouraging,” she said. “Facing the ‘real world’ after college is something I’ve been anxious about all year, but knowing that so many people believe in me has really helped me to believe in myself.”

Black performs with the UGA Hodgson Singers and other on-campus choirs and plans to pursue a career in arts administration while continuing to sing in choirs and semi-professional settings.

“Meeting Gregg Allman at the Georgia Theatre was so amazing,” Black said. “He was so calm, gracious and down-to-earth. His welcoming demeanor really calmed my nerves before going on stage. It was such a pleasure to meet him face to face, and introducing him to the sold-out crowd was an experience I will never forget.”

Scholarships for students in the arts are increasingly important, said Dale Monson, director of the Hodgson School of Music. “For students seeking a career in the arts, in music, finding scholarship support can be the very key that unlocks the gate of opportunity. Music is such an intense and demanding major, and scholarship support helps our students focus on the skills and coursework that lead to a productive career.

“The vision and generosity of Gregg Allman in establishing this scholarship helps our students to build those bridges that will enable them to succeed in the real world, in a productive career,” Monson also said. “His interest in our educational efforts will bring opportunities to generations of deserving students, and we are enormously grateful.”

The scholarship was one result of a successful Gregg Allman tribute concert at the Fox Theatre in January 2014. Allman and band manager Michael Lehman decided to use the proceeds to benefit the future of music at Syracuse University, where Lehman’s daughter currently attends, and UGA, a place near and dear to Allman, who has a history in Georgia and currently resides in Richmond Hill, near Savannah.

“From the Spotlight on the Arts collaborations to the long list of esteemed rock musicians who call Athens home, the connections between UGA and the music community have never been stronger or more vibrant,” Dorsey said. “We are so glad to have Gregg Allman as part of this community and celebrate his gracious decision to endow this new scholarship.”