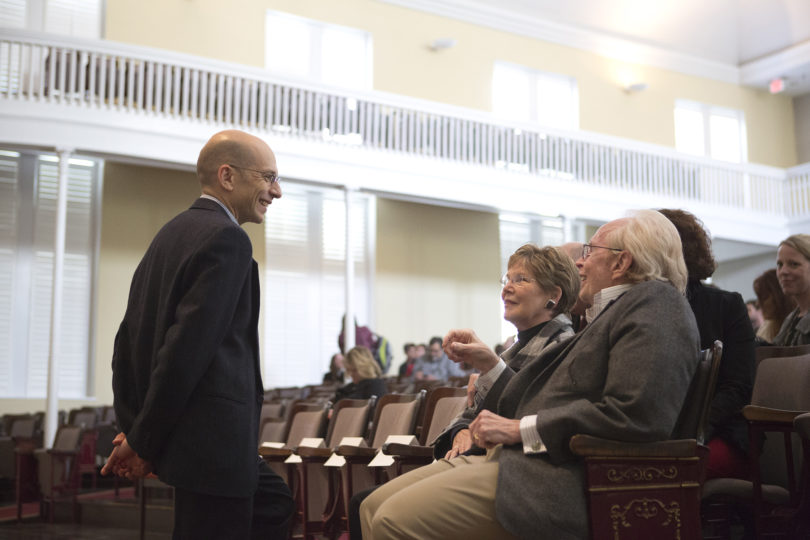 Edward L. Ayers, president of the University of Richmond, muddied the waters of the supposedly clear picture of the Civil War battle at Gettysburg during the 2013 Gregory Distinguished Lecture in the Chapel on Oct. 24.

An expert in Southern and Civil War era history, Ayers said that while the great Civil War battle was a momentous event, the militaristic significance of the battle is often overstated-meanwhile, the political and cultural impacts often are forgotten.

“Americans have long seen the battle of Gettysburg as the beginning of the end of the Civil War,” Ayers said.

Historically speaking, it’s important to remember, he said, “that there were as many months after this battle as there were before in the Civil War, and that more men were killed after Gettysburg than were killed before that battle.”

The Gregory Lecture was sponsored by the Amanda and Greg Gregory Civil War Era Studies Fund. Before the lecture began, UGA President Jere W. Morehead thanked the Gregorys, who were in attendance, for their support for the lecture as well as their broader support for the history department and the university.

During Ayers’ stay at UGA, he also spent time as a visiting scholar in the history department, hosting a seminar for graduate students as well as ­consulting on the new Digital Humanities Initiative.

In his lecture, Ayers painted a vivid picture of the political, social and logistical realities that the nation faced leading up to the battle at Gettysburg. Confederate Gen. Robert E. Lee’s goals in entering Pennsylvania in 1863 were just as much to score a symbolic win and find food and resources for his soldiers as they were to gain a military advantage. In the military campaign, the South was trying to “bring war to the North” to win a political victory against President Abraham Lincoln to weaken his election chances.

Though the Confederate Army ultimately suffered a crushing defeat at Gettysburg, its eventual surrender, which brought the end of the Civil War, was far from certain after the battle, according to Ayers.

Instead, he argued, the great impact of the battle of Gettysburg was largely “theatrical.” Part of that outcome was a political victory for Lincoln’s re-election in 1864, which, Ayers argued, probably kept the Civil War on track to preserve the Union and abolish slavery. As a Civil War scholar, Ayers argues that too much historical focus is placed on the war’s battles.

“The vast space and time in between those battles get lost,” he said. “The places that were not in front of the conflict tend to be forgotten. As a result, I think we miss a large part of the Civil War by this intense focus on battles.”