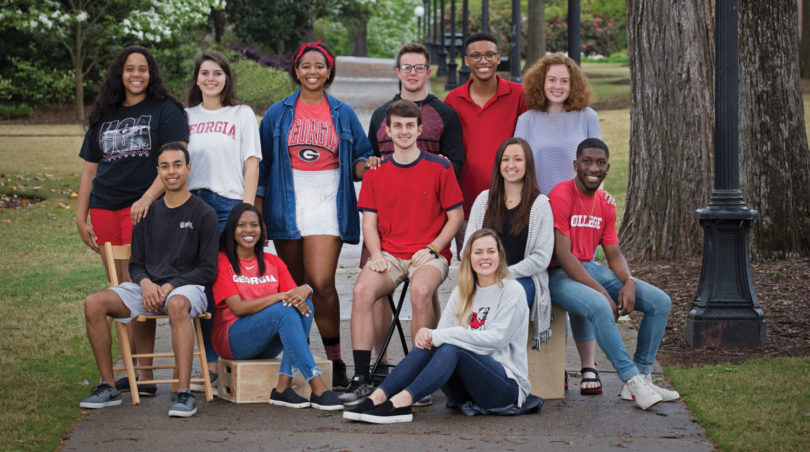 Thousands of visitors come to campus every year and many of them are greeted by one of the University of Georgia Visitors Center's tour guides. (Photo by Peter Frey/UGA)

UGA's student tour guides are the face of the university to thousands of prospective students and other visitors to campus each year. They take their job seriously but have fun doing it.

That’s how long you have to tour a campus of 730-plus acres. To take in the culture of more than 35,000 undergraduates. To discover the academic rigor of one of the nation’s best public universities. To experience the place you may call home for the next four years. All in 75 minutes.

It’s a daunting task, but you’re not going at it alone. 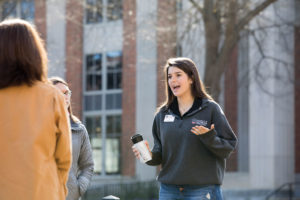 “I have a special place in my heart when I meet a kid who’s in-state and looking at Georgia, but doesn’t know much about us. I get to show them the academic opportunities, the research, the study abroad, the internships, all of that, but that we’re also this really cool community of people.” — SK Lasseigne, a rising fourth-year from Roswell (Photo by Dorothy Kozlowski/UGA)

“Remember, our mascot is the Bulldog, not the Chihuahua!” she yells, waking up the guests on the 9 a.m. campus bus tour. Few of them know quite what she means, but they will soon learn. “I want to hear barks that sound like Bulldogs!”

SK raises her arm and teaches the riders how to Call the Dawgs as they pull up to North Campus, where their journey of learning about the history, statistics, and opportunities at UGA begins.

Had you asked SK four years ago where she’d be today, Athens would probably not have been the answer. “When I ended up choosing UGA, I was surprised. It was unexpected,” she says.

SK grew up in Roswell, just 75 miles from Athens, and she knew many of her classmates would attend UGA. But she wanted to branch out. She traveled from the northeast to New Orleans visiting schools but never bothered touring the one an hour and a half down the road.

But she quickly realized the academic and scholarship opportunities at UGA were unparalleled.

“I realized just how much this school has to offer.”

Today, she uses her story as a connection point with students from across the state who may not know the caliber of education and the array of opportunities at UGA.

“I have a special place in my heart when I meet a kid who’s in-state and looking at Georgia but doesn’t know much about us,” she says. “I get to show them the academic opportunities, the research, the study abroad, the internships, all of that, but that we’re also this really cool community of people.”

SK is one of 67 guides at the Visitors Center, which has employed almost 500 students since it opened in 1996. It’s a selective group; each year, hundreds of applications flood the center, but only about 25 new tour guides are added annually.

The tour guides are some of the most academically accomplished students on campus, and they’re also plugged into the community service and networking scenes.

SK, a rising fourth-year, balances three majors, participation in multiple service organizations, and sorority membership. She mentors freshmen through the Student Government Association, she’s on the executive board for the Dean William Tate Honor Society, and she was selected to be an orientation leader this summer. 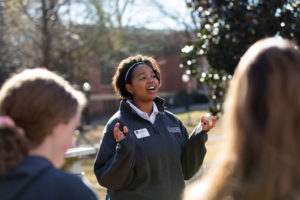 “The University of Georgia can be daunting. I ask my groups, ‘what are you scared of?’ Because once that fear gets out of the way, they can really open themselves up to what they can learn here.” — Sydney Guiion, a rising second-year from Wilmington, North Carolina (Photo by Andrew Davis Tucker/UGA)

Same with Sydney Guion, a new tour guide and rising second-year public relations major with sociology and Spanish minors from Wilmington, North Carolina. She’s on the Student Government Association Student Forum, was on her hall council, and she’ll be a Dawg Camp counselor this summer. She also cheers on the Dawgs as a member of the Spike Squad. As someone who has always been heavily involved, she made a deal with her parents that she would only join three clubs her first year as to not over-extend herself.

“I’m on way more email lists than three,” she laughs.

Student tour guides are the face of the university for thousands of families and prospective students who visit campus every year. But they aren’t delivering a routine sales pitch—when it comes to facts and figures, Georgia sells itself.

The mission of the UGA tour guides is to lend a thoughtful, personal voice to the intimidating idea of life after high school and to show prospective students what it’s like to be a part of the University of Georgia community.

“The University of Georgia can be daunting,” Sydney says. “I ask my groups ‘what are you scared of?’ Because once that fear gets out of the way, they can really open themselves up to what they can learn here, what they can give this university, and what the university can give back to them.”

The tour guides are becoming increasingly important as interest in the university continues to grow.

In 2018, the Visitors Center hosted nearly 44,000 guests, a 32 percent increase from the previous year. The uptick in interest isn’t surprising; UGA recently rose to  No. 13, its highest ranking ever, on U.S. News & World Report’slist of best public colleges. And the success of multiple athletic programs helped skyrocket the university to the national stage.

With more attention on Georgia, the country’s best and brightest are looking to Athens as their potential collegiate home.

The Visitors Center and the Office of Undergraduate Admissions have partnered to create an all-inclusive UGA visit experience. Prospective students and their guests hear presentations from admissions officers who can answer the nuts and bolts questions of the application process and university statistics, and then they hop on a bus to hear the personal stories of the tour guides while exploring the picturesque campus.

“We wanted to work with the Visitors Center to make the experience all about the student,” says Amanda Sale, senior associate director of admissions for marketing and recruitment. “We wanted to build a journey from the moment they set foot on campus to prepare them to apply but also to give them a taste of what it’s like to be a student at UGA.”

By joining forces, the Office of Undergraduate Admissions and the Visitors Center have streamlined the campus visit process for prospective students, giving them a comprehensive introduction to things like the application process, the academic requirements, and scholarship opportunities before their tour. The consolidation of information helps Sale and her team keep in touch with students after their visit, so when application time rolls around, qualified students across the nation are reminded of their trips to Athens and of the myriad opportunities at Georgia. 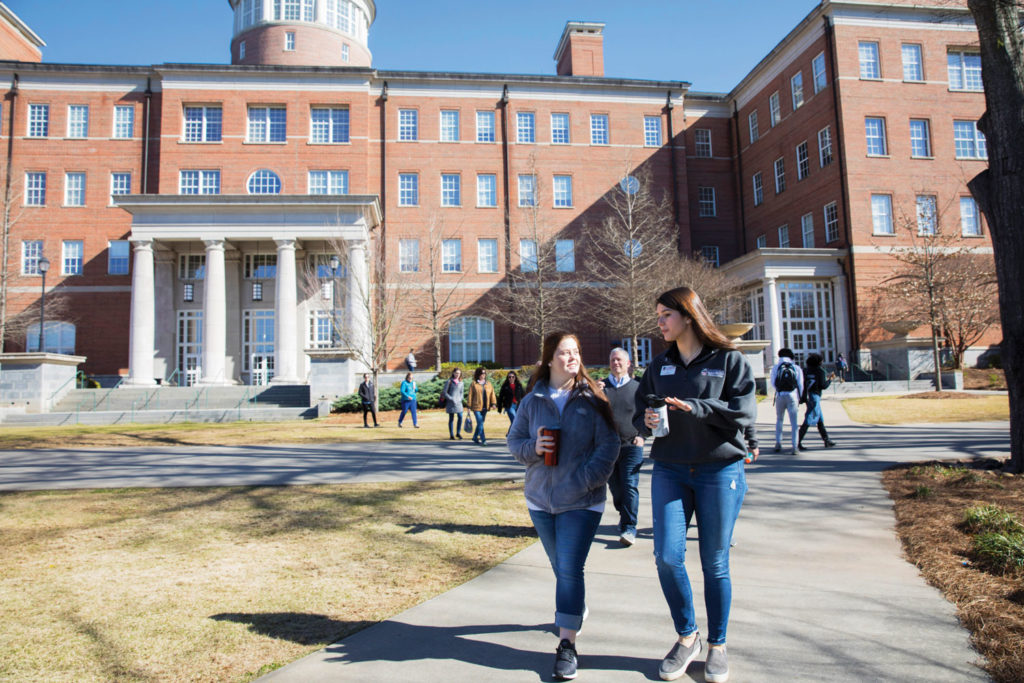 SK chats with a prospective student outside of the Miller Learning Center on a campus tour. (Photo by Dorothy Kozlowski/UGA)

“Our high rankings have catapulted us onto the radar of academically qualified students. Nationally, students are seeing Georgia as a viable academic option when it was previously a more regional grasp,” Sale says. “Getting them in our communication pipeline is important because we want them getting our emails, seeing our videos, reading our stories.”

“I’m going to ask you where you are in this process, what questions you have, maybe even what you had for breakfast. I just want to get to know you,” she tells the group.

SK reflects on her own experiences with each passing building. She stops the group at the Holmes-Hunter Academic Building and talks about seeing UGA legend Charlayne Hunter-Gault ABJ ’63 deliver her namesake lecture last year. She pauses at Peabody Hall to mention her favorite religion professor, who had a major impact on her college career.

“Students are making a really big decision based on a limited amount of time spent in the place,” SK says. “The tours are important because they don’t just introduce students to what the school is about, but it’s that first—and sometimes only—taste of what it actually feels like to be here, what it’s like to see students walking to class, what the interactions look like, the feel of the UGA culture.”

Sydney, who visited more than 30 colleges on her hunt, including UGA, says her tour was the biggest factor in her decision to attend.

“The tour at UGA was about the student making this place even better. I felt like the university was going to put stock in me, and I wanted to help make it better. UGA gives me so much—connections, an amazing education—so I wanted to give my all to the university and give back to Athens.” 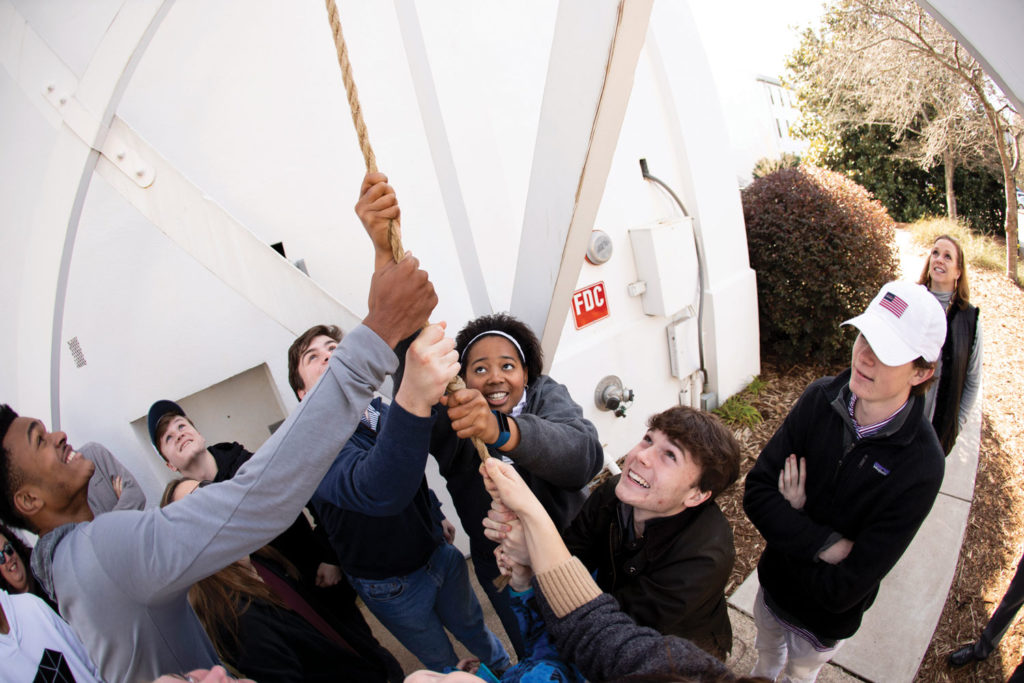