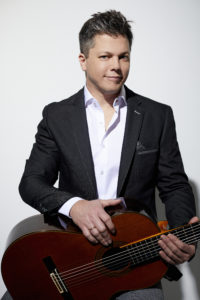 “This concert is about celebrating the guitar as a solo and as an ensemble instrument,” said Bolshoy.

Audiences will hear works for solo guitar, as well as music for guitar and string quartet, guitar and orchestra and small combos with guitar.

“The music will feature ensembles with my esteemed colleagues, with a focus on string instruments in this concert,” said Bolshoy.  “I’m excited to share the premiere of the new piece as well as the concerto and also perform well-known and loved pieces of the repertoire.”

The program will include Latin music by composers such as Agustin Barrios from Paraguay, who composed a solo guitar piece, as well as some bossa-nova and Brazilian rhythms for guitar and bass.

Also included in the program is a quintet for a guitar and string quartet by Italian composer Mario Castelnuovo Tedesco. His music inspired John Williams and many other Hollywood composers so much that a recent movie titled The Maestro was written about his life. Also featured will be two pieces by Russian composer Efrem Podgaits: a guitar concerto for guitar and orchestra, and a duo for violin and guitar written especially for Ambartsumian and Bolshoy.

“The concert is unique in its variety of music from various parts of the world, and in the fact that some of the music was written especially for the performers you’re going to hear,” said Bolshoy.

Tickets for the concert are $20 for adults and $3 for students and are available at pac.uga.edu. Streaming will be available for this concert at music.uga.edu/live-streaming. For all up-to-date concert information, visit ugamusiccalendar.com.