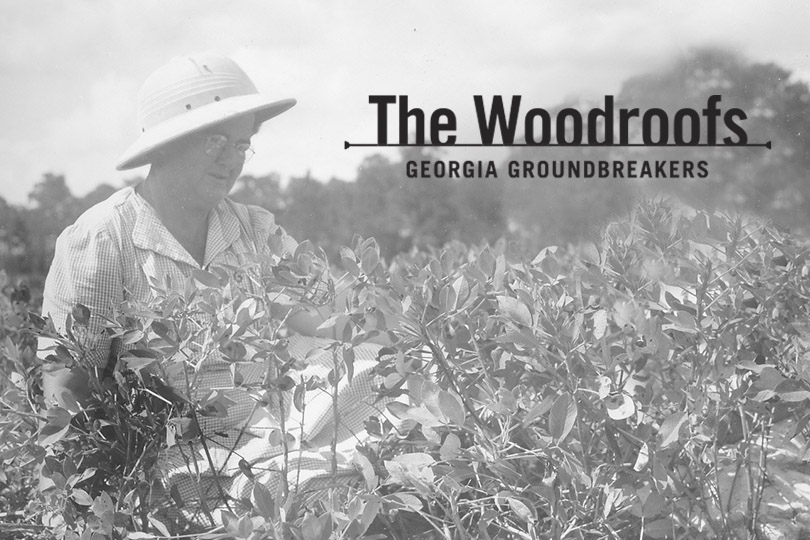 Naomi Woodroof inspects mature plants of a hybrid peanut to see how a pesticide worked on leafspot. It was taken on Aug. 16, 1943.

As the story goes, the first time University of Georgia horticulturist Jasper “Guy” Woodroof saw his future wife Naomi Chapman in 1924, she was strolling among the rows of plants at the Georgia Experiment Station in Griffin, writing notes on leaves and walking around barefoot. That caught his attention. 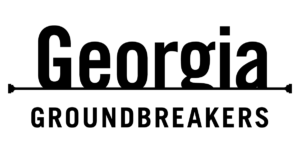 The two began researching pecans together, specifically looking at the best ways to reduce diseases and blights that hindered the crop. They published several papers about pecan root growth and development. Within two years of working together, they married.

During substantive careers and a marriage of more than 60 years, they developed methods still used today to grow, harvest and store crops. Also pioneers in their own right, they led major food science and plant pathology projects at UGA, faced Depression-era economic difficulties, and later traveled to underdeveloped countries around the world to teach others how to process and preserve food.

Expanding the bounds of plant pathology

Chapman’s grit started early on her parents’ sheep and cattle ranch in Idaho — she rowed the Snake River twice each day to attend school in Asotin, Washington. Then she pursued an animal husbandry degree at the University of Idaho. When she didn’t find any job opportunities for women after graduation, she continued her dogged quest and earned a master’s in plant pathology in 1924. Still struggling to find an open position that would accept her, Chapman took out a bank loan to embark on the long five-day train ride south from Spokane, Washington, to Griffin, where the Georgia Experiment Station took a leap by hiring her as an assistant biologist. Her first assignment with Dr. B.B. Higgins focused on the root disease of cotton seedlings, and she found the problem — and a solution.

“It speaks to a strength that came from her upbringing, energy and commitment to succeed.

For women back then, the barriers were insurmountable, and she surmounted them all,” said Gerald Arkin, assistant dean of the UGA Griffin campus from 1987-2014. “Talk about a trailblazer coming all the way south to get a job in an area where women weren’t often hired.” 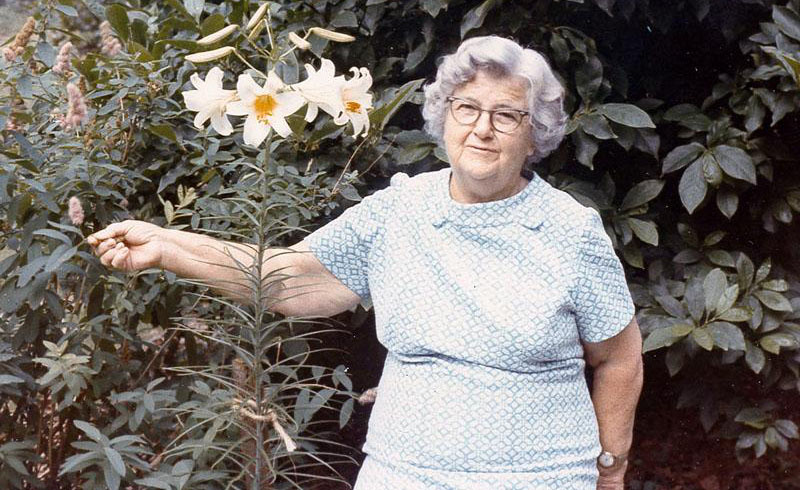 Then assigned to work on a pecan project, Naomi soon met Guy, and their partnership blossomed into several joint publications and courtship. After the Woodroofs married, Naomi raised their three children — Cade, Jane and Jasper — and turned down a doctoral fellowship from the Shaw Botanical Gardens in St. Louis, Missouri, to support her husband as he pursued his doctoral degree at Michigan State.

When he was named the first president of Abraham Baldwin Agricultural College in 1933, they moved to Tifton, where UGA’s Dr. Higgins rehired her, and she published definitive research around peanut leaf spot disease. During her revolutionary years at the Coastal Plain Experiment Station, Naomi founded UGA’s plant pathology department, developed new peanut varieties and disease control methods that led to a five-fold increase in peanut yields and played an important role in transitioning peanuts from hog feed to a crop for human consumption, which transformed the peanut industry across Georgia and throughout the nation. 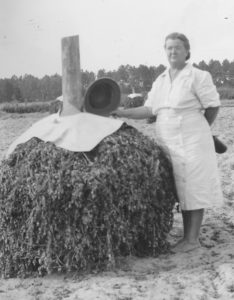 Naomi Woodroof stands next to a stack of runner peanuts from same row length and same seeding rates as part of her research in Tifton in September 1948.

“She knew peanuts like the back of her hand,” said Frank McGill, a peanut specialist who worked at the Coastal Plain Experiment Station. “She walked barefoot in her plots, even when there were no chemicals then to control the sandspurs. In the summer, she enjoyed the freedom of walking down her rows, making notes, and talking about the research with the farmers. Nobody ever saw her get spurs in her feet.”

Although an “unsung hero” during her time, Naomi has been recognized in recent decades for her contribution to Georgia’s agricultural prowess, particularly with peanuts. She was the first woman inducted into the Georgia Agricultural Hall of Fame in 1997 and is on the Honor Roll of Distinguished Georgians. On the Griffin campus today, the pavilion that showcased Georgia’s agricultural products during the 1996 Olympics in Atlanta remains standing as the Naomi Chapman Woodroof Agricultural Pavilion.

“Every semester, we have a bricklaying ceremony for students who graduate to place bricks with their names around the floor in the pavilion,” said David Buntin, interim assistant provost and campus director in Griffin. “Although we’ve done some renovations to it during the last 20 years, we hope it’ll be here for a long time to come.” 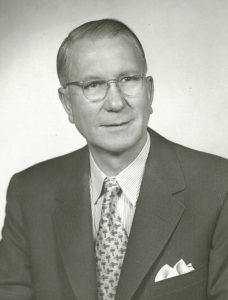 Considered the “father of food science,” Jasper “Guy” Woodroof’s interests led to UGA’s programs in food science, food safety and food technology, and his seminal research contributed to monumental developments in the quality, safety and nutritional caliber of frozen foods. During World War II, he advised on the ways to develop and improve food rations for soldiers, which likely stemmed from his brief stint in the military before he became a researcher.

Born in Meriwether County on May 23, 1900, Woodroof intended to study agriculture at UGA before returning to the family farm. Before he could make much headway into the program, however, Woodroof and fellow students were inducted into the Army in 1918.

World War I didn’t keep him away for long. Once Woodroof was discharged at the end of the war, he reenrolled at UGA in 1919 and graduated with a bachelor’s degree in horticulture three years later. He stepped into his first job as a horticulturist at the Georgia Experiment Station in Griffin, where he met Naomi and continued graduate studies in horticulture. He earned a master’s degree from UGA in 1926 and a doctoral degree at Michigan State University in 1932, when he returned to Georgia for the rest of his career until his retirement in 1967.

“Processing, engineering, nutrition and the microbiology of food — he was involved in all of these subdisciplines,” said Larry Beuchat, a distinguished research professor emeritus on the Griffin campus who worked at the Center for Food Safety. “UGA’s programs have been elevated, in large part, by his contributions in the mid-20th century.” 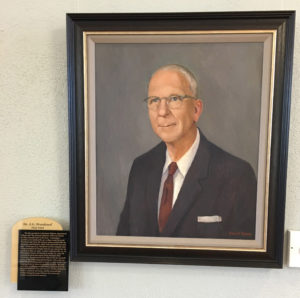 “The principal objective will be to educate the boys and girls back to the farm,” Woodroof said at the time. Even then, when asked whether the new college would be co-ed, he said, “farm life without women would offer no attraction, and therefore ABAC will enroll both boys and girls.” Stamped onto a plaque that now hangs next to his portrait in ABAC’s Tift Hall administration building, Woodroof’s words echo an important sentiment even today.

“Guy always said he married above himself, and the truth is, Naomi raised the kids and helped him analyze data, craft manuscripts and prepare presentations,” Arkin said. “For all of the great accomplishments that Guy was awarded, they shared in those recognitions. It was a remarkable partnership.”

After a year as ABAC president, Woodroof missed field research and stepped down from his position in 1934. He returned to the Georgia Experiment Station and organized UGA’s Department of Food Technology in 1938. He also directed food preservation research, which ultimately led to the university’s Division of Food Science, and worked closely with Clarence Birdseye of Birds Eye Frosted Foods on a flash-freezing method still used today. During his time as the first Food Science chair, Woodroof penned hundreds of bulletins and reports about food science, including several books, about processing peanuts, tree nuts and coconuts. 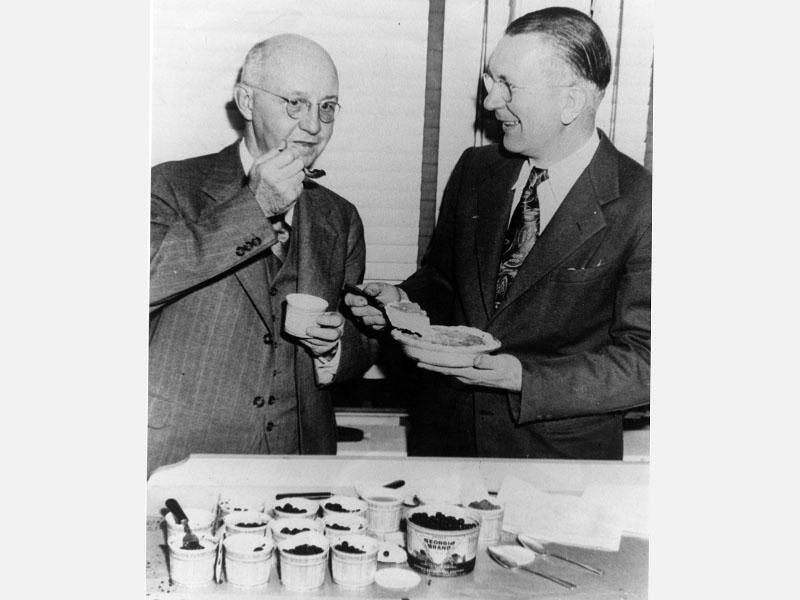 Also a horticulturist with the U.S. Resettlement Administration, which was established in 1935 under the New Deal, Woodroof aided Georgians who had lost their jobs and homes. Families were resettled on projects that allowed them to grow food for subsistence and earn income. Woodroof spent weeks on the road, traveling to projects around the South to help them get started. He was part of the team that created a mountain station in Blairsville for canning and preserving foods.

“During the Depression, farming communities suffered, but north Georgia was in dire straits, and he’d wind his Model T up the steep switchback roads to get there,” Arkin said. “It speaks to his deep compassion.”

Continuing the legacy of agriculture 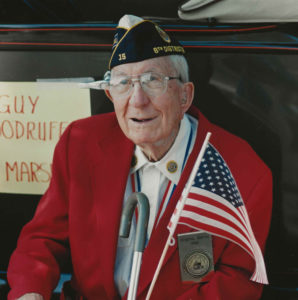 According to his grandson, this photo was taken during the Memorial Day parade in 1986, the year he was General Griffin. He really enjoyed ceremonies and protocol. The hat was his VFW hat, and he was proud of his involvement in veteran affairs. (Submitted photo)

Naomi died in 1989, and Guy died in 1998, yet their work lives on, both through today’s research that builds on their early efforts and the processing methods of fruits, vegetables and nuts that remain largely the same today. Their developments played into Georgia’s strong agribusiness tradition, and their work feeds into UGA’s current research on food safety, pests and urban agriculture.

Georgia’s agriculture community has responded in turn. The 400-acre J.G. Woodroof Farm at ABAC includes land for cotton, soybeans, peanuts and corn, as well as turfgrass plots for teaching and research. Each year, their work is memorialized during UGA’s Dr. J.G. Woodroof Lecture.

“One year, I took him to Athens for the Woodroof lecture, and he saw a plant in the foyer that he liked. He got out his pocketknife and stuck a clipping in his jacket pocket to bring home. He always had a way with plants,” said Guy Woodroof III, one of 11 grandchildren. He now lives in the Griffin home the Woodroofs bought in 1946.

“They were ‘Grandma and Grandpa’ to me, but I remember them talking about their international trips and the big differences between those who ‘have’ and ‘have not,’” he said. “They saw how far behind other countries were with food processing, development and storage, and they helped them make do with what little they had.” 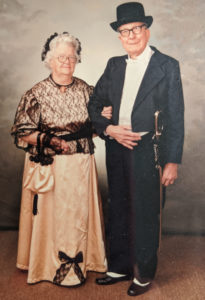 The Woodroofs on their induction as Mr. & Mrs. General Griffin in 1986. (Submitted photo)

Once they retired in 1967, the Woodroofs began extensive travel to other countries, where they advised on increasing yield, controlling disease, processing, packaging, storing and shipping of foods. When China first opened its doors to Western tourists in the 1970s, the couple visited the country as part of the People-to-People program. Naomi gave lectures about peanuts along the tour, which were well-received.

In Argentina, the couple worked with farmers to determine the best ways to ship pears, and in Russia, they worked with agriculture groups to transport leafy green vegetables by truck and train.

“Oftentimes, these groups would grow the most beautiful vegetables and special fruits, but they didn’t know how to get them to the market,” said the Woodroofs’ daughter Cade Smith, who now lives in Cullman, Alabama.

Despite the ongoing travel and work, the couple placed an emphasis on balance and leisure time, too. They’d often garden after supper and participate in civic groups around Griffin, including the Kiwanis Club and the American Legion. Sundays were reserved for the First Baptist Church of Griffin, where Guy served as a deacon.

“For 30 years, Mama took a bouquet of flowers to church every Sunday morning,” Smith said. “Even if it was nothing but berries or seed pods, she always had flowers 12 months of the year. My parents knew what to grow and when to grow it, and they wanted to share it.”