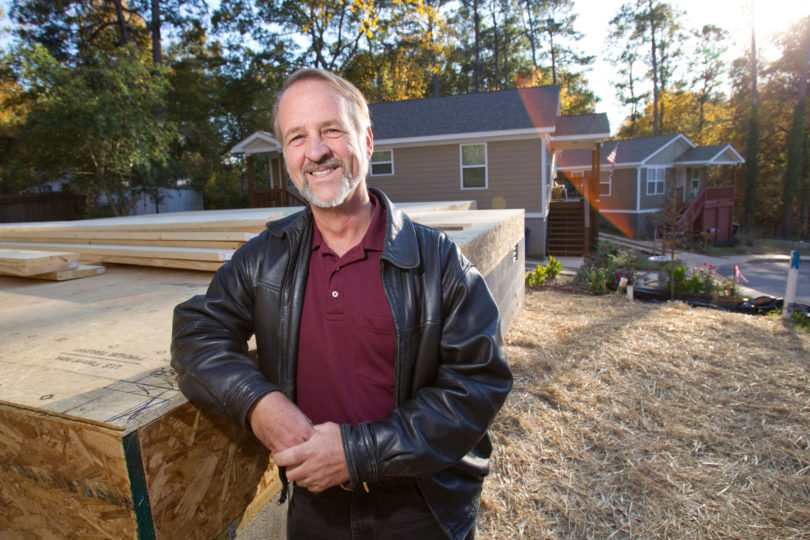 Tom Lawrence, a senior public service associate in biological and agricultural engineering and the Faculty of Engineering, thinks building houses is fun—but more than that he does it to make a difference.

Lawrence has been involved with Habitat for Humanity for more than 20 years and has had a hand in building more than 15 houses. He initially got involved in the early ’90s, helping a chapter in the Louisville, Ky., area build its first house.

“I saw the model that Habitat has set up and how you’re actually helping people, not just giving them things,” Lawrence said. “I thought it was a good thing to get involved in.”

When he moved to Athens in 2004, one of the first things he did was look up the local Habitat chapter, and he was on the board by the summer.

“It’s something I really believe in. I feel very, very strongly about the organization and how it operates,” he said. “Because it is a hand up, not a hand out.”

Habitat for Humanity is one of the organizations supported by UGA’s annual Campaign for Charities, which runs through Dec. 16.

It’s the one charity Lawrence immerses himself in because he likes to see the difference it makes in people’s lives.

Habitat for Humanity allows families below the poverty line to move toward home ownership. Through sweat equity, needy individuals and families can work to qualify for homes at cost.

Lawrence cites the example of a local roofer who got injured on the job, wasn’t able to work, lost his house and ended up in a homeless shelter. Habitat for Humanity put the roofer to work, and now he’s working toward owning his own home again.

“It’s a way of helping people change and improve their lives,” he said.

At UGA he teaches courses such as green building design, HVAC systems and heat transfer, and he uses his expertise to make sure the Habitat houses are energy efficient and as low cost as possible for the homeowner. He involves his students with service-learning projects and site visits whenever possible.

Because of the economic downturn, Habitat for Humanity has had house sponsorships and individual donations also down. Habitat has gone from building five to eight houses a year to “considering themselves lucky” to build two houses a year. But they continue to build, and have just started a new house that is sponsored by UGA’s Sigma Chi fraternity.

“The money we receive from the UGA Campaign provides a steady base of income for this organization,” Lawrence said.