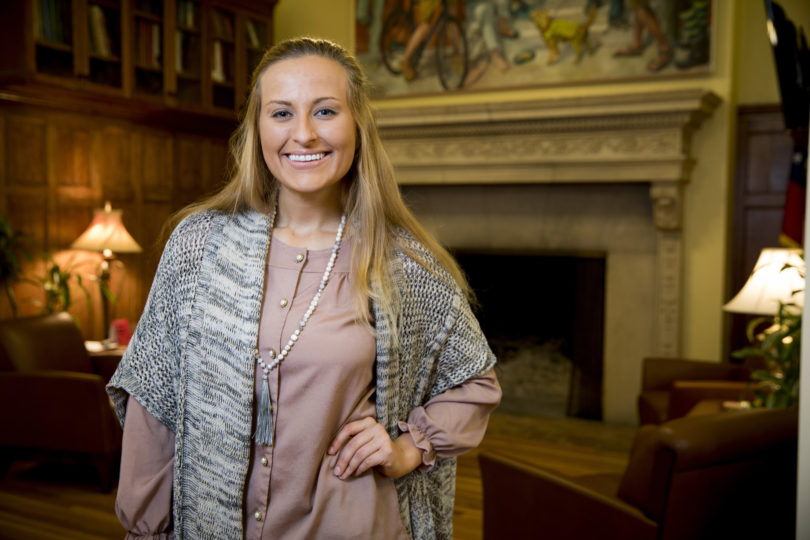 Hailey Clark wants to spend her career “disentangling the web of our health care system in order to improve efficiency and ultimately patient outcomes.” (Photo by Chad Osburn/UGA)

Hailey Clark quickly became involved in student organizations after coming to UGA, and the skills learned through those groups — along with a handful of honors and scholarships — have paved a path for her future in health economics.

Three generations of my family have been loyal Dawgs! My grandfather and great-uncle attended in the 1950s. My dad was here in the ’70s, followed by my mom, uncle and aunt in the ’80s. Now, I am about to finish up my time here, while my brother, Harrison, is starting out his journey as a freshman.

B.S. in biochemistry and molecular biology, A.B. in economics

Certificate in Personal and Organizational Leadership

My time at UGA has been fulfilling because of the variety of experiences afforded to me.

Freshman year, I joined two organizations that have undoubtedly shaped who I am as an individual and as a leader. I rushed, not knowing how I would fit into Greek life, and became a member of Zeta Tau Alpha. Over the past few years, I have found my place in leadership roles, particularly serving two terms as treasurer. The professional lessons learned from running the business side of a sorority, from payroll to budgeting, are invaluable. However, I have grown to appreciate the relationships formed with my sorority sisters and advisors even more. Our entire advisory board is tremendous, but Kery Webb and Stephanie Powell have been pivotal mentors for me, showing what it means to be invested in something much larger than yourself.

Additionally, I become a justice in University Judiciary. I now serve as director of case administration for justices, coordinating with other justices to ensure that our formal hearings abide by the Code of Conduct. I was initially drawn to the organization for the standards that it sets for the students at our university. Through an intensive academic class on ethical community leadership and serving on hearings over the years, I have grown to better appreciate the immense responsibility entrusted to us by our campus community. My discernment has been enhanced by working through the nuances of our Code of Conduct and, when a violation has occurred, by developing sanctions that balance accountability with students’ personal development.

I cannot understate the value of the various undergraduate research opportunities that I have participated in. I was a Roosevelt Scholar (now an Honors Policy Scholar) and was immersed in the world of public policy. My work throughout the semester resulted in a policy proposal to address teenage pregnancy in Athens-Clarke County. I followed that up with a research fellowship at the Carl Vinson Institute of Government. I worked in the survey research unit and quickly discovered the intricacies of survey methods. Additionally, I completed my senior thesis in biochemistry by working on a project about the effects of faculty members’ perceptions of students on their teaching. Now, I am focused on completing my senior thesis in economics.

I have also been tremendously influenced by my involvement in the Institute for Leadership Advancement as a Leonard Leadership Scholar. The two-year scholar’s program provided me with insights into leadership in both an academic setting and in practice and challenged me to become my own version of a values-based, servant leader. For one year, I served as a project manager for the program’s capstone project. My team worked with Camp Horizon, an Atlanta-based nonprofit for children in the foster care system. The ups and downs in the journey of leading 13 of my high-achieving classmates to serve a remote client taught me who I want to be as both a leader and a follower.

… it was the school that would best set me up for my future goals. I knew coming into undergrad that I was going to go to graduate or professional school, which influenced my approach to choosing a school. Attending UGA meant that I would be able to spend a few years close to home, attend college without a financial burden, and receive generous credit for my high school coursework so that I could explore more of my interests while here. These three factors sold me on the fact that UGA would be a great foundation for my higher education.

… working out at Ramsey and walking to and from class. I purposely build in time between activities so that I can walk. You get to appreciate the beauty of Georgia (even in August) and clear your mind as you try to traverse our hilly campus.

… to read and try to do creative things that require little skill. I had been really into coloring books, but I have recently started doing paint by numbers.

… rolled the dice on my summer internship. This time last year, I was searching for an opportunity in health economics. There were very few internships or research positions that I both felt qualified for and thought were a good fit. The one that I did find was a research fellowship at the University of Southern California’s Schaeffer Center for Health Policy and Economics. So, I went for it, only applied to that one position, and told no one, except for my two professors who wrote recommendation letters. A month or so later, I was so thrilled to be selected for the program (which ended up solidifying my life plans)! But, I was then left with about a month to explain to everyone that I was moving to Los Angeles for 10 weeks and then actually figure out the logistics of moving cross country. I don’t think it really hit me that I had gone out on a limb until I went to orientation and discovered I was the only non-West Coast student. I was being asked what my connections to Los Angeles or USC were, and all I could say is that I really love health econ.

… my basement. I do best my studying when I’m alone, so most locations on campus aren’t amenable to this. However, I have been known to hole up in a large closet/storage space in the Lemons lab for hours at a time when I’m needing to tune out the world.

I have had too many rich academic experiences to only select one professor!

Dr. Paula Lemons has served as my biochemistry research advisor for two and half years. Her expertise is in discipline-based education research, and anyone can see how deeply she believes in what she studies. Working in her lab has exposed me to an entirely different realm of research than I thought possible as a biochemistry major. She has expanded my understanding of both learning and teaching and made me a better researcher. There is absolutely no way that I could have tackled my senior thesis without her support!

The entire group of instructors for ILA are fabulous, but I became closest to Dr. Jodi Barnes. She served as my advisor while serving as the capstone project manager. Our weekly meetings were critical to my success in that position. But, she was also invested in my personal success. My discussions with her helped me see how I can take my personal strengths into any role and make it my own.

… Queen Elizabeth. For the greater part the last century, she has played a significant role in a world that has been transformed politically, economically and socially. Yet, she was placed in such a position not by choice. I would love to hear her insights in balancing service to others and remaining true to one’s self.

… give a bear hug to a panda bear. I have looked up whether its possible and found that you can hang out or take a photo with a panda. Yet, pandas can apparently become aggressive if provoked. If it was guaranteed to be safe, I would be the first in line to hug one!

… restore a historic house in Charleston, South Carolina, and work as a genealogist. History, specifically early American history, was the first subject that really captured my interest as a child. So, when I walk through the cobblestone streets of Charleston, it’s my childhood fantasies coming to life. I would love to devote a few years to meticulously researching everything from paint to fabrics and bringing a house back to its original grandeur. At the same time, I have a deep love of family history that developed while I was in elementary school. Working to construct a family tree is an effort that is so rewarding. I want to share that journey with others!

My passion is creating order out of disorder. It is then through order that you are able to ultimately help others. I was the type of child that when given a container of crayons, needed to sort them by color or size or brand. Coming into college, I wanted to be an OB/GYN. Being a physician, I would have been able to take all of the disorder of signs and symptoms to create a diagnosis and treatment plan. However, I have slowly realized that I am called to be a health economist. There is no doubt that our current health care system is in a state of disorder. I love to sift through data and make sense of different perspectives and opinions, and this fits perfectly into the needs of a health economist. I want to spend my career disentangling the web of our health care system in order to improve efficiency and ultimately patient outcomes.

… spend a year or two in the workforce. For the entirety of my life, I have defined myself within the confines of academia, whether it be a grade or a percentile. I am excited to spend some time learning who I am without those types of evaluations and to put into practice all of the personal leadership skills that I have developed at UGA. I then plan to return to school and complete my Ph.D. specializing in health economics.

… anxiously waiting on the sidelines of the Rose Bowl. The entire Rose Bowl trip was amazing. I had been gunning for us to go since the start of the season, so that I had an excuse to get back to LA. But, everything culminated in the few minutes of overtime on New Year’s Day. I had a pass to get on the field as soon as the game ended. However, the entire game had been an emotional rollercoaster, so I didn’t even know if I was going to get to use it. As soon as we figure out that we were going into overtime, we headed down to the waiting area on the sidelines. I vividly remember standing there through both overtimes with no idea what the next few minutes would hold. It was surreal when Oklahoma’s kick was blocked, and before I knew it, I was standing on the field with confetti falling down. Those moments seeing the pure joy on everyone’s faces and the loyalty of Bulldawg Nation will forever stay in my heart.