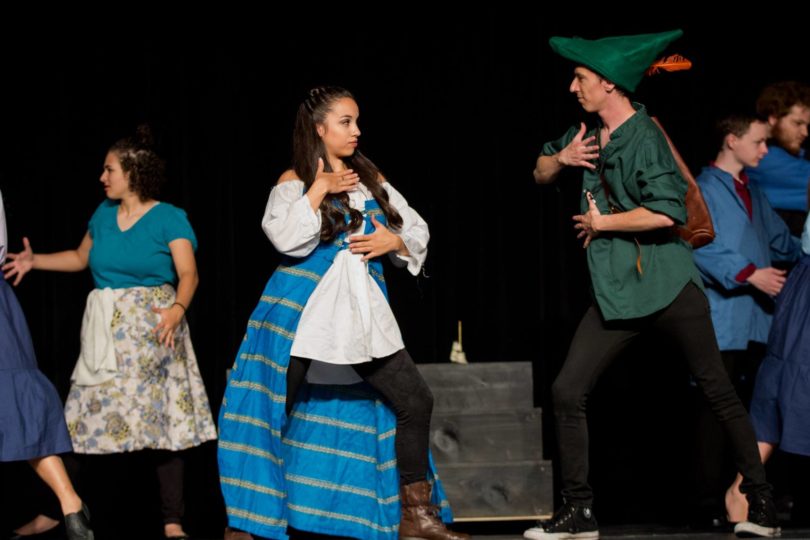 UGA alumni and students address a community need. Their next show opens this week.

Have you ever watched a movie with subtitles and gotten frustrated by reading lines of dialogue at the bottom of the screen while you’re missing the action above the text? This is somewhat akin to how a deaf person has to watch a live show with a sign language interpreter. Constantly looking off to the side while the drama takes place on stage can ruin the immersive quality of theater.

Two University of Georgia alumni sought to remedy that problem when they founded a theater in Athens called Hands In!, an educational nonprofit that produces original works in American Sign Language (ASL) with a special interest in theater and jukebox musicals.

Here’s how a Hands In! production works: Both Deaf and hearing actors perform, but everyone signs their lines (a capital “D” signifies deaf culture as a whole, rather than the clinical term “deaf”). Voicers offstage speak the lines as they are being signed, so the hearing audience can understand what’s happening as well. 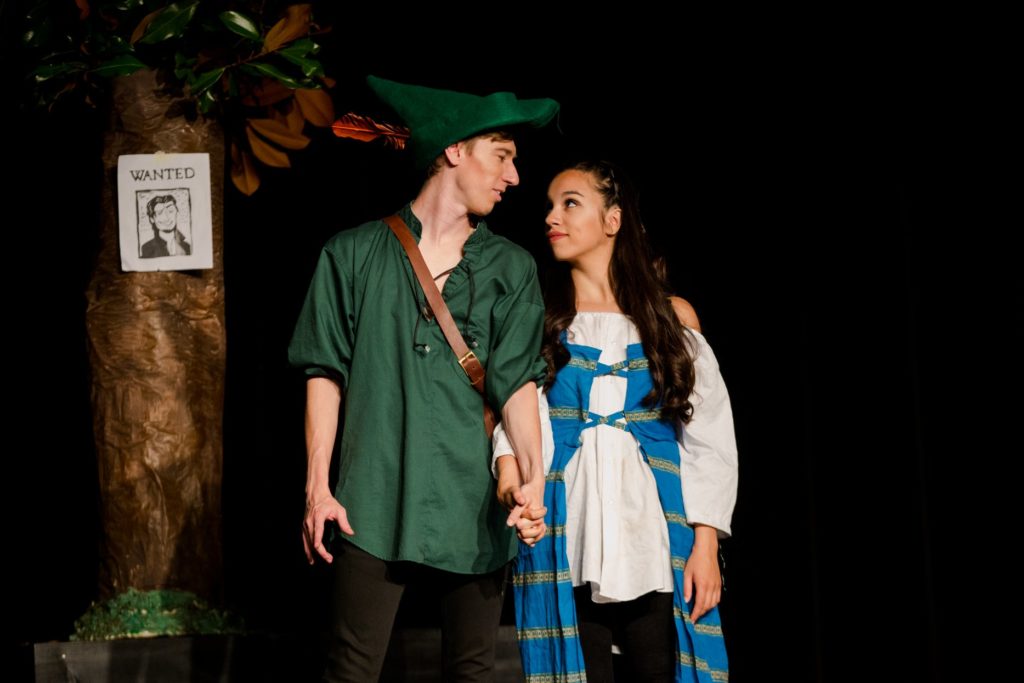 Christopher Carpenter and Jordan Richey are both hearing members of the Hands In! cast.

Hands In! isn’t a new idea. The first Deaf theater company, National Theater for the Deaf, was founded in London in 1967 and others exist around the world, but they are not yet on the radar of most theatergoers and Hands In! is the only theater of its kind in Athens.

Haley Beach was earning her degree in communication sciences and disorders at UGA when she and UGA alumna Amara Ede co-founded the theater company in March 2018. Beach graduated from UGA in May 2019 and is currently pursuing certification to become a sign language interpreter.

In 2017, Beach and Ede put on their first show, which they wrote and directed, at UGA’s Baptist Collegiate Ministries. When the ministries shut down for renovations, Beach and Ede lost the use of their stage. Despite having no budget, they decided to start their own theater company because they had recognized a need that wasn’t being met.

Beach isn’t deaf, but she got interested in ASL when she interpreted for a dinner theater performance of “The Little Mermaid” at the Baptist Collegiate Ministries. “A woman there suggested I be a counselor at Deaf camp. I fell backwards into it really and just fell in love with the language and the culture and the people. I feel privileged to be a part of their community. I took four ASL classes at UGA and joined ASL Dawgs.”

Luke Bundrum is Deaf and is the president of ASL Dawgs, an organization that helps connect UGA students with the Deaf community. He is also an actor in Hands In!’s next show, “Wanderland,” which is based on “Alice in Wonderland.” Luke has two roles: Tommy and the March Hare.

A fourth-year social studies education and history major at UGA, Bundrum helped with the early conception of Hands In! and performed in their first show, “Nottingham.” Bundrum was born deaf and got a cochlear implant at age 3. “Being Deaf is a challenge in life, but with supportive friends and community, I am able to succeed on my own,” he said. “It’s rare for a Deaf student to attend a rigorous liberal four-year college such as UGA, and I have been blessed to get this far in life.”

Most of the performers in Hands In! productions, however, are hearing, such as UGA student Jordan Richey, who got involved when Beach reached out to her about auditioning. After sending Beach videos of past performances, Richey was asked to play the lead, Maid Marian, in the theater’s reinterpretation of “Robin Hood.” She learned ASL while she learned her lines for the show. 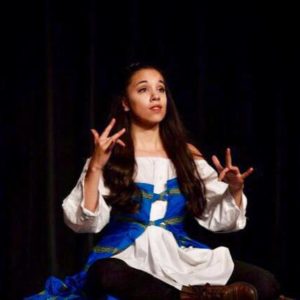 Jordan Richey didn’t know ASL when she was cast as the lead in “Nottingham.”

“I would video Haley and Amara doing the signs then I could go home and practice making the shapes,” said Richey. “It was different than how I would normally approach memorizing lines.

“It’s not word-for-word translated to English. A lot of it is context based. For example: ‘Let’s go to the car’ might be changed to be ‘Me, you, go car.’ Four signs. You use your body and face to show the urgency.” She now considers herself conversationally fluent in sign. “By the end I could carry on a conversation with the Deaf kids in the show.”

Richey grew up in Royston, Georgia, and moved to Athens in eighth grade. She began UGA in the vocal performance program at the School of Music but said it wasn’t the right fit for her because she leans toward musical theater.

She switched to the speech therapy program in the College of Education, and realized it was a perfect fit. Currently a senior at UGA, she also teaches voice lessons at Oconee Youth School of Performance.

Hands In! has an ASL consultation board comprised of Deaf members only, and they strive to incorporate Deaf actors in their shows. Their next show, “Wanderland” will play July 11, 12, 13 and 14 at UGA’s Cellar Theater.