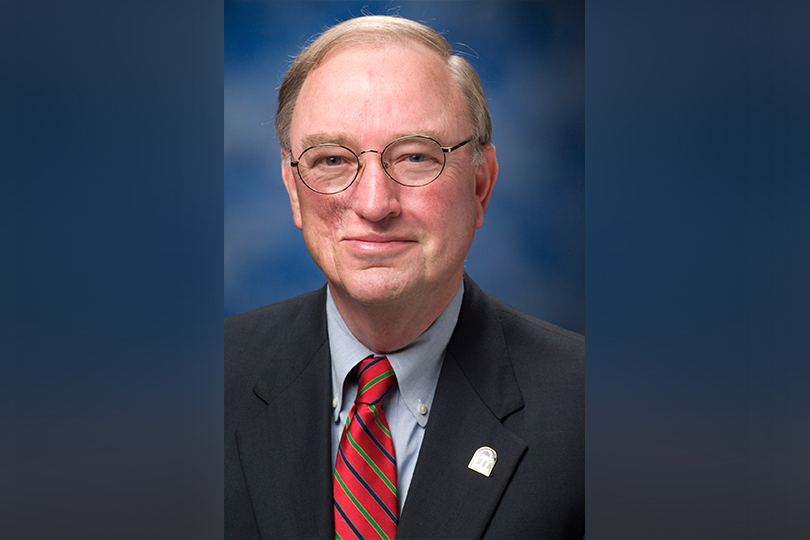 Huckaby, a life-long public servant, served the State of Georgia in numerous capacities for more than 50 years. He was named chancellor of the University System of Georgia in July 2011, just a few months after being elected as a member of the local delegation to the Georgia House of Representatives. He remained chancellor until his retirement in December 2016.

His career included several positions at the University of Georgia. He was director of the Carl Vinson Institute of Government (1997-2000), senior vice president of Finance and Administration (2000-2006) and a special assistant to the president on a part-time basis (2006-2009).

“I worked with Hank for many years at the University of Georgia and was honored to have been selected as President while he was serving as Chancellor,” recalled UGA President Jere W. Morehead. “He provided me with wise counsel on many important institutional matters and remained a close friend and advisor following his retirement. He will be missed, and the sympathies of the UGA community go out to Amy and their family.”

As Senior Vice President for Finance and Administration, Huckaby provided remarkable financial leadership, guiding the institution through challenging budgetary cycles and strengthening the institution’s financial and operating position. He oversaw the implementation of UGA’s Campus Master Plan and the creation of the UGA Real Estate Foundation. Under his watch, major facilities such as the Miller Learning Center and East Campus Village were constructed and numerous older facilities were renovated.

In addition, Huckaby played an important role in UGA’s selection by the Local Redevelopment Authority to receive the Navy Supply Corps School property from the federal government when the base closed. The former naval base now serves as UGA’s 56-acre Health Sciences Campus, housing both the College of Public Health and the Augusta University/UGA Medical Partnership.

“Words are truly inadequate to try to capture the far-reaching and indelible impact that Hank Huckaby had on UGA, our Finance and Administration team, and the greater University community,” said Ryan Nesbit, vice president for Finance and Administration. “In my last conversation with him back in late January, he told me that the accomplishment he was most proud of during his tenure at UGA was the creation of the F&A Staff Recognition Program.

“To me, that spoke volumes about Hank’s devotion and deep love for the University, and in particular, the people who serve and support UGA’s students, faculty and staff,” he said. “Hank truly embodied servant leadership, and his example challenges and inspires me—and all of us in Finance and Administration—to carry on his legacy of outstanding stewardship and service and to use our lives to be a blessing to those around us.”

An endowed fund established upon Huckaby’s retirement from UGA in 2006 continues to support the Finance and Administration Recognition Program.

Huckaby was born on Dec. 13, 1941, in Griffin and grew up in Hapeville. He earned an associate’s degree in liberal arts from Young Harris College and a bachelor’s degree in political science and an M.B.A. in international business from Georgia State University. He also pursued additional graduate studies at UGA’s School of Public and International Affairs. During the 1960s and ’70s, he taught at DeKalb College (now Georgia Perimeter College), Emory University, and lectured at UGA and Young Harris College.

Huckaby served the State of Georgia in numerous governmental capacities including executive director of the Georgia Housing and Finance Authority, commissioner of the Department of Community Affairs and, most significantly, director of the Office of Planning and Budget, the highest ranking financial position in state government.

In the Office of Planning and Budget, Huckaby first served as a senior policy coordinator from 1973-1975, and then as its director from 1991-1995 in the administration of Gov. Zell B. Miller. He later served as interim chief financial officer for Gov. Sonny Perdue during his transition period.

From 1977 to 1980, Huckaby was commissioner of the Georgia Department of Community Affairs, and from 1980 to 1991, he was the executive director of the Georgia Residential Finance Authority. Huckaby was elected to serve as president of both of their respective national organizations.

Huckaby was elected to the Georgia House of Representatives, District 113, in 2010 and served on the Appropriations Committee, Children and Youth Committee and Higher Education Committee. He was inducted into the National Academy of Public Administration in November 2014.