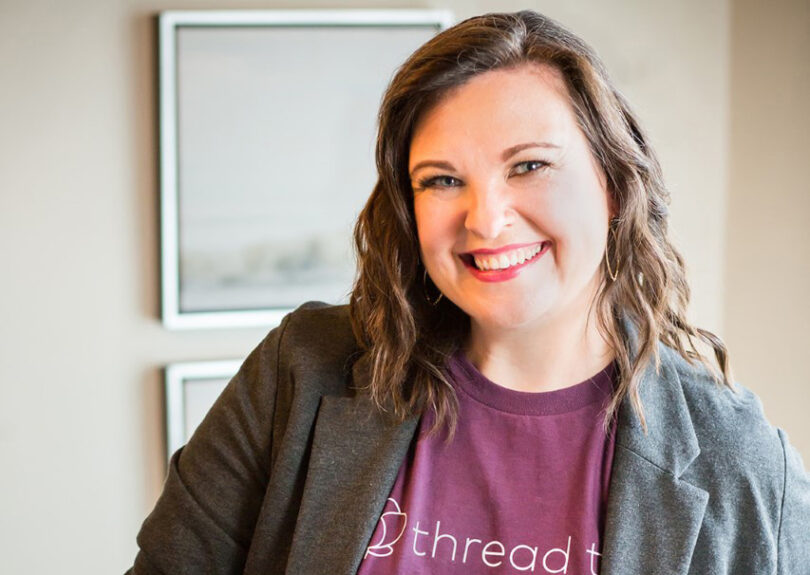 In 2017, Hannah Kay Herdlinger started Thread Talk, a social enterprise based in Charlotte, North Carolina, that sells blankets and donates a portion of its proceeds to funding critical wish-list items for domestic abuse shelters nationwide.

After nearly a decade pursuing her career in Washington, D.C., Hannah Kay Herdlinger AB ’04 married her college boyfriend and moved back to Georgia. Then the abuse started. Following an injury that nearly killed her, Herdlinger left her husband and started her new life as a survivor.

“I was very fortunate to have the support of friends and family and resources to help me move forward when I decided to leave my husband,” she says today. “I realized that there are so many people who do not have that support, and the domestic violence shelters provide the safety, security, and comfort to help survivors get back on their feet.”

More than one in three women and one in four men will experience domestic abuse in their lifetime. Fortunately, there are people like Herdlinger helping survivors get back on their feet.

Herdlinger had always valued a sense of purpose; however the path to finding her own wasn’t always so clear. Once she graduated from UGA with her bachelor’s in speech communications, Herdlinger went on to work on Capitol Hill for six years. She then moved to Facebook.

Herdlinger soon connected with Sheryl Sandberg, the company’s chief operating officer. Sandberg asked her to come on as the head of operations of Lean In, her nonprofit that aims to empower women and fight for gender equality.

Inspired by the stories shared by Lean In and the women associated with the organization, Herdlinger began telling her own story.

“Working at Lean In helped me to understand the power of sharing stories and gave me the tools to help build resilience,” she says. “Telling my own story has helped me heal while also connecting with others with shared experiences.”

Herdlinger also travels across the country and speaks to groups about overcoming domestic abuse as well as what it takes to push yourself to succeed.

“What I speak about is a range from telling my story and how I started talking about being a domestic violence survivor but more importantly how I’ve found my passion and purpose in life,” she says.

Of all of the lessons that she shares with her audience, Herdlinger believes that the power of conquering struggles and finding one’s purpose is the most important.

“I talk to people, let them realize that it’s okay to be authentic, and it’s okay to have these conversations,” she says. “People said my life looked perfect on the outside, but behind closed doors nobody knew what was going on. Having this conversation and connecting to people who may be going through the same thing or something similar, we can connect on a different level.”