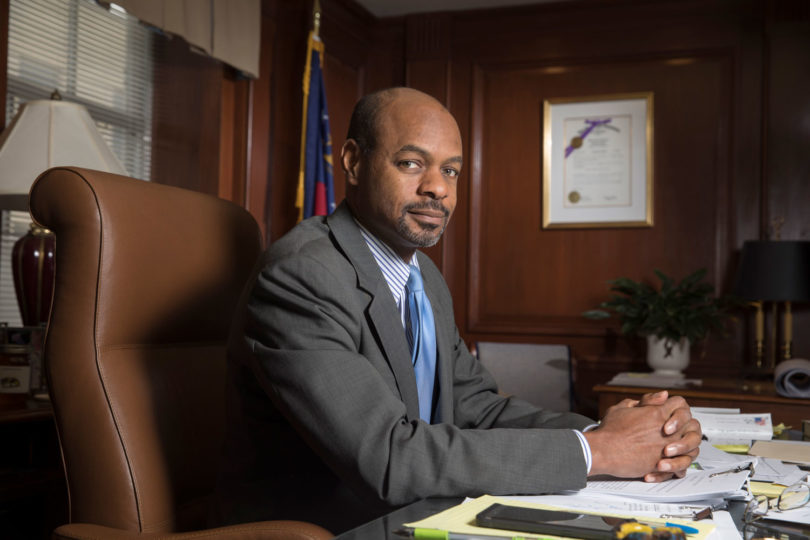 In 2018, Harold Melton JD '91 was unanimously selected as Chief Justice of the Georgia Supreme Court. (Photo by Peter Frey/UGA)

Walking into the office of the Supreme Court of Georgia’s chief justice, with its wood-paneled walls and marble nameplate, you feel a sense of awe and perhaps a bit out-of-place in your blue jeans.

Then you see Shaggy, Velma, and Scooby-Doo as the background of the chief justice’s computer, and you know he doesn’t take himself too seriously. His sense of humor comes across when he talks about his journey to the state’s highest court of law.

“The University of Georgia did prepare me well,” says Chief Justice Harold Melton JD ’91. “I joke that I was in the top of the middle of the class, but I really do feel like they prepared me on the knowledge of the law and the exposure to the culture of the legal community, which is just as important.”

After graduating from the School of Law, Melton spent more than a decade in the attorney general’s office, where he started off in property tax law. At the time, Georgia was reassessing property values.

“We were going across the state making sure counties updated their values, and then the local communities were howling because the values had gone up,” he says. “So I got to walk into these remote counties throughout the state and say, ‘Hi, I’m from Atlanta. I’m the guy that’s trying to make your tax base go up.’”

But the experience turned out to be a surprisingly fun way to see the state and work out solutions with constituents.

When he was selected to serve as executive counsel to Gov. Sonny Perdue DVM ’71, Melton was able to return some of his focus to one of the issues that first piqued his interest in law: criminal justice reform. Increasing incarceration rates were putting a strain on an already overcrowded prison system, and something had to be done to stem the flow of inmates.

“If we kept up with those incarceration rates, we would probably have to build one prison per year or close to it,” he says. “It just wasn’t sustainable. And we also realized that when you incarcerate somebody, that has an impact on the person, but it also has an impact on the families, the household that person came from.”

The solution: Find a way to allow some non-violent offenders to be committed to the Department of Corrections without necessarily incarcerating those individuals. Lawbreakers could be required to wear an ankle monitor, for instance, and if they violated their probation, they could quickly be moved to a hard prison bed.

Gov. Perdue appointed Melton to the state’s Supreme Court in 2005. It was a bit of an adjustment going from the high-intensity, high-energy governor’s office to the quieter halls of the judicial building, but the position quickly became one of his favorites. When his fellow justices unanimously elected him to serve as chief justice in 2018, Melton was honored.

“One of the most challenging things when you’re on this court is you want to get it right,” he says. “We have a really good court, and I really enjoy collaborating with each of the eight other justices. Most of our decisions are 9-0—I would say 95-98 percent are 9-0—because we work hard to bring everybody into the fold and address concerns that are raised by any of the other justices.”

As for the case of the Scooby-Doo backdrop, his 18-year-old daughter was found guilty.

“I took my new computer home,” Melton laughed. “Within two minutes she had Scooby on there.”