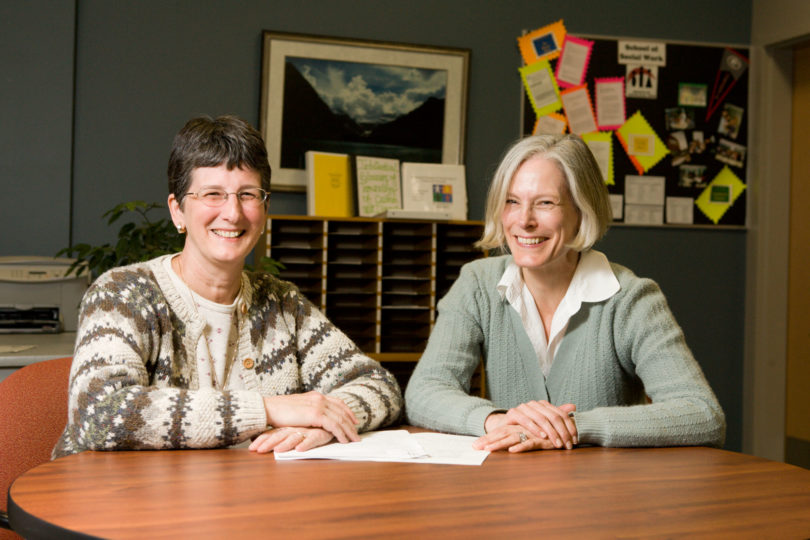 Elizabeth Vonk (left) and Rene Searles McClatchey found that children who attended weekend camps combining camp activities with therapy were less likely to have post traumatic stress disorder than other children who had lost parents after a long illness.

Post traumatic stress disorder is commonly thought to affect victims of major trauma and those who witness violence, but a new UGA study finds that it also can affect children who have lost a parent expectedly to diseases such as cancer.

The finding, scheduled to be published in the May issue of the journal Research on Social Work Practice, has major implications for helping children cope with grief, said lead author Rene Searles McClatchey.

“Often children who have lost a parent are given grief therapy, and we’ve found that grief therapy doesn’t help if you don’t take care of post traumatic stress disorder symptoms first,” said McClatchey, an adjunct professor in the UGA School of Social Work.

McClatchey is also founder and director of Camp Magik, a nonprofit organization that provides weekend camps for children that blend traditional camp activities such as canoeing and hiking with therapy for PTSD and grief. McClatchey and her colleagues studied 100 children to test the effectiveness of the camp-based intervention. They found that:
• The odds of continuing to experience severe PTSD were 4.5 times higher for children who did not attend the camp compared to those who did; and
• The odds of experiencing severe grief were 3.6 times greater for children who did not attend the camp than for those who did.

McClatchey said that in addition to showing that camp-based interventions work, the study found a link between post traumatic stress disorder and grief. She explains that a previous study she conducted in 2005 in which children attended camp and underwent grief counseling without PTSD treatment found that the children didn’t improve or, in some cases, fared worse after the camp.

“Delving into their grief without addressing their PTSD got them thinking about their loss,” McClatchey said, “but we didn’t teach them the coping mechanisms to deal with the PTSD symptoms that were stirred up.”

Few studies have examined the effectiveness of camp-based interventions and most studies on overcoming grief have focused on children who have lost family members to sudden death resulting from violence or accidents. Until now, researchers have overlooked the post traumatic stress and grief of children whose parents died expectedly after a long illness. The new study finds that both groups can benefit from PTSD treatment followed by grief counseling.

“The camp allows kids to process their grief and go on with their lives,” Vonk said. “They can attend to everyday activities in a way that they weren’t able to before and can concentrate better in school.”

McClatchey said the average cost per camper is about $250 for the three-day weekend, making it more cost effective than individual counseling, which costs an average of $100 per hour and requires multiple sessions to be effective. (Camp Magik is supported by donations so that children and their families never pay to attend.)

Another benefit of the camp setting is that it gives children around-the-clock access to counselors so that those who don’t open up during group sessions can have their needs addressed individually. The researchers add that attending such camps with other children who have experienced a loss has benefits that individual therapy can’t provide.

“They see that other kids are having the same kinds of thoughts and feelings,” Vonk said, “and that in and of itself is healing.”

The study gives statistical evidence that the campers benefit from the intervention, but numbers don’t tell the whole story.

One child hadn’t spoken for a year before going to camp but went home talking.

One young boy had refused to leave his mother’s side after the sudden heart attack of his father six months earlier. He returned home from camp insisting on sleeping in his own bed again. He went off to school without objection and resumed play dates with his friends.