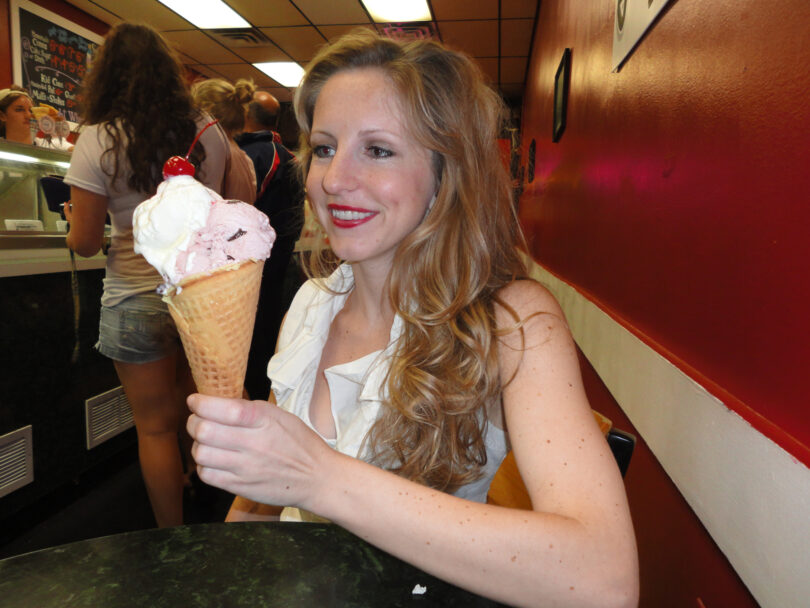 We all scream! Heather Huffman holds many titles--lobbyist, professor, doctoral candidate in economics among them. She is also CFO of her family's ice cream shop in St. Paul, Minnesota.

Heather Huffman AB ’06 has been interacting with an intriguing variety of people since she was old enough to stand behind the counter at the Grand Ole’ Creamery, her family’s ice cream shop in St. Paul, Minnesota.

For instance, in 2014, Huffman’s father, Gary, once took a call from President Barack Obama’s staff, who asked for the store to be cleared out for a visit. Believing it to be a joke, Gary ended the call with a laugh.

An hour later, the Leader of the Free World dropped by for a bowl of Black Hills Gold (caramel ice cream with Oreos and pralines). Hoffman remembers the president reminiscing about his first job, which happened to be scooping ice cream. The interaction reinforced a powerful lesson that had already shaped much of Huffman’s life: Where you start has a decisive impact on where you end up. As an economist, Huffman understands the impact someone’s first job has on their life.

“It doesn’t matter if you’re making pizza or scooping ice cream,” she says. “Being able to put a job on your resume is so important in terms of being able to move up in any career.” 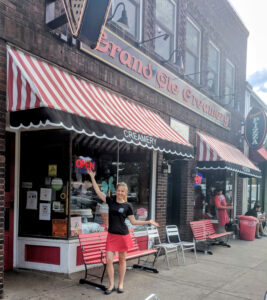 Heather Huffman’s mom opened the Grand Ole Creamery in 1984 in St. Paul, Minnesota. Huffman worked there growing up and she is now chief financial officer.

Huffman’s mother, Dawn, started the Grand Ole Creamery in 1984 because she had a craving for a chocolate malt with real banana. As a fifth-generation entrepreneur, it’s hardly surprising that Huffman, a lobbyist, professor, doctoral candidate in economics, and (since 2019) the CFO of the Grand Ole Creamery, has spent her entire professional career advocating for entrepreneurship and small business growth. She may wear many different hats professionally, but one thing she does every day is advocate for small business owners and entrepreneurs.

“Growing up in an entrepreneurial family and working in the family business is what inspired me to pursue a doctorate in economics,” she says.

Huffman was born in St. Paul but moved to Duluth, Georgia, when she was two. After graduating at the top of her high school class in 2002, Huffman was excited to see the world. She was unsure at first about attending a university close to her home, but one visit to UGA was enough to change her mind. Huffman was charmed by the campus, especially the music scene, from rocking out at live Widespread Panic shows to meeting musician Ben Harper.

“His mother and I are actually friends now,” Huffman says. “She runs a folk music store nearby. I got to see him play live in Athens as a student, and it’s crazy how things have come full circle.”

From running family restaurants to providing cosmetology services, Huffman met people who had to get creative for the sake of their families, their livelihoods, and their dreams. That experience stuck with her. Today, she advocates for small business owners and entrepreneurs, especially within the international community.

It turns out that her Spanish degree came in handy in other ways as well. She also uses what she learned to teach economics to Spanish-speaking students.

“We take for granted how many textbooks only come in English.”

For Huffman, her Athens experience continues to drive her work.