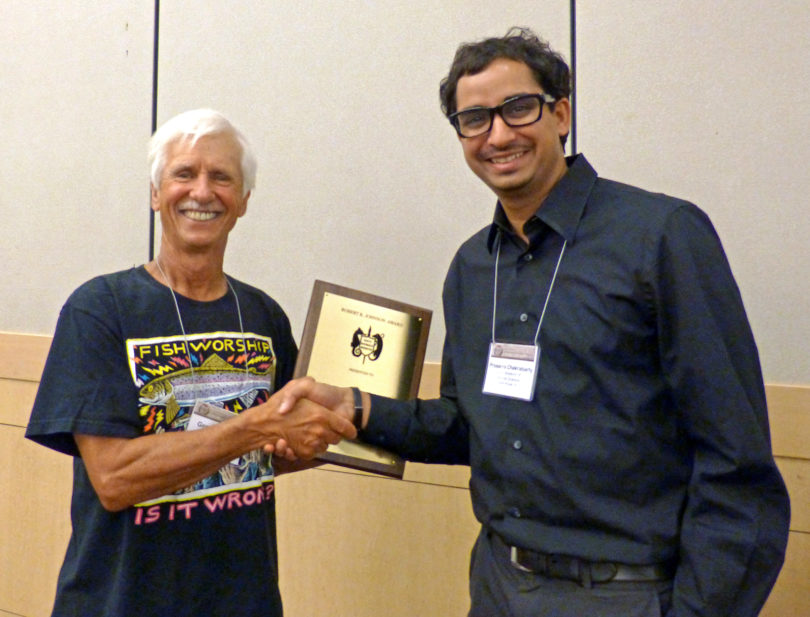 Gene Helfman receives a plaque commemorating his Meritorious Teaching Award in Ichthyology from Prosanta Chakrabarty of the American Society of Ichthyologists and Herpetologists.

Athens, Ga. – Gene Helfman, a professor emeritus in the University of Georgia Odum School of Ecology, recently received the inaugural Meritorious Teaching Award in Ichthyology from two major scientific societies for the study of fishes.

The American Society of Ichthyologists and Herpetologists is an international organization devoted to the scientific study of fishes, reptiles and amphibians; and the American Elasmobranch Society supports the scientific study of sharks, skates and rays. They presented the award at the 2014 Joint Meeting of Ichthyologists and Herpetologists in Chattanooga.

Helfman’s teaching and research career have focused on the conservation of fishes, effects of land use on fishes, invasive species and behavioral and ecological interactions and their impact on fish conservation. He is the author of many articles and books, including the textbooks “Fish Conservation” (Island Press, 2007) and “The Diversity of Fishes” (Wiley-Blackwell, 2009) with co-authors Bruce Collette, Douglas Facey, and Brian Bowen, which is now in its second edition. His most recent title is “Sharks: The Animal Answer Guide” (Johns Hopkins University Press, 2014), which was coauthored by George H. Burgess.

In announcing the award, selection committee chair Michael J. Pauers noted that Helfman’s contributions to ichthyology education include not only his textbooks, which he called “superlative resources,” but also the number and quality of his students, many of whom wrote in support of Helfman’s nomination.

“It was truly wonderful for us to see just how many people, and how deeply, you have touched with your intelligence, dedication, mentorship and wit throughout your career,” Pauers said.

Helfman retired in 2007 after a 30-year career at UGA. He has served on the National Research Council’s Klamath Basin Study Committee, the U.S. Agency for International Development’s Sustainable Fisheries Assessment Team, the Scientific and Technical Advisory Committee of American Rivers, a National Marine Fisheries Service Salmon Recovery Committee, two Fish Specialist Groups for the International Union for the Conservation of Nature and on the IUCN Red List of Threatened Species Committee.

He and his wife, Judy Meyer, a professor emerita in the Odum School, currently live on Lopez Island, Washington. He remains active in local conservation and education efforts focused on salmon, sharks and marine habitats.