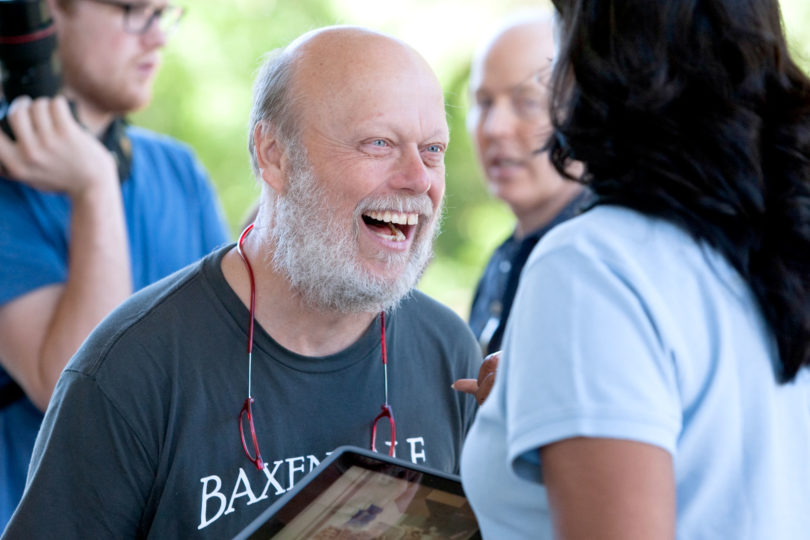 One of the best-preserved and most important archaeological sites in Georgia and the Southeast will soon be owned and managed by UGA’s Museum of Natural History and will offer insights into a chiefdom that flourished in west central Georgia some 700 years ago.

Acceptance of the gift of the Singer-Moye Indian Mound complex from the Columbus Museum in Columbus was made formal at a recent meeting of the University System of Georgia Board of Regents. The transfer is still pending final legal arrangements.

The site, featuring eight mounds, is, according to Byron J. Freeman, director of the MNH, a hidden treasure relatively unknown to the public and barely known even to the professional community.

Singer-Moye has been part of the Columbus Museum for 40 years and the site of productive research, though the vast size of the tract means much of it has never been studied.

“The largest mound, clearly the home of a very powerful Indian chief, is perhaps the fourth-largest such structure in the state behind Etowah, Ocmulgee and Kolomoki,” said Freeman, who is also a senior public service associate in UGA’s Odum School of Ecology. “It alone is larger than any mound in Florida, South Carolina or North Carolina. Its location is an odd one and raises intriguing questions of environment and prehistoric politics that demand answers. It is truly a jewel of an archaeological site.”

The site is from the Mississippian Period, which lasted from about 800 to 1500 B.C. and centered on mound-building people in what is now the Southeastern, Eastern and Midwestern U.S.

Transfer of ownership of the site from the Columbus Museum has been in the works for nearly three years.

“The museum decided to approach UGA about a transfer out of its belief that it was the regional institution best positioned both to care for it and further its development as an educational resource,” said Mike Bunn, associate curator of history at the Columbus Museum.

“The museum’s staff and trustees admit the decision was difficult one, but recognized the depth of UGA’s intellectual and financial resources presented a wonderful opportunity to make the site available in a way it has not been previously. They are confident the move is in the best long-term interest of the site and look forward to serving as a partner in UGA’s efforts to preserve and interpret it.”

The mound site was originally donated to the Columbus Museum beginning in 1968 and was assembled from several properties owned by the Sam Singer and L.M. Moye families as well as from the Georgia-Kraft Corp.

The Georgia Museum of Natural History is part of UGA’s Franklin College of Arts and Sciences.

“This is a tremendous addition to the museum that will give our faculty and students an opportunity to learn about Georgia’s prehistory for generations to come,” said Franklin Dean Garnett S. Stokes. “We couldn’t be more delighted.”

The eight known mounds, covering nearly 44 acres, are part of a larger area of Mississippian occupation. The largest mound is more than 43 feet high and has 14,000 square feet of surface area; however, earlier researchers have estimated that the size of the site including villages may well extend beyond these boundaries.

“The research questions that can be addressed at Singer-Moye are boundless,” said Freeman. “The opportunities for students at all levels are wonderful. No other academic institution in the U.S. has ownership and control of such a magnificent archaeological resource.”

Jace Weaver, director of the UGA Institute for Native American Studies, was also enthusiastic about the acquisition.

“Singer-Moye is a very significant Mississippian mound site from the pre-contact, prehistoric period that rivals in many ways Etowah and Ocmulgee, two of the most important Mississippian sites in the country,” he said. “The opportunity for INAS students to have access to Singer-Moye for educational opportunities is an exciting possibility, and beyond exploration of archaeological resources, I believe the site could be put to excellent use.”

Potential collaborators with UGA on studies at the site include Columbus State University and other nearby universities in Georgia and Alabama, as well as the Columbus Museum. Potential research interests are broad and range far beyond traditional field archaeology.

In addition to work in such areas as botany, soil ecology, microbiology and general soil science, research possibilities range from surveys for pre-Columbian soil bacteria to testing theories on whether the people who lived there adversely modified the local environment.

The approximately 100 boxes of artifacts already collected and inventoried by the Columbus Museum at the site will be reboxed and curated at the Georgia Museum of Natural History.