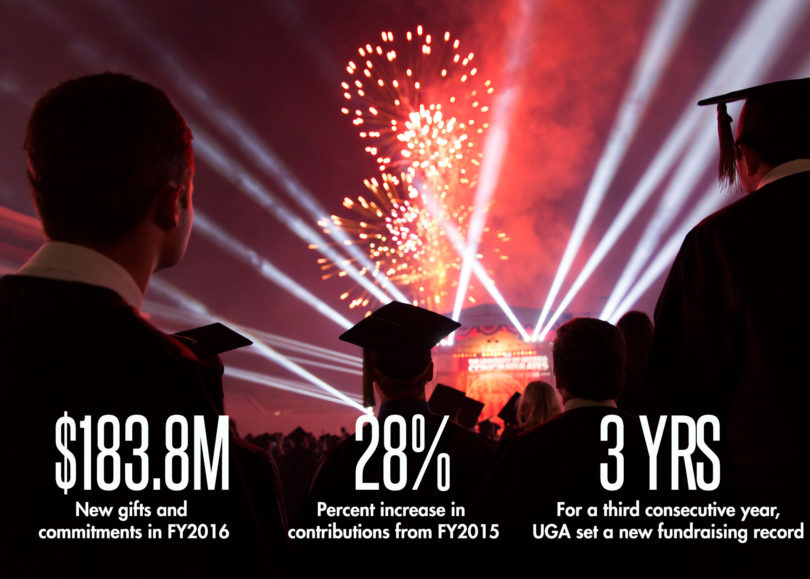 Public phase of comprehensive capital campaign to begin in November

For a third consecutive year, the University of Georgia has set a record in fundraising, bringing in $183.8 million in new gifts and commitments during fiscal year 2016.

Private funding supports the university at every level. During the 2015-16 academic year, private donations helped to fund more than 6,100 scholarships and more than a dozen endowed faculty positions. Donations to UGA continue to help the university recruit and retain outstanding faculty, enhance the student experience and expand the research enterprise.

“This major accomplishment speaks to the unyielding ­commitment of the UGA community to elevate our great university to new heights of excellence,” said President Jere W. Morehead.

“I am deeply appreciative of everyone who generously contributed their financial resources. I also am grateful to our development team; the UGA Foundation trustees; leaders of our schools, colleges and other units; and to our outstanding faculty, staff and students. The hard work and dedication of all of these individuals—and many others—made this significant achievement possible.”

At the conclusion of Morehead’s third year as president, fundraising at the University of Georgia continues to grow to record levels. This year’s total of $183.8 million represents an increase of 57 percent over the total raised in FY13.

The university’s eight-year comprehensive capital campaign will enter its public phase in November with a goal of raising at least $1 billion by 2020.

“Breaking an annual fundraising record is worth celebrating, but building an organization that is equipped for long-term success year-over-year is even more important,” said Kelly Kerner, vice president for development and alumni relations. “Momentum ebbs and flows throughout a campaign. Typically, the year before a public announcement is a very strong fundraising year, but the real measure will be the eight-year trend line over the course of the entire campaign.

“The goal of a campaign is to reset substantially the annual fundraising aspirations of an institution, and we have already achieved that objective as we enter the public phase of our campaign,” he also said.

Support from faculty, staff and retirees will continue to play a role during the comprehensive capital campaign.

“Gifts large and small from our faculty, staff and retirees carry significant weight. External influencers and stakeholders view UGA through a new lens—and are more likely to support it—if they see internal ‘buy in,’ ” Kerner said. “Their philanthropic support signifies their confidence in UGA in the most concrete way.”