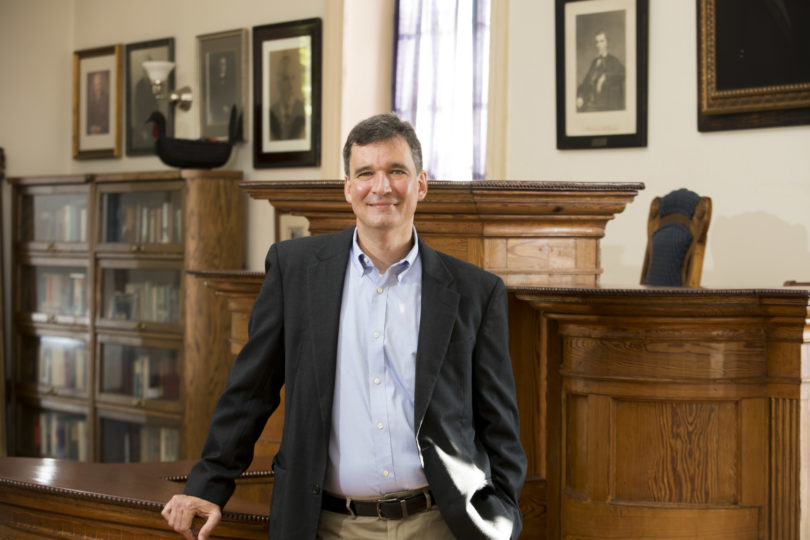 Scott Messer, director of historic preservation, starts his 18th year at the University of Georgia in November (Photo by Dorothy Kozlowski) 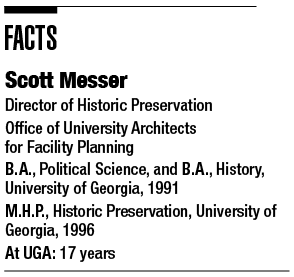 “Universities are a little different from other places in that we use buildings very hard compared to the private sector or the residential sector,” said Scott Messer, the director of historic preservation at the University of Georgia. “At this level, historic preservation is about trying to assess what is and is not important to telling our story at UGA and making sure that our actions on those historic resources don’t impact their ability to tell that story.”

Old College, constructed in 1806, is UGA’s oldest remaining structure on North Campus. The Terry College of Business Learning Community project will be completed in fall 2019 and is one of the newer projects to be constructed. There are more than 30 active projects listed on the website of the Office of University Architects for Facilities Planning. The office manages projects on all of the university’s facilities statewide.

For the most part, Messer works on rehabilitation projects. Currently, he is the primary project manager on three active projects: the Agricultural and Research Building restoration on the Tifton campus, rehabilitation of the FACS House B and the Cattle Barn Bio Lab renovations at the Skidaway Institute of Oceanography.

“First and foremost, my job encompasses project management, so I’ve probably managed 50 to 70 design and construction projects that were specifically related to historic preservation,” Messer said. “Occasionally, I’ll do new construction in buildings or areas where the new construction needs to be compatible with historic environments.

“The other part of my job is that I am the cultural resource manager for the university with regard to both historic preservation and archaeology,” he said. “I’m responsible for checking for compliance standards in the work that this office does but also with Facilities Management, Housing and all of our extended campuses and research stations—UGA-Tifton, UGA-Griffin, among others. We work statewide with all those units.”

To identify the character and materials on any of UGA’s facilities, Messer and his interns begin with an archival research process to learn what they can about a building and how it evolved as its uses changed. This helps them determine what history is associated with the building, and then, they look at a specific historical period from which to interpret. Selective demolition shows how the building was put together and what has been covered up by years of rehabilitations and adjustments.

“Once we have an idea of what the history of a building is and how it evolved and what material is there to support it, we take those pieces of information and weave them together with the users’ needs and get their program to fit into the building in a method that celebrates its historic character, rather than detracts from it,” Messer said about the process.

Messer is inspired by history rather than the architects or historic preservationists who have preceded him.

“I was the kid who really liked field trips because I understood that you learned at an increased level when you’re in the presence of history. I understood that there was a lot of value in how we maintained and preserved historic resources,” he said.

In November, Messer will mark his 18-year anniversary at UGA. He worked in private practice before becoming the campus preservation planner.