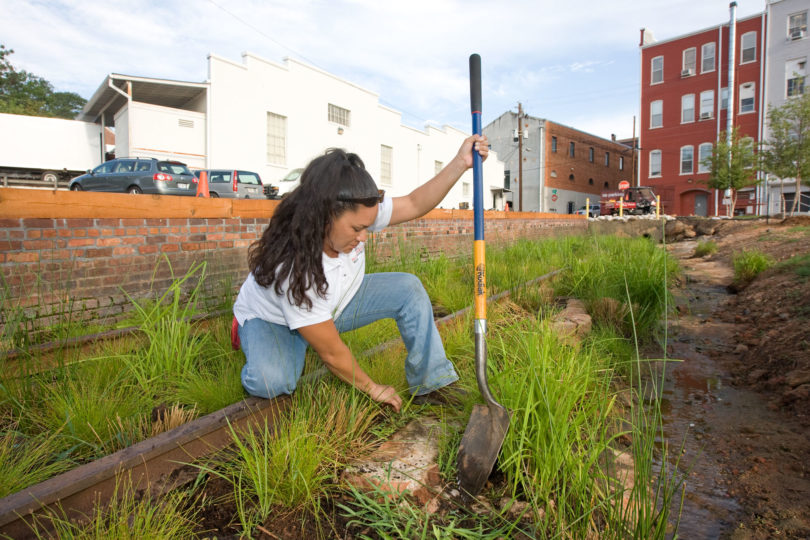 At the intersection of Fulton and Spring streets, a lush green oasis is beginning to take shape amongst the gray concrete NO4 parking lots.

Just steps from downtown, two small bumblebees frolic between purple pickerelweed flowers, birds caw and crawfish swim in a stream recently revealed as part of the Athens Town Stream Restoration Project. Campus buses still roar by, but the area is much more green than it was in spring, when the project began.

Scheduled to be completed by the start of fall semester, the project aims to restore the spring-thought to be the namesake of Spring Street-to be more reminiscent of what it used to be: a rock outcropping providing water to UGA students and Athens townspeople. The project also will help in the broader goal of making campus more green.

Physical Plant employees have mucked dirt and decades worth of debris out of what was previously a grassy shoulder behind the business services building to reveal old cobblestone streets, railroad ties and a rock outcropping thought to be the very one John Milledge mentioned in his letter to the search committee responsible for finding a location for the University of Georgia.

With its “copious spring of excellent water,” the stream is heralded as the reason UGA stands where it does today. It served as Athens’ primary water source for decades, and its water was later pumped into a cistern in the mid-1800s. Eventually covered up by a lumber yard, the stream still is only partially “daylighted,” or exposed to the open air, while much of the stream, which flows into the North Oconee River, is piped underground.

The spring may become further exposed to celebrate the university’s history. Danny Sniff, associate vice president for facilities planning, said he’d like to see the stream head, which is thought to reside under the Central Duplicating Services building, exposed one day. While there is no time frame on that project, the university’s master plan does eventually call for the elimination of the building and the small parking lots in the area-replacing them with two smaller buildings and extending green space east of North Campus into the new northeast precinct. Sniff said he’d also like a historical marker for the area.

The restoration has been a collaborative effort between facilities planning and the grounds department at UGA and Athens-Clarke County Public Works Department and its stormwater team.

Jennifer Perissi, a landscape designer, has stocked the area with water-loving native plants including spikerush, Juncus, Carex and Hydrocotle, all of which grow in the gaps between old railroad tracks.

An old brick wall has been restored with wood beams and even some authentic old railroad hardware. The old building footings also remain.

“I wanted to leave the artifacts that were here-the tracks, the cobblestones-and really do as little disturbance as possible to the stream,” said Dexter Adams, director of UGA’s grounds
department.