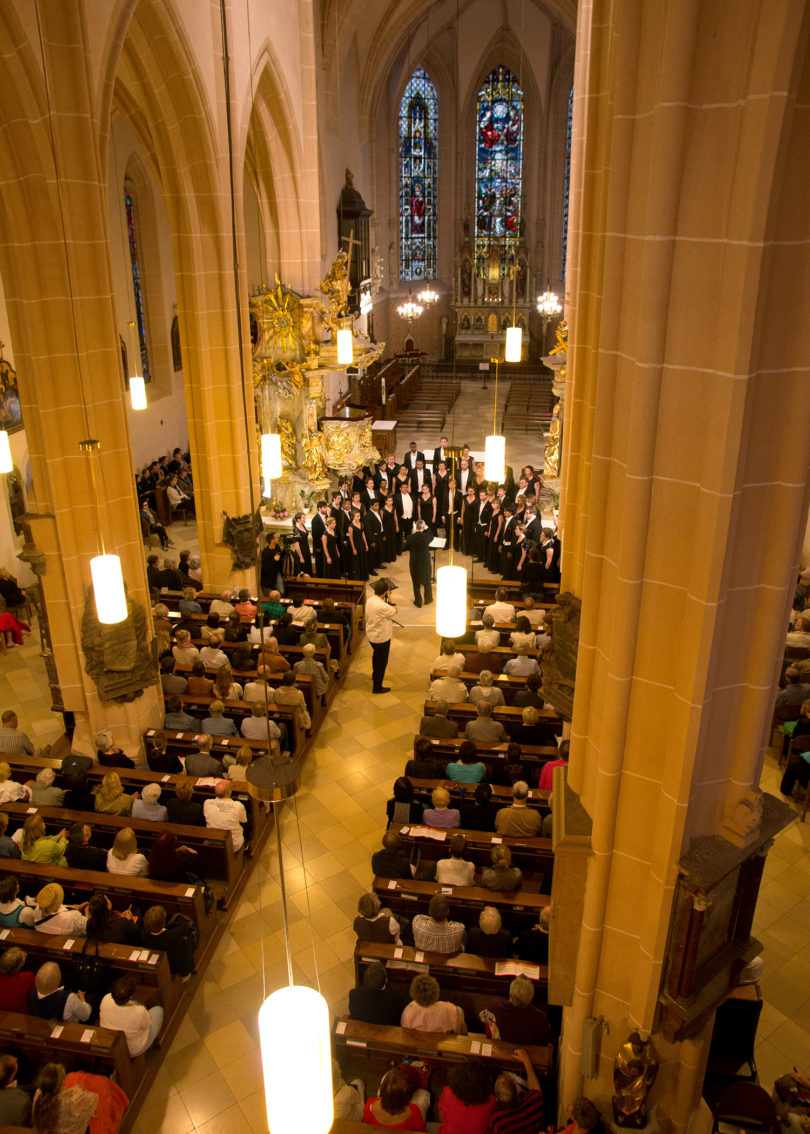 The Hodgson Singers perform at Stadtpfarrkirche St. Stephan in Baden

Athens, Ga. – The University of Georgia Hodgson Singers, the flagship choral ensemble of the Hugh Hodgson School of Music, won both first prize and the Grand Prix Ave Verum at the prestigious International Choral Competition Ave Verum on May 24 in Baden, Austria. The four-day event featured performances by choirs from the U.S., Italy, Hungary, Ukraine, Czech Republic, Austria and the Philippines, each evaluated by an international panel of judges.

“I am overwhelmed by the success of this choir on this tour of beautiful cathedrals in the Czech Republic and Austria, at the (American Choral Directors Association) Convention in Jacksonville earlier this March and in this international competition,” said Daniel Bara, director of choral activities in the Hodgson School and choir conductor. “In addition to singing beautifully, the choir has been singled out for its earnest delivery and performances that have heart.

“To have been recognized by an international audience of singers and judges at the competition feels wonderful, and I couldn’t be more proud of this collection of young men and women. And, I am truly grateful to all of the UGA administrators who have helped make this trip a reality.”

The 45-member choir, led by Bara, advanced to the competition’s second round on May 23 after performing in concert with the 10 choral groups invited to compete. The five finalists performed the following day, with the Hodgson Singers officially named first place winners and top-performing ensemble at the May 24 awards ceremony.

The international panel of judges included choral specialists from Austria, Finland, Germany, Spain and the U.S.

“Some things are just magical,” said Dale Monson, director of the Hodgson School of Music. “The combination of outstanding young voices, their sincere and earnest delivery, the leadership of one of the country’s top choral conductors, a university that understands and encourages the arts and the idyllic settings of their performances inspired all who heard them. We are so very proud of all they have accomplished.”

The Hodgson Singers structured an entire European tour around the competition, kicked off by a performance in the UGA Performing Arts Center’s Hodgson Concert Hall. Once overseas, the choir sang over the course of the week in cathedrals in Prague and Salzburg as well as Vienna’s Schönbrunn Palace, keeping an online blog detailing news, concerts and their emotions throughout their trip.

“Being a member of the Hodgson Singers for the past four years has no doubt been the most wonderful and rewarding experience of my entire life,” said Emily Skilling, a senior vocal performance major who contributed to the blog. “I could not have asked for a better way to end my senior year than with this incredible journey we have been on for the past 10 days. This tour has provided me with so many memories that I will truly cherish forever.”

The UGA Hodgson Singers were formed by E. Pierce Arant Jr. as the UGA Concert Choir in the late 1970s and serves as the ambassadorial choral ensemble of the Hodgson School. The ensemble is comprised of some of UGA’s most gifted and talented choral artists and provides vibrant, pre-professional ensemble training for the next generation of professional singers, choral music educators and interpretive artists, performing noteworthy choral repertoire from throughout the western music canon with an emphasis on unaccompanied music, recently composed works and baroque and classical masterworks.

In addition to their European tour, the choir has performed by invitation recently on the Spivey Hall Young People’s Concert Series, at the 2011 Georgia Music Educator’s In-Service Conference and the 2014 ACDA Southern Division Convention in Jacksonville, Florida. They also will be featured, in April 2015, as the final performance in the next season of the Hodgson School’s 2nd Thursday Scholarship Series.