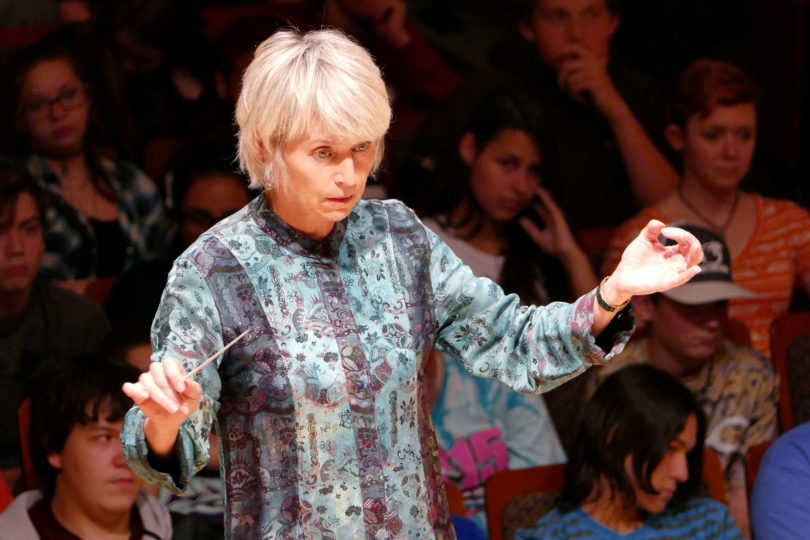 The concert begins with Lindberg’s Concerto for Winds and Percussion, written in 2003. Lindberg dedicated the piece to the Swedish Wind Ensemble and tailored each part to the players of that ensemble. Cynthia Johnston Turner, director of the Hodgson Wind Ensemble, believes her performers are equally suited to the task.

The Lindberg performance will also give the Hodgson Hall audience a preview of a performance the wind ensemble will give two weeks later at the College Band Directors National Association in Kansas City. One of 10 college ensembles playing at the national event, the Hodgson Wind Ensemble was selected by blind audition to perform for musicians from around the country.

The remainder of the evening’s program consists of works by Gershwin, whom Johnston Turner calls “one of this country’s great musical treasures.”

“An American in Paris” is one of Gershwin’s more popular works and was written following his trip to the French capital in 1926. Gershwin scored the piece for the standard symphony orchestra instrumentation as well as celesta, saxophones and even automobile horns—the premiere used authentic Parisian taxi horns Gershwin had brought back to the U.S.

“American” is full of the jazz influence that was present in much Parisian music of the time, but as it is meant to portray an American traveler in the French city, there is a moment where the music turns to more of a blues style, to show that “our American friend … has succumbed to a spasm of homesickness,” as Gershwin described it.

Gershwin’s most popular work, “Rhapsody in Blue,” is the final piece of the program. This performance of Gershwin’s masterpiece will see the Hodgson Wind Ensemble joined by Evgeny Rivkin, professor of piano at the Hodgson School.

The piece, commissioned to be a concerto-like work for an all-jazz concert and written and premiered in 1924, was initially met with mixed reviews from mainstream critics. But the public made its opinion clear immediately: The band that premiered “Rhapsody” performed the piece 84 times over the next three years, and the recording of the work sold a million copies in that span.