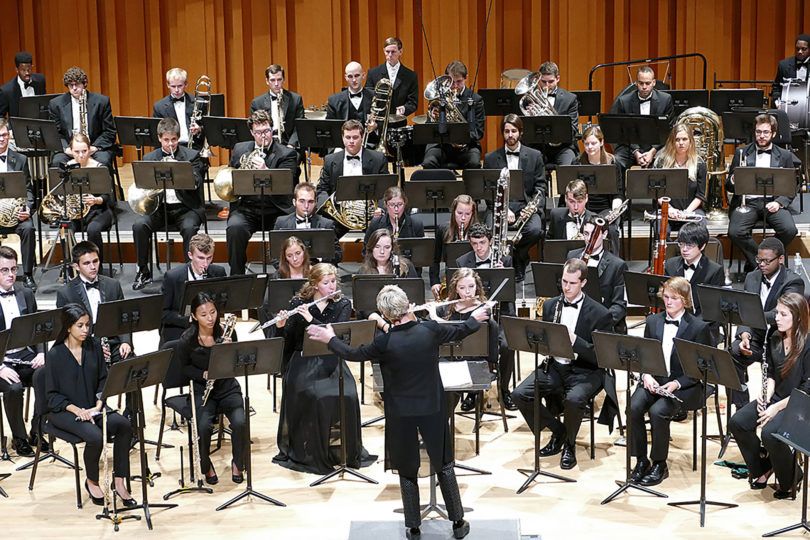 In both theme and sound, the audience attending the next performance in the Hugh Hodgson School of Music’s Second Thursday Scholarship Series will experience an evening of epic proportions.

The Hodgson Wind Ensemble takes to the Hugh Hodgson Concert Hall stage Nov. 12 at 7:30 p.m. for the November edition of the School of Music’s popular concert series.

Tickets are $18 each or $5 with a UGA student ID and are available at the Performing Arts Center box office, by calling 706-542-4400 or by visiting pac.uga.edu.

Maslanka, an American composer born in 1943, is known for powerful, grand compositions, but his Symphony No. 8 stands out even among those.

“His large-scale works reflect his strong connection to nature and its power to heal, but the 8th Symphony goes deeper,” said Cynthia Johnston Turner, HWE director and director of bands at the School of Music. “This is a musical celebration of life: new life, connectivity from the past to the future, great hope, great faith, joy, vision and fierce determination.”

“Audivi Media Nocte,” which translates to “I heard, at midnight,” was written by Swiss composer Waespi as “a kind of concerto grosso for groups of soloists, but in highly unusual instrumentations,” according to Johnston Turner. It, like Maslanka’s piece, digs deep into the existential.

“This piece also explores a deep connection between the past (inspired by Thomas Tallis’ motet of the same name) and the present,” Johnston Turner said. “It is a musical tale that oscillates between contemplation and frivolity, between deep prayer and absolute rave.”

The Second Thursday Scholarship Series began in 1980 and continues the tradition of “Music Appreciation Programs” started by Hugh Hodgson in the 1930s.