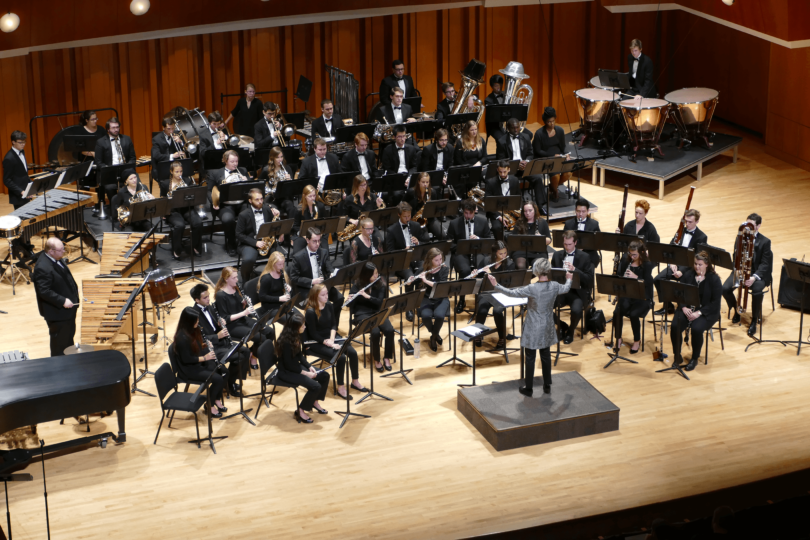 The concert will take place April 19 at 7:30 p.m. in Hugh Hodgson Concert Hall.

Under the baton of Bradley Esau, a graduate conducting student, the Hodgson Wind Ensemble will begin with Punch!, a brass fanfare by Australian composer Katy Abbott.

The mainstay of the program is a suite by Adam Schoenberg titled Picture Studies, a 21st-century ­approach to Russian composer Modest Mussorgsky’s Pictures at an Exhibition.

“The suite is made up of tuneful, rhythmic, engaging and beautifully scored responses to art, including Van Gogh, Miro and Kandinsky,” Johnston Turner said.

While these pieces are being performed, visual renderings of the artwork will be projected. The combination of the visuals and the music highlights the difference between viewing art in a museum and listening to music in a concert hall. In a museum, a viewer can move on to the next piece if one doesn’t resonate as much. However, with live music, the audience must stay in the same space with the performance.

“What Schoenberg has done is forced me to look deeper into a piece of art that I otherwise wouldn’t study,” Johnston Turner said. “In the process, I have been charmed at the discovery of elements that
I didn’t see at first glance.”

The Hodgson Wind Ensemble is transformed into a jazz “big band” for Riffs! by composer Jeff Tyzik. The piece includes a jazz drumming solo, featuring percussionist Timothy Adams, the Mildred Goodrum Heyward Professor of Music. Throughout the piece, the performers will take the audience on a journey of swing styles and an Afro-Cuban groove.

For those unable to attend this event, the concert will be streamed at music.uga.edu/streaming.