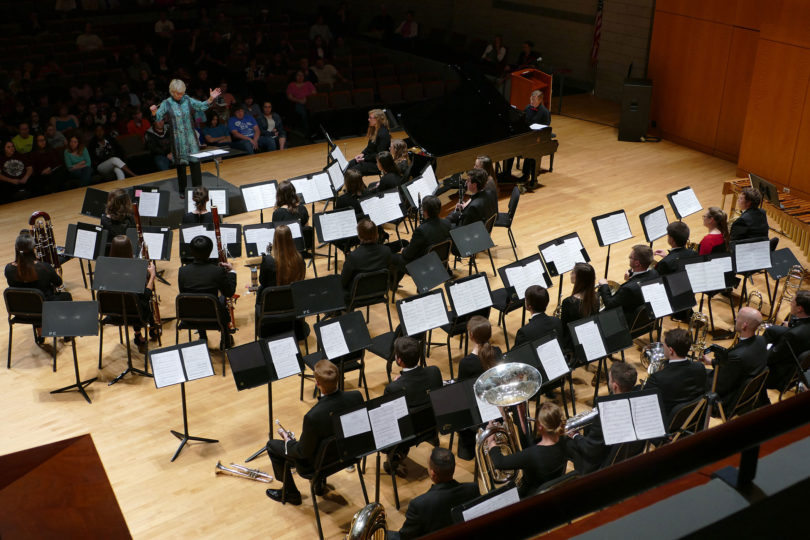 The Hodgson Wind Ensemble’s final concert of the year features improvisation, works and performances by Hugh Hodgson School of Music faculty, and a significant musical contribution from the audience itself April 4 at 8 p.m. in Hodgson Concert Hall.

The HWE program, “All That Jazz,” highlights the adventurous spirit of that form when it is not highlighting the form itself. Experimentation, exploration, improvisation—the Hodgson School’s premier wind band will embrace the driving principles of jazz in a variety of ways.

Perhaps the most adventurous, ambitious piece on the program, “Honeycomb,” by D.M.A. composition student Cody Brookshire, upholds the jazz traditions of bold innovation and collaboration. In this piece, the audience’s mobile devices become musical instruments.

The concert makes room for traditional jazz with “And It Happened…” by Mike Titlebaum.

Brandon Craswell, associate professor of trumpet, features in the performance and will take on the roles of Miles Davis, Louis Armstrong, Dizzy Gillespie and more.

The final piece on the program is Ron Nelson’s “Passacaglia (Homage on B-A-C-H).”

Tickets to the concert are $12 each or $6 with a UGA student ID and can be purchased at pac.uga.edu or the PAC box office. Those unable to attend can watch the concert live on the Hodgson School’s website at music.uga.edu/streaming.