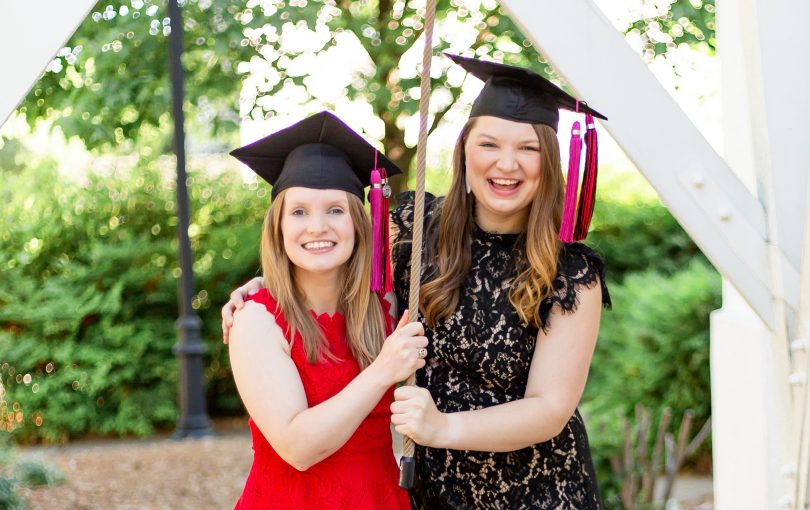 Sisters Amelia (left) and Megan Holley will graduate together with UGA degrees in human development and family science in May 2021. After starting at another college, Amelia just wanted to be near her younger sister, so for the past two years they’ve taken many of their classes together. (Photo credit: Megan Holley Photography)

Sisters say the "happiest place on earth" is where they're together

The first song Amelia Holley wrote still exists on YouTube and a Facebook page that was last updated five years ago.

For the cover art of her first single, “No One to Save Me,” the 16-year-old Amelia is smiling in a turquoise dress, guitar hanging from one shoulder, long red hair flowing down the other shoulder from under a straw cowboy hat.

The lyrics hint at a darkness that betrays the youthful optimism of the girl in the photo:

“Life’s a headache, the pain sometimes,

I don’t want to be strong, I just want to survive.”

“That was her life’s dream, to be a singer-songwriter,” said Amelia’s father, Billy. “But she changed her dream, and that’s OK.”

Amelia, who will graduate alongside her younger sister Megan this week with a degree from the College of Family and Consumer Sciences, was born with hydrocephalus and Dandy-Walker syndrome.

“Those are really big words that just mean I shouldn’t be able to walk or talk or do anything I can do,” she said. “Until I was 18, I was basically a normally functioning child.”

By the time she finished high school, Amelia had endured over 50 brain surgeries, most of them to clear the shunt in her head that would clog with fluid and create “horrific, potentially life-threatening headaches,” said her mother, Claire.

“The first three months of her life we were in and out of the hospital every couple of weeks,” Claire said. “There were a lot of scary moments as a baby.”

In sixth grade, Amelia discovered a passion for singing and writing songs. Inspired by Taylor Swift, she found an outlet through music and soon began performing around her home in Sandy Springs, often accompanied by Megan, 18 months her junior.

“Any time she would come home from the hospital, it was like one of the best days of my life,” Megan said.

By her senior year, Amelia had been accepted into Belmont University’s singer-songwriter program.

“That was going to be her career,” Billy said. 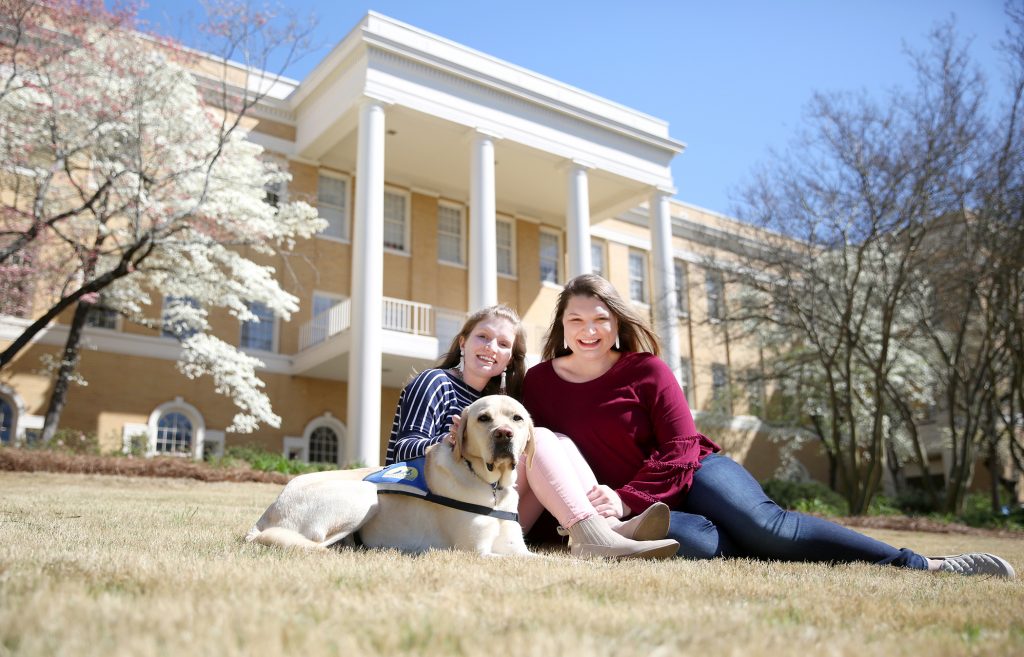 Two weeks after her acceptance letter arrived in the mail in January 2016, Amelia had a stroke following exploratory surgery in New York. As her daughter remained unresponsive for days in a coma-like state, Claire called Billy back in Atlanta and told him he needed to join her.

“It was the scariest time of my life as a father,” Billy recalled. “I remember my mother asking if Amelia was going to come back. I told her ‘I don’t know.’”

After six weeks in the hospital, Amelia was moved to the Shepherd Center in Atlanta to rehabilitate, her life’s course forever shifted.

“I watched her relearn how to walk, how to eat, how to drink,” Megan said. “She never stopped trying, never got down about the fact she wasn’t going to go to Belmont. She just never stopped pushing.” 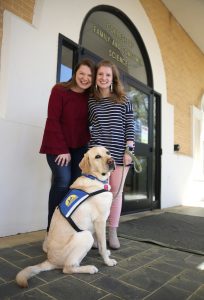 Megan (left) and Amelia Holley pose with Amelia’s service dog, Spencer, at the College of Family and Consumer Sciences. (Photo by Cal Powell)

By Amelia’s sophomore year at Oglethorpe, she had progressed from needing a wheelchair to being able to drive and live independently, and she longed to be near Megan again – and to be at UGA.

“I was living in the sorority house and she’d show up with all her things and sleep on the futon,” Megan, said, laughing. “She realized she wanted to be here.”

Amelia’s UGA acceptance notification came during a family trip to Disney World. The sisters celebrated with a milkshake.

“She really wanted to go to Georgia,” Claire said. “She’s always had a strong will and a really strong faith. Our whole family does. We’ve had people from all over the country praying for us, and we’re strong believers in the power of that.”

The two sisters, separated so often by Amelia’s frequent hospital visits, are practically inseparable now. They live together and share the same major — human development and family science — and have been in most of the same classes the last two years.

“She was my best therapist,” Amelia said. 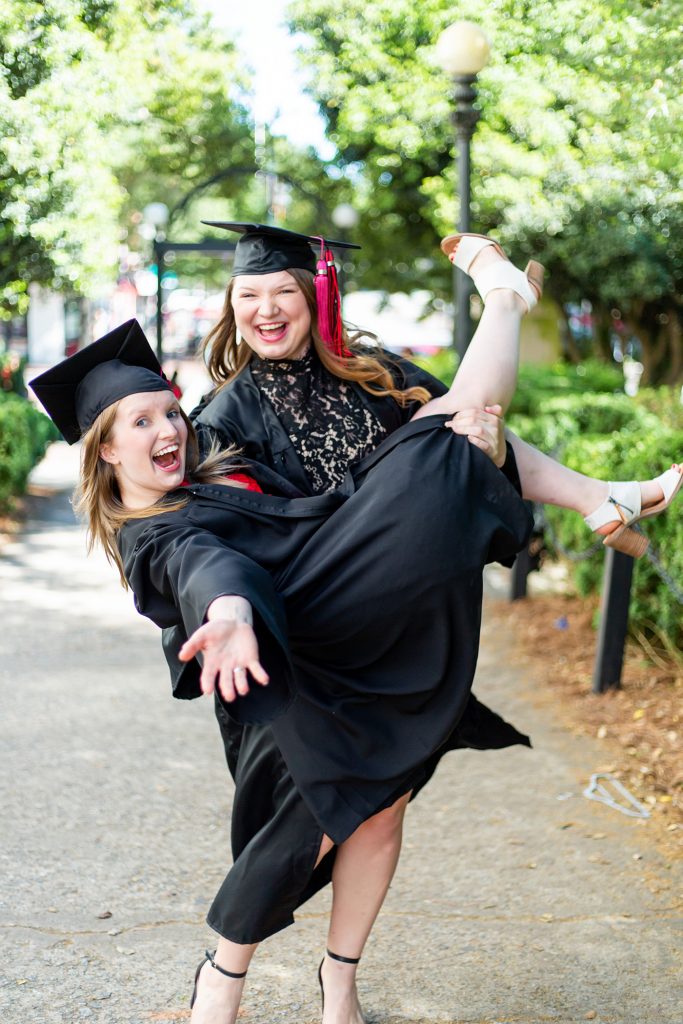 For sisters Amelia (left) and Megan Holley, the “the happiest place on earth” is where they’re both together. (Photo credit: Megan Holley Photography)

On Saturday, they will sit in Sanford Stadium together and celebrate a milestone neither would have predicted. Billy and Claire, both UGA graduates, will be watching along with a large cheering section.

“My mom is 85 and she hasn’t been out much due to the pandemic, but she said ‘I’m not missing this,’” Claire said. “We’re all so excited to be able to be there.” 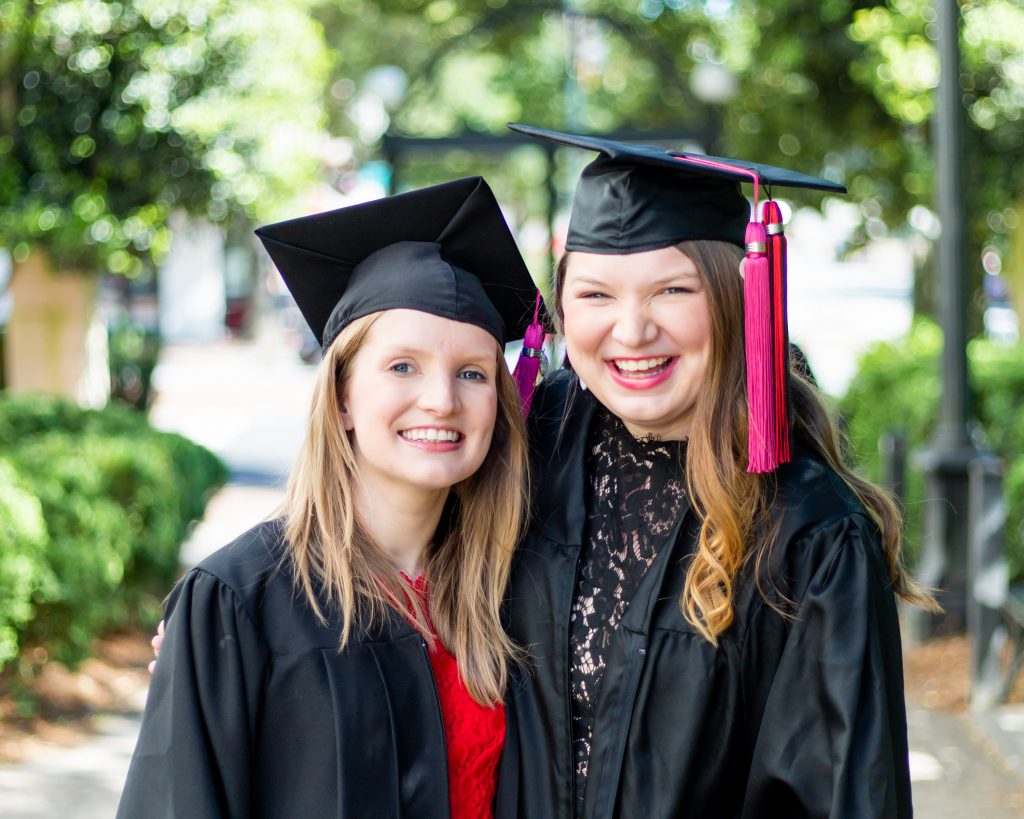 Following graduation, Amelia will pursue a Child Life internship, with eventual plans to become a Child Life Specialist, supporting the social and emotional needs of children and families in health care settings.

Megan plans to continue building her growing photography business, Megan Holley Photography, a passion she discovered during middle school that she credits with helping her cope with the anger and fear she experienced during the worst of her sister’s trials.

She’s also discovered a love for children and has served as an intern and social media coordinator for Extra Special People, a local nonprofit that provides programming for people with disabilities and their families.

“There were definitely moments it was hard and taxing and a lot of times it was a struggle, but there were also a lot of beautiful things that came out of it,” Megan said of the family’s journey. “It definitely made us stronger and more rooted in our faith and just very connected as a family.”

Amelia hasn’t given up on music entirely. While the stroke has made it more difficult to play the guitar, she said it’s likely she’ll return to it someday.

For now, she’s excited to pursue her passion for helping children cope with the anxieties of hospitals and surgeries, grateful her own journey, while often painful, has created a new world of possibilities.

“She sees it as an opportunity to use this hard thing in her life to help other people,” Billy said. “Even though it’s been hard for us as parents and I’m sure hard for her to change her dream, it’s also been really rewarding to see her so excited about this new path.”