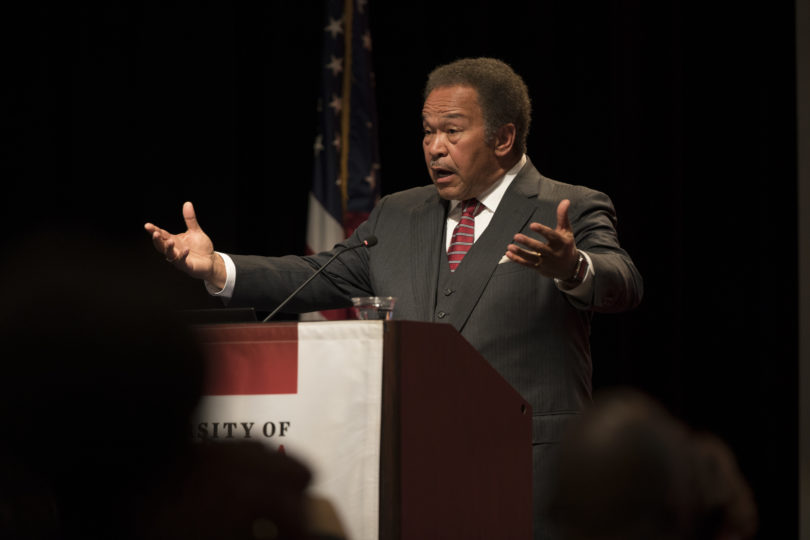 The issue is urgent, Robert M. Franklin Jr. told listeners at the annual Donald L. Hollowell Lecture, because “we are now in a state of steady moral decline—almost a nose dive.”

In a 2018 Gallup poll on perceptions of U.S. moral values, Franklin noted that 49 percent of respondents believed the state of values in America was “poor”—the highest percentage since the poll began in 2002.

The number is troubling, Franklin said, because the perception that unethical behavior is increasingly commonplace could have a snowball effect.

“Democracy requires virtue to survive. People think that if moral standards have eroded, why should they play by the rules?” That attitude could destroy social structures such as families as well as democratic institutions, he noted.

Franklin, an ordained minister, has held many leadership roles, including president of Morehouse College from 2007-2012. He currently is the James T. and Berta R. Laney Professor in Moral Leadership at Emory University.

Moral decline, Franklin believes, breeds tolerance for unconscious biases, but “adding one or two moral leaders to the equation” dramatically transforms the situation.

Franklin gave a blueprint for moral leadership by outlining three fundamental skills. First, he described integrity as a “centering down” that involves “listening for the sound of the genuine in ourselves and in others.”

“Although social justice is a team sport,” he told listeners, “when Rosa Parks engaged in civil disobedience that day in Montgomery, she sat there alone.”

Franklin said he was excited by the imaginative leadership he saw in students today who, often through social media, claim “a better vision than the status quo.”

Franklin went on to challenge his audience to name candidates for a “moral Mount Rushmore.” He began with his own suggestions: Judge Elbert Tuttle, whose court advanced equality for African Americans during the civil rights era; Rosa Parks; Virginia Dirr, who worked to abolish poll taxes in the 1930s and 1940s; and Donald L. Hollowell, the lawyer who played a key role in desegregating the University of Georgia.

Leaders need not be lawyers or judges, though, said Franklin.

“If we take seriously our integrity, courage and imagination, aimed at serving the common good, and invite others in a variety of ways to serve,” Franklin said, “moral leadership can become part of our identity, no matter what our primary vocation or calling might be.”

The Hollowell Lecture is part of the UGA Signature Lecture Series. It is annually organized by the Center for Social Justice, Human and Civil Rights and the School of Social Work.