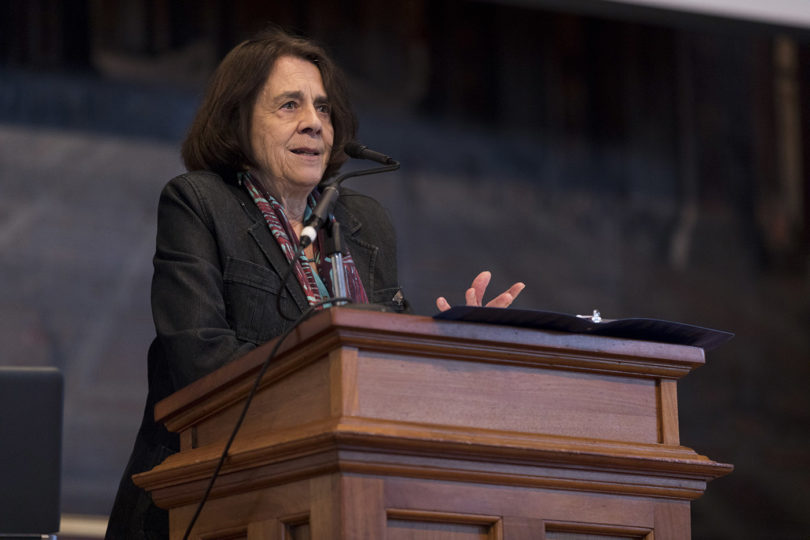 Maria Varela spoke at the School of Social Work’s 2018 Donald L. Hollowell Lecture about the lessons she learned as a photographer during the civil rights movement.

After college, Varela was invited to join the Student Nonviolent Coordinating Committee, one of the major civil rights movement organizations of the 1960s. After joining SNCC, she was asked to move to Selma, which she said terrified her, but she eventually agreed.

“They are lessons in movement building,” Varela said. “Coupled with the invitation has to be the trust of those who extend the invitation. When you are trusted with meeting expectations—and with their support—learn how to do the job, you agree to do the things you never thought you could do.”

While at SNCC, Varela taught adult education classes showing those in attendance how they could take leadership in their communities. These interactions had a major impact on Varela.

“Passion is one of those emotions that can defeat fear,” she said. “But more than losing the fear was a transformation we all went through as we worked alongside community people who mentored us in profound ways. Movement victories and defeats come and go, but the authentic transformation of movement participants is enduring.”

Varela spoke about the pain of defeat, but she believes that a victory can happen when those in pain continuously poke at an issue until the system works through it.

According to Varela, part of the honor of speaking at the lecture was learning about Hollowell, the lecture’s namesake. The late civil rights attorney was the lead counsel in Holmes v. Danner, the 1961 case that secured the right for African-Americans to attend the University of Georgia.

Varela also discussed her concerns with the great man theory of history, which maintains that history can be largely explained by great men who used their powers to create an impact. History forgets, Varela said, about thefoot soldiers and ordinary people, like Hollowell, who helped the movement. The theory, she said, also disenfranchises ordinary people from being leaders and changing the situation that they’re in because it fosters dependence on a charismatic leader to come along and change things.

“Equal to the goal of seeking change is the goal of nurturing leadership from the bottom up that will sustain efforts over decades, if not generations,” she said. “Great leaders are not the primary tool in the toolbox.”