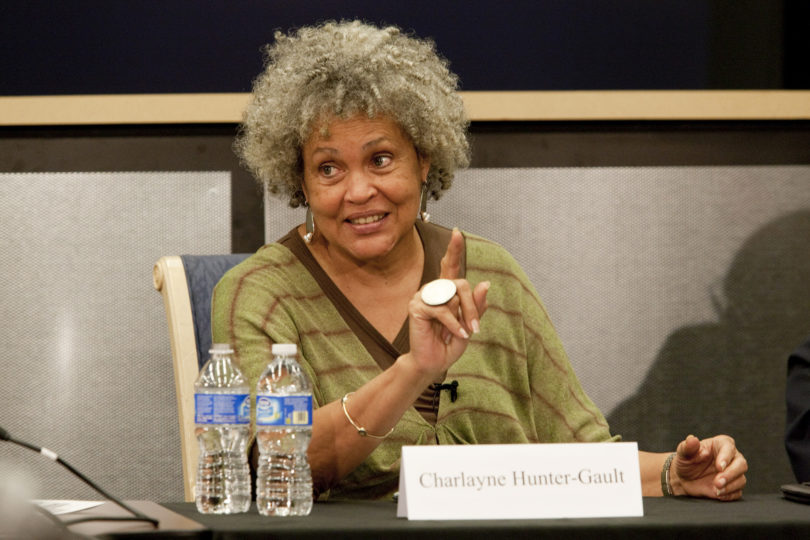 Charlayne Hunter-Gault, an award-winning journalist and University of Georgia alumna, will present the 2018 Holmes-Hunter Lecture Feb. 15 at 2 p.m. in the Chapel.

The lecture is named in honor of Hunter-Gault and her classmate Hamilton Holmes, the first African-American students to attend UGA. They arrived on campus in 1961 after civil rights leaders in Atlanta successfully challenged the segregation policy at the state’s universities. Hunter-Gault graduated from the Grady College of Journalism and Mass Communication in 1963, going on to work for prestigious media outlets like The New Yorker, The New York Times, PBS, CNN and NPR.

“We are delighted that Charlayne will return to campus to provide the Holmes-Hunter Lecture this year,” said President Jere W. Morehead. “She has achieved so much in her career as a groundbreaking journalist, and we are deeply grateful that she continues to give back to her alma mater in so many ways.”

Among numerous awards for her reporting, Hunter-Gault won two Emmys for national news and documentary coverage and two Peabody Awards for excellence in broadcast journalism, administered by Grady College. She was the first African-American Commencement speaker at UGA in 1988. In 2001, the academic building where Hunter-Gault and Holmes registered was renamed the Holmes-Hunter Academic Building in their honor, marking the 40th anniversary of the desegregation of the university.

Sponsored by the Office of the President, the Holmes-Hunter Lecture focuses on race relations, civil rights and education and has been held annually since 1985.