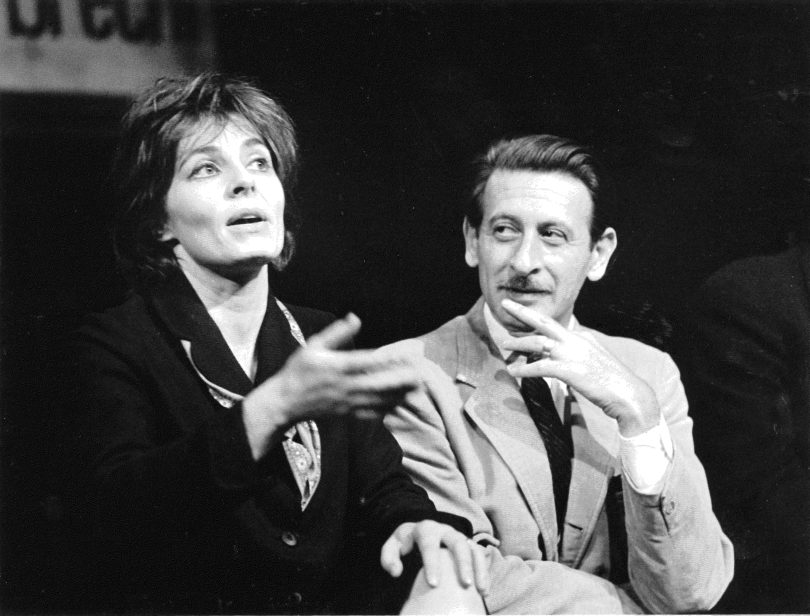 George Tabori with his wife

Athens, Ga. – The University of Georgia departments of Germanic and Slavic studies and theatre and film studies will host an international conference on “George Tabori and the Theatre of the Holocaust” Feb. 26-28. The conference, which will include speakers from Germany, Austria, England, Italy, Israel, Canada and the U.S., will examine political and aesthetic issues related to theatrical representations of the Holocaust.

The conference will highlight the work and influence of Tabori, a Hungarian-German-Jewish playwright who lived from 1914-2007. Events will be held at several locations on the UGA campus.

Tabori lived for extended periods in England, where his novels were best sellers, and in the U.S., where his screenplays were directed by Alfred Hitchcock and Anatole Litvak and his plays performed on and off Broadway. In 1971, Tabori returned to Germany and, in 1992, was awarded the Georg-Büchner-Preis, Germany’s highest literary honor. Many other awards and distinctions followed.

“Tabori’s efforts to commemorate the victims of the Holocaust on the German stage have been unparalleled and left a lasting impact on 20th century German society,” said Martin Kagel, head of the department of Germanic and Slavic studies, a scholar of Tabori’s work. “Because his plays addressed the perpetrators as well, he became an important figure of German-Jewish reconciliation.”

“Though in Germany, George Tabori is regarded as one of most acclaimed playwrights and directors of the 20th century,” added David Saltz, head of the department of theatre and film studies and co-organizer of the conference along with Kagel. “In the U.S., he is almost unknown, and his work receives scant attention from scholars. We aim to fill that void.”

Anat Feinberg will present a lecture on “‘Macht kein Theater’: George Tabori and his Theater Revisited” on Feb. 26 at 4:30 p.m. in the Richard B. Russell Building Special Collections Libraries. Feinberg, a professor of Jewish and Hebrew literature at the Jüdische Hochschule in Heidelberg, Germany, is a leading scholar in German-Jewish theater and author of “Embodied Memory: The Theatre of George Tabori” and “George Tabori,” the only biography of the playwright.

Henry Bial will present “The Funny Thing About Jewish Performance Studies” on Feb. 27 at 1:15 p.m. in the Russell Special Collections Building. Bial is professor of theatre and American studies at the University of Kansas, president of the Association for Theatre in Higher Education and author of “Acting Jewish: Negotiating Ethnicity on the American Stage and Screen.”

Freddie Rokem will present a lecture “From Tragedy to Farce” on Feb. 28 at 5:15 p.m. in Room 300 of the Fine Arts Building. Rokem is the Emanuel Herzikowitz Professor at Tel Aviv University, an authority on German-Jewish theatrical relations and the author of the award-winning “Performing History: Theatrical Representations of the Past in Contemporary Theatre.”

The conference will feature two special performances. Composer Stanley Walden will perform “Fiddlers on the Roof” Feb. 26 at 6:45 p.m. in the Russell Building. Walden was among Tabori’s closest collaborators for over 30 years. Between 1971 and 2005, the two produced some 50 works for radio, stage and screen in the U.S. and Europe. Walden will perform a selection of the works he composed for Tabori along with other compositions and will discuss his first-hand impressions of Tabori’s unique sensibility and highly collaborative and unique approach to directing.

Veteran theatre, film, TV and voice actor Roger Grunwald will perform “The Mitzvah Project” on Feb. 28 at 2:30 p.m. in Room 300 of the Fine Arts Building. This one-man play, which Grunwald wrote with Annie McGreevey, recounts the surprising history of tens of thousands of German men known as “Mischlinge,” the derogatory term the Nazis used to characterize those who descended from one or two Jewish grandparents, who served in Hitler’s army.

The conference is presented in conjunction with the University Theatre and 7 Stages’ production of Tabori’s signature play, “Mein Kampf,” directed by Del Hamilton. For more information or to view the entire conference schedule, see www.drama.uga.edu/event/tabori.