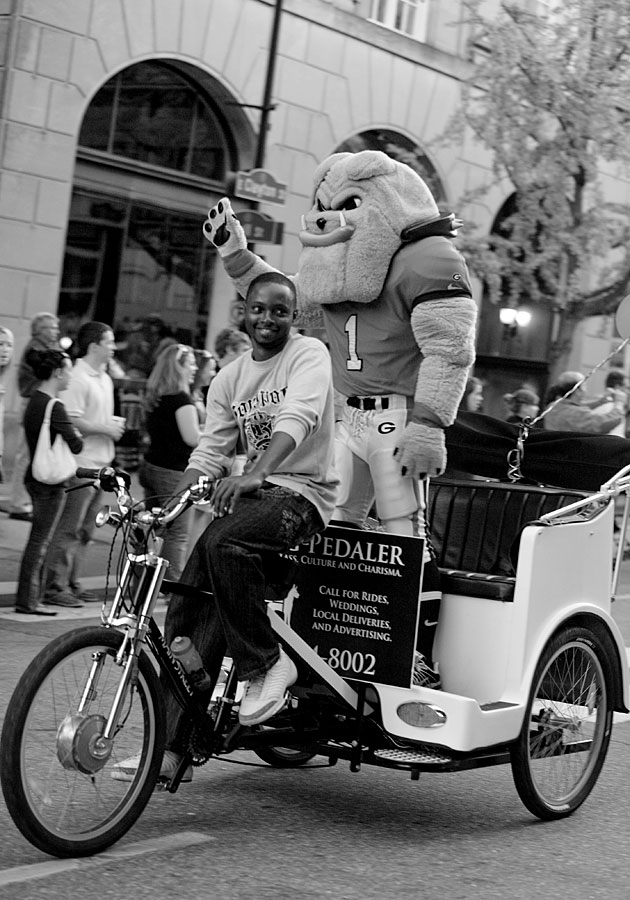 Celebrities like Hairy Dawg will be in the Homecoming parade.

The University of Georgia celebrates Homecoming Oct. 12-18 with a jam-packed week of activities including reunions, parties, a hip-hop concert, a carnival, a parade and an important Southeastern Conference football game.

“Homecoming Week 2008: A Lasting Legacy” is the theme of this year’s festivities sponsored by the Student Homecoming Committee, a part of the University Union. Activities for students are scheduled throughout the week, and the weekend is crowded with events for alumni and the Oct. 18 Georgia-Vanderbilt football game, which will feature the crowning of the Homecoming King and Queen.

Another football game highlight will be a performance by the Redcoat Band of a 100-year-old march that is believed to be UGA’s first school song. Music for the march disappeared decades ago but was discovered earlier this year, and this will be the first time the piece has been played by a band since the early 20th century.

Homecoming festivities begin Oct. 12 at 7 a.m. at Stegeman Coliseum with the Dawg Dash Fun Run, a 5k walk/run. At midnight Oct. 12, student organizations compete in a street-painting contest on Sanford Drive in front of the Tate Student Center.

The official Homecoming kickoff will be Oct. 13 from 11 a.m.-2 p.m. on the Tate Center Plaza with an event featuring displays, free food and giveaways. On Oct. 14, local restaurants will provide free food for a block party on Legion Field from 4-6 p.m.

Nationally known hip-hop artist T-Pain, who has had several Billboard magazine hit singles, will perform Oct. 15 at 8 p.m. on Legion Field. The concert is free to students with valid UGACards. Non-student tickets are on sale at the Tate Student Center cashier’s window, $20 in advance and $30 the day of the show.

On Oct. 16, students will enjoy more free food and get fired up for the football game with spirit activities at a pre-tailgate party from 11 a.m.-2 p.m. on the lawn of the Tate Student Center.

Vince Dooley, former head football coach and director of athletics, will be the grand marshal for the Homecoming Parade, which will step off Oct. 17 at 5:30 p.m. and wind through downtown Athens. Led by the Redcoat Band, the parade will include floats, displays and appearances by the UGA cheerleaders, athletes and university and Athens dignitaries.

Following the parade will be a carnival on Legion Field from 6-11 p.m. with games, midway rides and free food. It’s free for students with a valid ID card and $5 for non-students.

Complete information on all student events is available at www.uga.edu/homecoming.

Also during halftime, the Redcoat Band will play the “Red and Black March,” a tune composed in 1908 by R. E. Haughey, who directed UGA’s first band from 1905 to 1909. A history of the Redcoat Band refers to the piece as “Georgia’s first original school song,” but the music disappeared decades ago and was thought to be lost.

This summer a university employee, Lloyd Winstead, happened upon a copy of the music for sale on eBay and bought it. He gave it to the Redcoat Band, and the score has been rearranged for the 350-member band. Winstead and band officials believe the performance may be the first time the piece has been performed by a band in close to a century.

The UGA Alumni Association will hold a “Sink the ‘Dores” Homecoming barbeque Oct. 17 from 6:30-9 p.m. at the Wray-Nicholson House. John Dunn and the Jazzmen will provide music for dancing, and the UGA cheerleaders and Hairy Dawg will attend. Children’s activities include a bounce house, hula hoops and face painting. Tickets are $25 for non-student members of the Alumni Association, $15 for student members and $45 for non-members. For registration, contact Wanda Darden at wdarden@uga.edu.

After the football game the Alumni Association Multicultural Program will sponsor

“Jazz on the Lawn” at the Wray-Nicholson House. The event will include barbeque, music by the Jaspects and family activities. To register, contact Chardina Choate at cchoate@uga.edu.

The Warnell School of Forestry and Natural Resources will hold a golf tournament at the UGA Golf Course on Oct. 17. That evening the school’s alumni association will hold its annual meeting and alumni dinner and present the Distinguished Alumni and Distinguished Young Alumni awards and Warnell staff awards. On Oct. 18, a barbeque will be held at Flinchum’s Phoenix beginning at 10 a.m. For additional information, contact Bridget Harden, bharden@warnell.uga.edu.

The College of Pharmacy will conduct a professional continuing education course on medication therapy management on Oct. 18 at 8 a.m. Reunions for the college’s classes of 1983, 1988, 1993, 1998 and 2003 will begin at 9 a.m. on Brooks Mall along with a tailgate party for other alumni. If the game is on television, pharmacy alumni who don’t have a ticket to the game can watch it on a large screen in the pharmacy auditorium. Viewing is free and barbeque will be sold for $10. For registration and information for all events, call 706/542-5303.

A tailgate party for Terry College of Business alumni and friends Oct. 18 on the Brooks Hall lawn will begin three hours before kickoff and include a buffet, live music and entertainment. Tickets are $25 for adults, $12 for children ages 6-12 and free for children younger than 6. For online information and registration, see www.terry.uga.edu/alumni/tailgate/.

The School of Law graduating classes celebrating an anniversary reunion will have a candlelight dinner Oct. 17 from 7-9 p.m. on the North Campus quadrangle in front of the law school. The next day an alumni barbeque will start at 10:30 a.m. on the quad. For registration and information, see www.law.uga.edu/alumni.

The Franklin College of Arts and Sciences and the UGA at Oxford program will hold a tailgate party for alumni and friends Oct. 18 on the Park Hall patio beginning two and a half hours before kickoff. For reservations, see http://rsvp.franklin.uga.edu or call 706/542-1830.

A Grady College of Journalism and Mass Communication tailgate party on Oct. 18 will begin two hours before kickoff on the lawn in front of the college. There will be food, music and a booth with college clothes items for sale. For reservations, see www.grady.uga.edu/homecoming.

The School of Public and International Affairs will hold a tailgate party for alumni, faculty and staff Oct. 18 on Herty Field beginning two and a half hours before kickoff. A $5 donation is suggested. For information and reservations, contact Joy Holloway at joyh@uga.edu or 706/410-5182.

The College of Environment and Design will host a tailgate party for alumni, faculty, students, staff and friends Oct. 18 beginning at 9 a.m. in the Founders Memorial Garden Courtyard. The event is sponsored by Design Associates and Clay Mooney of Asheville, N.C., a 1979 graduate of the college.