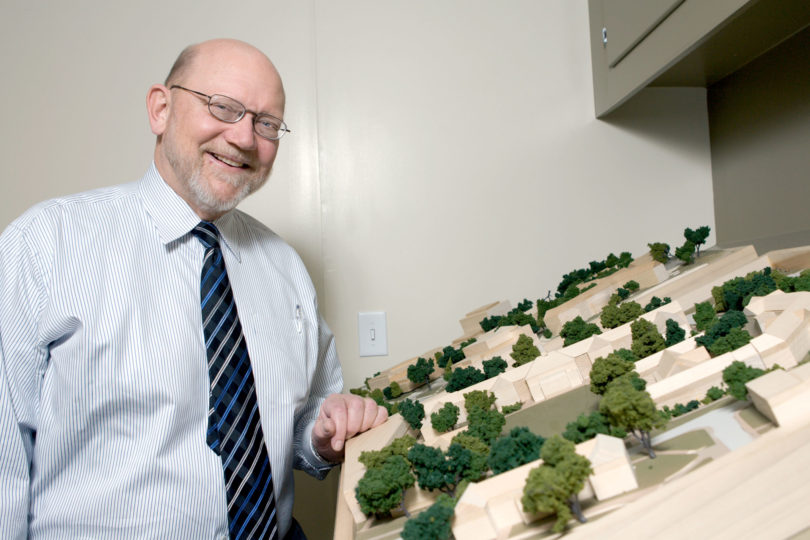 Just inside the door of Jim Day’s office stands a pair of tall, black boots caked in red clay. Day, executive director of university housing, keeps them handy for impromptu visits to construction sites or to survey “the odd broken water pipe,” he says.

As a balance to the sturdy, hulking boots, an eclectic art collection covers his walls: ceramic fish and watercolors made by his artist wife, Ellen, a folk painting by local artist Peter Loose and a photo by his brother of a mystical-looking Belize jungle scene. Curious little wooden toys and games line the windowsills. There’s a Zen garden near his desk, filled with the usual sand, but with the added feature of one of Ellen’s ceramic flounders flopped in the middle. A photo of his granddaughter, Amelia, is prominently displayed.

Against this somewhat quirky backdrop, Day is both modest and affable as he recounts his career at UGA, from which he will retire on April 1.

“I sort of fell into this work by chance and stayed with it,” he says.

Day was born in Detroit, and as his father was in the U.S. Air Force, the family moved frequently.  Day himself joined the Marines after a short stint at the University of Miami—where he served as a resident adviser in his residence hall—and then returned to college at Florida Atlantic University, where he graduated with a psychology degree in 1970. Unsure of what to do next, he followed friends to graduate school to study student affairs administration.

The subject he fell into “by chance” turned out to suit him well, and he received his M.Ed. in college student personnel services in 1972 from the University of Miami, and his Ph.D. in higher education from Iowa State University in 1987.

After involvement in directing the residence programs at Ball State University, the University of Wisconsin at Oshkosh and Iowa State University, Day came to UGA in 1990 to be both director of University Housing (his present title was given in 2004) and an adjunct assistant professor in the College of Education.

“Georgia is the place I’ve worked the longest, and I’ve really developed an affinity for it,” he says.

Day has seen a lot of growth at UGA in his time here, he says—including the development of the physical campus, expansion in enrollment and the higher admission standards linked to increased demand of applicants.

Day lists other achievements he is proud of, most of them collaborative efforts with other departments on campus—the residential language communities; the Franklin Residential College; Honors magnet hall; first-year student leaning communities; academic advisers making their offices in residence halls; and the Freshman College Summer Experience, in which 275 freshmen move into Russell Hall in July and take two classes and participate in an intense orientation.

In partnering with other departments on campus, “We’ve really increased opportunities for students to become meaningfully engaged in the university community as scholars and citizens,” says Day.

He hopes to be able to continue to work at UGA part time, and plans to spend most of his time traveling and reading for pleasure, “as opposed to what I think I must read for work.”

He also plans to devote some time to bicycling and saltwater fishing. Athens will remain his home base.

“Having had the opportunity to live and work in lots of places before coming here, it wasn’t very long after we got here that we felt like this would be our home, both UGA and the Athens community” he says. “It’s been an honor and a pleasure to be here.”