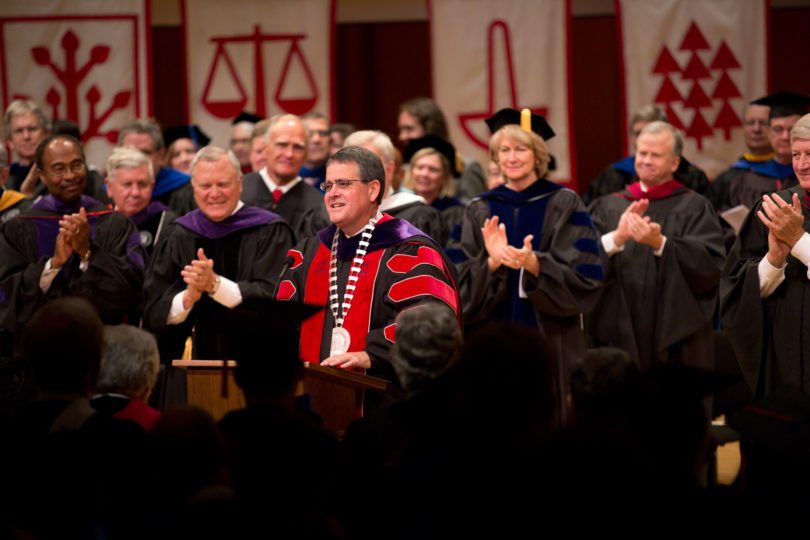 The audience applauds University of Georgia President Jere W. Morehead after he received the chain of office and breastplate during his investiture ceremony on Tuesday

UGA’s 22nd president, Jere W. Morehead, was presented with the chain of office and the ceremonial breastplate emblazoned with the university’s seal during the investiture program held Nov. 19 in Hugh Hodgson Concert Hall.

State and local officials joined the university community of faculty, staff, students and alumni in witnessing the historic affair.

During the ceremony, Morehead restated his commitment to the university and the state.

“My core belief about the University of Georgia is a simple one: What we do here matters,” Morehead said. “It is important, and not just to the students and faculty and staff; it is important to the citizens of Georgia.”

An investiture is a traditional higher education ceremony in which the leader of the institution is vested with the garments, insignia or ornaments signifying the authority of the office.

UGA’s breastplate, presented to Morehead at the ceremony by Hank Huckaby, chancellor of the University System of Georgia, is the vestment worn by the university president at Commencement and other university ceremonies. It is a silver medallion attached to the chain of office. The links on the chain list the current and past presidents of UGA.

During the ceremony, Georgia Gov. Nathan Deal joined other state and local officials as well as university leaders in offering greetings to Morehead.

The governor said Morehead’s vision of collaboration, both with other Georgia institutions of higher learning and with the private sector, would be beneficial for the university and the state.

After receiving the vestments, Morehead took the opportunity of his investiture to state his vision for UGA’s future. His remarks addressed some of the major points in the university’s strategic plan for 2020, “Building on Excellence.”

Morehead said the plan “defines the world that the university inhabits both today and in the future-a world which not only rewards but requires interdisciplinary, collaborative, inclusive thinking and action.”

A video and transcript of the investiture address is online at http://president.uga.edu/index.php/statements_remarks/detail/public_appearance/investiture-address.