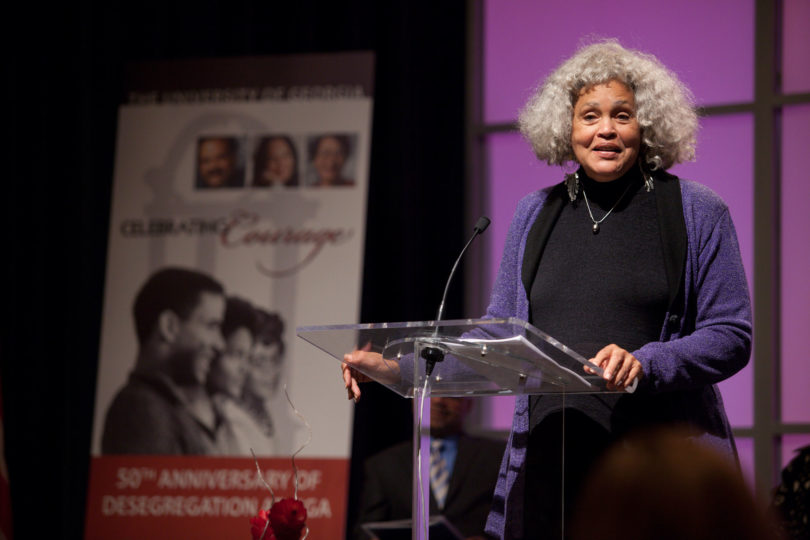 During the 50th Anniversary Lecture

Award-winning journalist and UGA alumna Charlayne Hunter-Gault will receive DiGamma Kappa’s Distinguished Achievement in Broadcasting Award on Feb. 8 at 6:30 p.m. Hosted by the Grady College of Journalism and Mass Communication, the ceremony is open to the public and will be held in the South ­Journalism-
Psychology Auditorium. Following the presentation of the award, Hunter-Gault will give a public address.

Based in Johannesburg, South Africa, Hunter-Gault is a distinguished journalist and author who has made a success of challenging convention with her fresh insights on issues both close to home and of global impact.

“Grady College is honored to count Charlayne Hunter-Gault among its alumni,” said E. Culpepper Clark, dean of the Grady College. “The global scope of her career is truly inspirational. We invite all students and the UGA community to join us in welcoming her and celebrating her exceptional career.”

With more than 40 years in the industry, Hunter-Gault has extended her work at various times to all media, beginning her career as the first African-American reporter for The New Yorker before working as a local news anchor for WRC-TV in Washington, D.C.

Known for her “people-centered” journalism, she went on to serve as the Harlem bureau chief for The New York Times and has written articles for Essence, Ms., Life and O, The Oprah Magazine.

Hunter-Gault joined NPR in 1997 after 20 years with PBS, where she was a national correspondent for The NewsHour with Jim Lehrer and where she also anchored the award-winning newsmagazine on human rights, Rights and Wrongs.

In 1999, she joined CNN as the network’s Johannesburg bureau chief and chief correspondent in Africa. Hunter-Gault introduced viewers to a diverse continent she once called “one of the greatest challenges that we in the media face.” In 2005, she returned to NPR as a foreign correspondent based in South Africa.

Hunter-Gault is also author of the 2006 New News Out of Africa: Uncovering Africa’s Renaissance (see Weekly Reader) and 1992’s In My Place, a memoir of her role in the civil rights movement as the first African-American woman admitted to the University of Georgia.

The Grady College also will announce and formally introduce its first Charlayne Hunter-Gault Distinguished Writer-in-Residence at the ceremony. A reception will follow in the Grady College’s Peabody Suite.

DiGamma Kappa is the nation’s oldest professional broadcasting society for students and was founded at UGA’s Grady College in 1939.