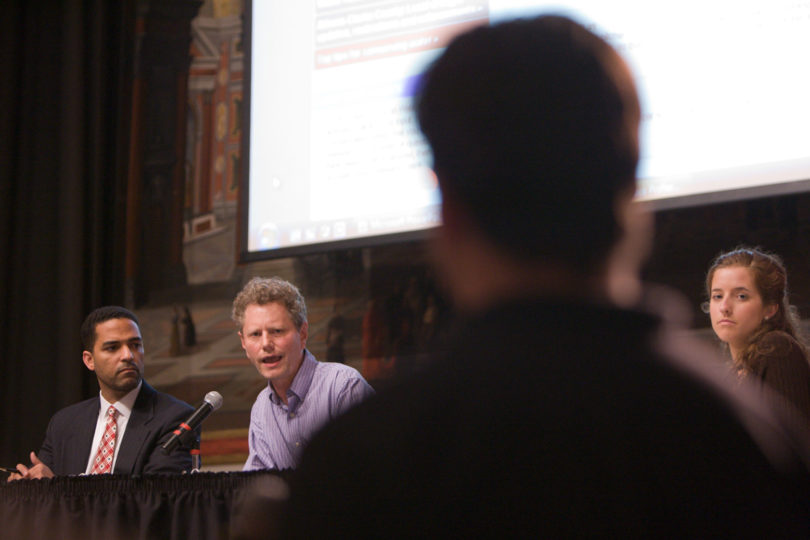 The university is already lowering water consumption to combat the drought, but more measures soon will be added. In the meantime, UGA is looking for suggestions, members of the ad hoc task force on water resources said in a public forum at the Chapel on Oct. 23.

The forum served to educate the public on steps the university is taking to reduce its water use, reiterate the severity of the drought and allow faculty, staff and students the opportunity to comment.

While the task force is hesitant to advocate institution-wide recommendations until submitting its report, members openly talked about a public awareness campaign the force already has begun to launch. In addition to the Web site (www.uga.edu/aboutUGA/water_tips.html) which provides tips on water conservation (See News to Use, page 2) and allows the university community the opportunity to submit their own tips, the campaign plans to increase awareness through other media, both on and off campus.

Members of the campus community already have begun to act. Ralph Johnson, associate vice president for the Physical Plant, reported on steps the university already has undertaken to lower consumption.

The Georgia Center for Continuing Education Conference Center and Hotel is washing guests’ sheets every third day, unless requested to wash them more frequently. Its restaurants are not serving water unless specifically asked, just like other restaurants in Athens, Johnson said.

Employees in the Physical Plant are responding to water leaks and drips as emergencies, and all are carrying low-flow devices with them to save time on repairs.
Johnson also shared steps the university began taking in 2004, after an audit showed water-use functions that  could be improved. So far, the university is about 60 percent complete in converting its faucets, showerheads and bathroom devices to low-flow appliances. Replacements are made as money is available, he said, and all new construction is outfitted with low-flow devices.

“This is a once-in-a-century drought and it’s not just in Athens and not just in North Georgia,” said Pam Knox, assistant state climatologist and a faculty member in engineering. “It’s not your everyday typical drought.”

Athens averages about 48 inches of rain per year, but has fallen behind in the past 15 years, resulting in a deficit of about 60 inches. “Our winter may be warmer and drier than usual,” she added. “That doesn’t mean we’re not going to see rain at all. We might see heavy rains, but it means that there still may be a deficit.”

With less-than-ideal predictions about water returning to its average level in the near future, any recommendations will need to help foster long-term behavioral changes as well as short-term relief, according to Lonnie Brown, associate professor of law and administrative fellow in the provost’s office. Brown co-chairs the task force with Kathy Pharr, assistant vice president for finance and administration.

“What we ultimately want to create is a culture of conservation at the university,” Brown said. “There are plans that have been put in place already and hopefully we can sustain these changes over the long-term.”