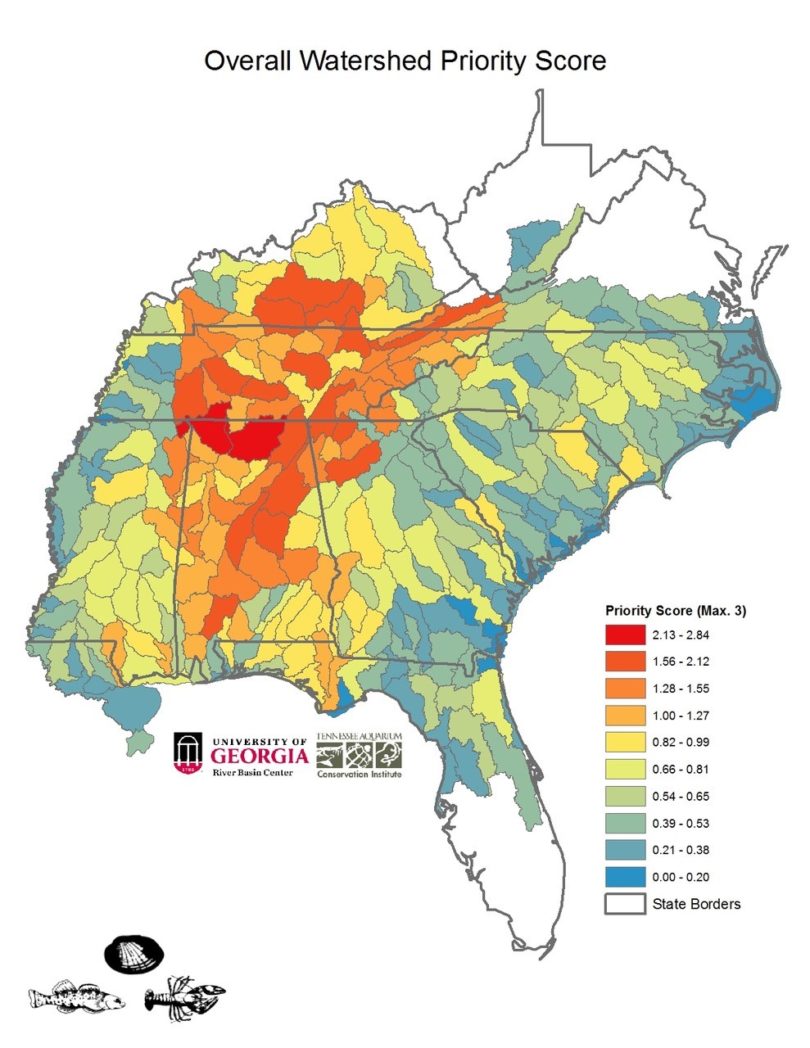 Researchers at the River Basin Center and the Tennessee Aquarium Conservation Institute have scored the watersheds of the Southeast for the conservation priority. Although the aquatic systems across region as a whole support very high biodiversity

Athens, Ga. – After more than a year of data collection, analysis and mapping, the University of Georgia River Basin Center and the Tennessee Aquarium Conservation Institute recently published a comprehensive survey of Southeastern watersheds and the diverse aquatic wildlife that live in these freshwater ecosystems.

The study’s creators say they hope it will serve as a master plan to guide research and conservation work that will ensure the long-term survival of these waterways, which have suffered from intensive human development.

“Rivers and streams in the U.S. are the arteries that flow through our landscape, and they carry a measure of the health of the landscape with them,” said Tennessee Aquarium Conservation Institute Director Anna George. “Right now, those rivers are having heart attacks.

“What we’re doing is like visiting a doctor to learn how to take better care of the health of our rivers. We’ve identified some of the most important places to start a small change in our habits and how we take care of our waters.”

Scientists scored each watershed based on three characteristics: the number of species it contained, the conservation status of those species and how widespread each species was. Areas containing a greater variety of species, large numbers of endangered or threatened species or species found in few or no other locations were ranked higher.

According to the study, the 10 highest-priority watersheds are:

The report uses colored heat maps to represent the variety of species in a given area-warmer colors indicating greater diversity-and are based on the distribution of more than 1,000 fish, crayfish and mussel species in almost 300 watersheds spanning 11 states. The vivid red-and-orange bull’s-eye centered on middle and southeast Tennessee, northwest Georgia and northern Alabama shows why this region is so biologically significant.

Experts place the region’s plethora of aquatic wildlife on equal footing with that of species-rich tropical ecosystems. More than 1,400 species reside in waterways within a 500-mile radius of Chattanooga, including about three-quarters of all native fish species in the United States. More than 90 percent of all American mussel and crayfish species live within that same area.

“The Southeast’s rich aquatic communities are globally significant,” said Duncan Elkins, the study’s coordinator and a postdoctoral research associate at the University of Georgia River Basin Center, based in the Odum School of Ecology. “There’s nothing else like our biodiversity anywhere else on the continent or anywhere else in the temperate world.”

More than a quarter of the species included in the study are unique to the region, and some of them are struggling. Twenty-eight percent of Southeastern fish species, for example, are considered imperiled, more than doubling during the last 20 years.

The publication of the Tennessee Aquarium Conservation Institute and River Basin Center study, which was funded by a National Fish and Wildlife Foundation grant, comes at a crucial time for Southeastern aquatic ecosystems.

Efforts to study and safeguard freshwater species in the region continue to struggle due to anemic funding and a lack of federally protected lands, especially compared to less-diverse regions, such as the Western United States.

“The Southeast has an incredible number of species, and it’s really important that we focus our attention on protecting places where we can get the most bang for our buck,” George said. “This project allows us to visualize, across the Southeast, where those places are that are so critically important for our water and wildlife.”

A full version of the study is available online at http://southeastfreshwater.org/prioritization.