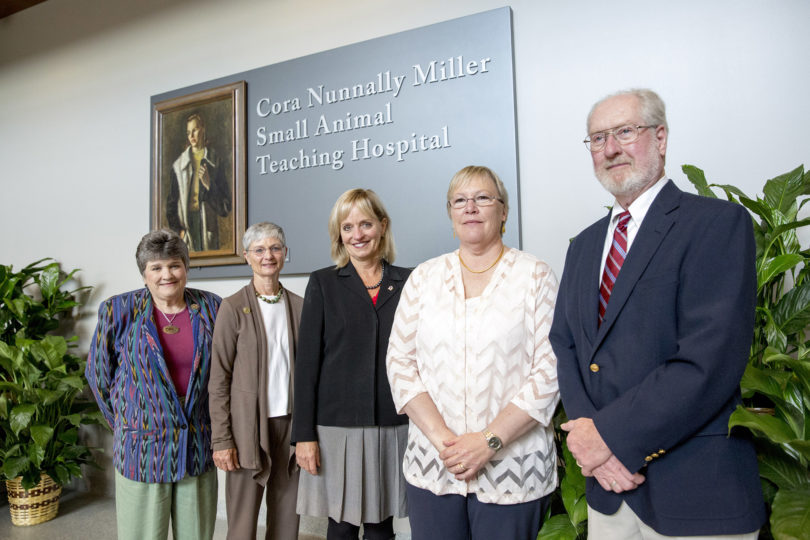 The UGA Veterinary Teaching Hospital has renamed its Small Animal Hospital in honor of Cora Nunnally Miller, a donor who gave more than $13 million to the College of Veterinary Medicine.

The name change was made official Nov. 3 during a dedication ceremony that included the unveiling of a portrait of Miller that was painted when she was a teenager by Lamar Dodd. The portrait was donated to the college as part of Miller’s estate and now hangs in the hospital’s small animal lobby.

“Cora Miller was a very distinguished woman who sought no recognition for her generosity, taking great satisfaction in simply learning about the impact of her philanthropy,” Dean Sheila W. Allen said during the ceremony. “We proudly honor her transformational gifts to the college by naming the Small Animal Hospital the Cora Nunnally Miller Small Animal Teaching Hospital.”

Miller, who passed away at her home in July 2015, loved horses, dogs and the field of veterinary medicine. Of her gifts, more than $7 million was designated for building the college’s new, state-of-the-art teaching hospital, which opened in March 2015. The remainder of her contributions resulted in several endowed chairs and professorships for the college as well as the Service Animal Fund for animals devoted to serving people such as assistance dogs and military and police dogs.

“We continue to benefit from her incredible generosity to the college and to the University of Georgia as a whole,” Allen said.

Her gifts to UGA totaled more than $33 million throughout her lifetime and included contributions to the Hugh Hodgson School of Music, the Honors Program and the Franklin College of Arts and Sciences. She granted permission for the university to acknowledge her gifts only after her death.